In the Jali Kothi Lane of Meerut, which supplies almost 90% of brass instruments to wedding bands in India, manufacturers are still stuck in time

Blame it on the GPS. Instead of directing us to a historical lane lined with shops selling musical instruments, it leads us to the Jali Kothi in Meerut where we are greeted by honking vehicles—from cycles to tractors—cries of vendors and mooing cows.

Machines, animals and humans share the road (almost harmoniously, like they do in most Indian cities) in front of the Kesar Ganj police station, which gets narrower with benches laid out in front of tea stalls doing brisk business on this sun-kissed October morning.

Technology might have failed us, but there is plenty of help on offer from passersby. After going around the winding lanes for a bit, we locate the right one between the tomb of Chhatri Wala Peer and the Delhi-Meerut road, about 70km from Delhi.

The Jali Kothi lane is crammed with shops which sell and repair brass instruments. There are tubas, euphoniums, trumpets and drums hanging outside the shops, all turned black over time, some dusty, peeling boxes of synthesizers. The high-pitch notes of a bugle, low-booming sound of a tuba and periodic clangs of a hammer coming from the nearby shops merge with the cacophony of peak-hour traffic to produce a peculiar melody.

There are about 50 shops on this 500m stretch and many more inside the by-lanes. Think of a common Muslim name and add the word “band" to it. And, they are all there: Yunus, Nasir, Nadeem, Rasheed. Hindu surnames are equally common: Gupta, Sehgal, Mehta, etc. There is a Rose Band, an A-One band and even an A to Z Band. Breaking the monotony of these shops are outlets selling band dresses and furniture.

Though there is no tangible data at hand, many believe that since Independence, 90% of India’s brass band instruments have been manufactured in this alley of Meerut, a small town in western Uttar Pradesh best known for the Sepoy Mutiny of 1857. People come here from all over the country to either buy brass instruments or get them repaired.

It all started in 1885 when Nadir Ali, a musician in the British army, and his cousin Imam Baksh decided to import brass instruments. They then started manufacturing these instruments in a factory at Kothi Atnas (in Jali Kothi lane) in the second decade of the 20th century. Over the decades, an entire industry has sprung up around Kothi Atnas.

Bhag Singh, 38, is smoking a bidi and blowing smoke rings while waiting for his euphonium to get fixed at Nadir Ali and Co. “The third button is getting locked with each press," says Singh, a slender man with a handlebar moustache, who has come all the way from Solan, Himachal Pradesh. “I had bought the instrument from here about 12 years ago and I don’t trust anyone else to fix it."

Amay Pagui has come from Goa to get two of his tubas repaired. As the two men negotiate and bargain with mechanics at Nadir Ali and Co., two other groups of men are seated at a bench in one corner, sipping tea and waiting for their turn, with their instruments bundled in a sack lying next to them on the floor. Sometimes, a whole day goes by waiting before skilled hands can examine a faulty instrument.

It takes about an hour to do a round of the workshop at Nadir Ali, which is spread over 4,000 sq. yards and employs close to 80 people. All work here, from cutting designs out of brass sheets to polishing and packing instruments for shipments, is done by hand. “We make everything in-house. Even the parts of the instruments and tools for work are made here," says Anurag Goel, the administration head who has been with the company for eight years.

The production floor is almost maze-like, with separate areas assigned for various works. Brass tubes are compressed for wind instruments in one section, in another, pistons parts are made, the tubes and the bell-shaped fronts are welded in yet another section, and so on.

The tools are rudimentary at best, the machines almost a century old and the processes, labour intensive. A simple trumpet, for example, is made of 170 parts, each of which goes through up to 17 processes before the instrument can be assembled. The entire process is a test of patience and precision.

The company makes a dozen types of such brass instruments.

Alam, 36, a short but strongly built man, picks a trumpet from the post-production assembly line for testing. After a few false notes and adjusting the mouthpiece a couple of times, he plays Aage Bhi Jaane Na Tu, the evergreen Sahir Ludhianvi song, composed by Ravi and sung by Asha Bhonsle in the 1965 movie Waqt. As the tune rises, it drowns out the other sounds in the vicinity, from the whir of the machines to the clanging of hammers.

The repaired instruments are numbered and kept in a storeroom. Some have been unclaimed for the last 20 years. “If someone comes to us someday with a receipt, we will give them the piece," says Alam.

Near the storeroom, there are boxes upon wooden boxes packed with new instruments with Ernakulam written on them. Another stack of boxes is destined for Indore.

“Apart from the wedding bands, we also sell to defence forces and Bollywood," says Faez Aftab, 46, the company’s director and Ali’s grandson. “We have exported our products to 150 countries, including Nepal, Sri Lanka, the UK, the Gulf region and Australia. Our products have been used in the best orchestras in the world, including the team of the legendary jazz artist Louis Armstrong," he claims. 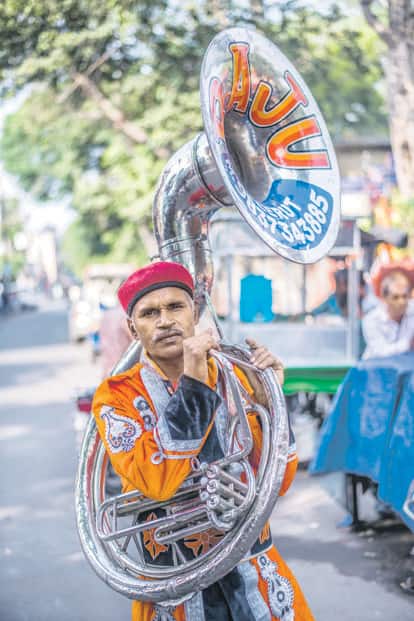 It seems the industry has been slow to change.

“When I joined eight years back, they used to make bills on the typewriter. Finally there are computers now," says Goel. There is no focus on e-commerce, although, Goel says, it is something the company is looking at for the next phase of growth.

There are other structural problems too. Mistry Ansar Ahmed, 63, who sits in his small repair shop across the road from Nadir Ali and Co. and has been repairing instruments for almost 50 years now, recalls the glory days with a smile.

“There was a time when there was no other work here," he recalls. “I also got into the business because I liked music and it gave me a high to be able to fix something that plays such good music.

“Now there is hardly any work. Whatever business we do, it is during the wedding season," he says.

Ahmed is not alone. Through the length of the lane, one can see shop owners waiting for the elusive customer.

“The advent of cheaper Chinese instruments and electronic synthesizers has hit the industry bad," says Aftab. “With synthesizers, people can play different sounds on one instrument."

There are also the issues of taxation, higher electricity tariffs and power cuts and rising raw material costs to deal with. And yet, the biggest problem, says Aftab, is finding skilled mechanics. The younger generation is aware of the pitfalls and many are choosing to stay away from the industry.

“It is a highly specialized industry. And unlike most other industries, there is not much work for people beyond this lane," he says. “Most of the shops that you see outside were opened by people who have worked here."

But despite these issues, “the truth is that we will survive and grow as an industry as a whole... Even with all the problems, demand outstrips supply right now," says Aftab. “It is the police and military bands that are majorly driving our growth."

“Aur dekho sir, shadiyan to hongi, na? Band to chahiye hi hoga. Thoda bahut upar-neeche to chalta hi rehta hai (There will always be weddings and they will require bands. Businesses keep fluctuating all the time)," Alam concludes as he picks another trumpet from the production line. He starts playing Ae Meri Zohrajabeen, another hit from Waqt. This time, the trumpet seems perfectly in tune.