The limited-edition Truss-Me Wallscape is a wall-mounted shelf made with split and lacquered bamboo gently bent around the edges, creating a beautiful angularity. In the same vein, the Truss-Me Clothes Stand, also made in lacquered bamboo, stands tall and slender like a modern-day totem pole. Both pieces have gold-plated brass and stainless-steel fittings.

Designed by Bengaluru-based designer Sandeep Sangaru, the two pieces belong to a series of furniture called Truss-Me that originated almost 14 years ago in the bamboo craft traditions of Tripura. The Truss-Me collection includes sofas, chairs, an uninterrupted bench system, stools, a floor-standing, tree-like shelf, a wall-mounted shelf and a clothes stand.

The last two of these pieces found place in auction house Christie’s latest catalogue. Among the modern masterpieces listed in the 154-page Design London catalogue that went to auction this week was a section on “Asian and Contemporary Design"—featuring objects from China, Japan, Vietnam and India. Sangaru’s Truss-Me Clothes Stand, among the 16 “unique and very limited edition pieces" on auction, sold for £3,000 (around Rs2.5 lakh) with premium.

The interest of Christie’s curators in Truss-Me lay in the continuity of craft tradition it embodies. “We offered Sangaru’s work last year at Shanghai, and this year decided to bring it to the West (London). Firstly, the materials he is working with were of great interest in the curation of the sale: bamboo and lacquer. And secondly, it integrates traditional skills but adapted to our modern world. Sangaru’s pieces fit into a house in Paris or a loft in New York or an apartment in China. It’s global and at the same time rich in the local history of India," Géraldine Lenain, international director at Christie’s, says on email.

The origin of these minimal bamboo forms goes back to 2002, when Sangaru first visited Agartala’s artisan workshops. Abounding in bamboo and cane forests, the North-East has historically used the material extensively, for everything from large structural constructions like bridges and houses to furniture, toys, tools and beautifully crafted musical instruments. Sangaru, who is an alumnus of the National Institute of Design (NID), Ahmedabad, and has intermittently been a faculty member there, went to Tripura as part of an NID team that was setting up the Bamboo and Cane Development Institute in Agartala. “What I realized was that their use of bamboo for their everyday lives was so evolved, yet the craft bazaars always saw the same archaic bamboo souvenirs," says Sangaru in a phone interview.

So Truss-Me began as an attempt to push the possibilities of the material, primarily its inherent tensile strength. It is an attempt to break bamboo out of its cast of a rudimentary material, the urban conception of which might be limited to the bamboo ladders used in construction. “That’s what I thought of bamboo before I went to Tripura," recalls Sangaru.

“By the time I returned from Tripura that year, I had conceptualized an essential triangular form I wanted to work with." NID’s Ahmedabad campus had a bamboo centre where artisans from Tripura were training and working. Sangaru began to work with Shishir Debbarma and Brajendra Debbarma, craftsmen at the centre, who refined the triangle form for Truss-Me. A string of young artisans from Tripura followed, working in Sangaru’s workshop to produce the collection.

The designer portrays a talent for simplicity and minimalism. The Truss-Me collection’s basic triangular form is structurally sound and aesthetically pleasing. Lightweight, fragile to look at but strong and sturdy, Sangaru employs the concept of a truss, a load-bearing frame used in construction, to create this line using split bamboo poles.

The journey from Tripura to Christie’s, however, has been a long tale of persistence. In 2007, Sangaru received a call from the Tripura Bamboo Mission to create a line of furniture for commercial production. That’s when Truss-Me was developed into a functional, saleable, commercially producible line of products. “The products were ready but the commercialization never happened. I was quite frustrated," recalls Sangaru.

Then, the Red Dot Design Awards happened. The seminal German design awards, a launch pad for emerging designers worldwide, recognized the genius of Truss-Me and awarded it the “Best of the best" in 2009. “After Red Dot, we were featured in magazines and people started reaching out for buying, showing in galleries, private homes, etc." Truss-Me was spotted by well-known Hong Kong-based designer and curator Freeman Lau, for the Beijing International Design Triennale in 2011, where it showed as part of a show called Rethinking Bamboo. That’s where Truss-Me found one of its most loyal patrons in entrepreneur and art collector Juan van Wassenhove. He is also managing partner of The Temple Hotel, a luxury hotel restored from an ancient temple and situated in the shadow of the Forbidden City. Pieces from Truss-Me can be seen at Temple Hotel. 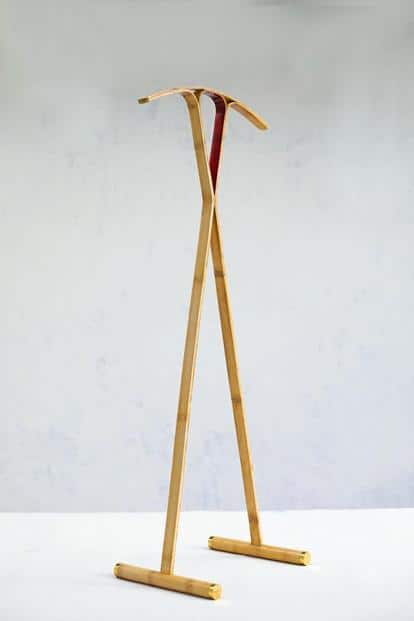 “Bamboo is very Asian. It is in plenty and the craft is still vibrant, but in China I could not find any design I really liked. In Taiwan, some designers are great but craftsmen are few, hence the price for good furniture is very high. I found Sandeep’s furniture to be like sculpture, yet practical. That is how our collaboration started," says Wassenhove on email. With Wassenhove’s encouragement, Sangaru decided to take Truss-Me a notch higher. He began to experiment with lacquering, finished it with gold and brass detailing, and set a strict standard for quality and craftsmanship.

“Showing Truss-Me at Christie’s helps us to gauge its monetary value," says Sangaru. Monetary as well as aspirational value; to share space with the best of modern design, to be part of a curated list that celebrates traditional craft legacies while looking to the future.

The journey of Truss-Me reveals the possibilities for Indian craft and design going forward.