Nayantara Sahgal on writing political fiction, and her latest story about a dystopian Indian society

In 1985, Nayantara Sahgal wrote Rich Like Us, a political novel set against the backdrop of the Emergency. It won the Sahitya Akademi award, which she returned a couple of years ago in protest against the institution’s silence on the murders of writers and rationalists M.M. Kalburgi, Narendra Dabholkar and Govind Pansare. She’s now written a novella, When The Moon Shined By Day, a story about a dystopian Indian society. It’s a place where Muslims have been ghettoized, and eventually their quarters burned down with them in it, where cow carcasses are used as a method of protest, where censorship of art and books is rampant.

In an interview, Sahgal speaks of the writing of the novella. Edited excerpts:

The main thrust of the novella is about the importance of the arts in depicting reality, not just the victor’s version. Was that why you felt the need to write this book?

I think all writers write about things they feel strongly about. All my fiction has a political background. That is my natural material. The most obvious among them would be Rich Like Us, which had the Emergency as a background. This was a continuation of the same thing... bringing to life how people feel in the times we are living in now.

This story recalls recent events—the ghettoization of Muslims, Dalits refusing to pick up carcasses, the banning of books and art...

Which is an old story, it didn’t start now. These bans always worry writers and artists. I feel, in a free society, which we are, these things should be open and, as many of us have said so many times, if you don’t like a a play, don’t see it. If you don’t like the subject of a book, don’t read it. Don’t ban it. The subject hit me rather hard a number of years ago when I was invited to take part in a seminar in Bombay about banning. Next to me on the panel sat a Shiv Sena member of Parliament. My turn came first and I said banning is wrong and so on. When it was his turn, he said, she is quite wrong when she says we would like to ban books—why should we ban books when we can burn them? This was the remark of an MP, which really shook me.

Did you hope to influence opinions through the writing of the book?

In non-fiction, yes, they wish to influence you with a point of view. It’s not the case with fiction. A novel is a story, an invention that comes out of your imagination. And that’s all it is. If it makes a reader laugh, or cry, or it starts a thought process, then it’s a good story. But one has no desire or idea about influencing people. A novel is a work of imagination, and it is written because one feels strongly about this, and—as you were talking about the survival of art—you want it to survive. That 10 years hence or 100 years hence it will be on the shelf for people to read. 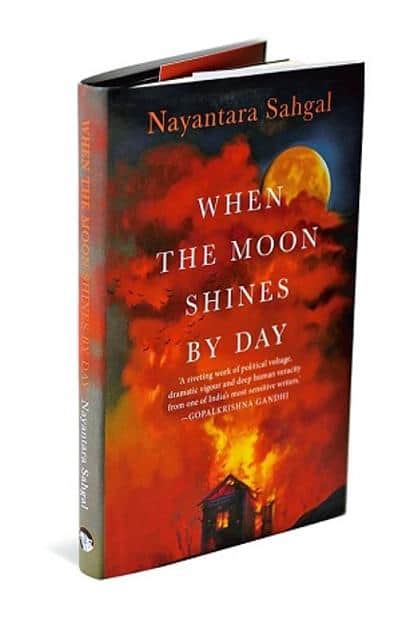 Nayantara Sahgal, When The Moon Shines By Day, Dystopian, Novella, Rich Like Us, Books

There’s a point made in the book about the subjugation of women.

There are two sides to this. One side is these four friends, it’s a very loving sisterhood who are entirely unsubjugated. In fact, I’ve said that Rehana feels that one of the things that binds them is that they never self-efface. The other women in the story: As happened in Nazi Germany, where an attempt was made to produce more Aryans who would be the future masters of the human race, in my book too Hindu women are being urged—and this part is true, that there was such a call from some swami—to have at least five children. That’s what started this in my mind that you’ve got a movement going on where patriotic women must have at least five children. So I’ve made fun of that in a way that this lady, Mrs Ashwin, she wants to make pregnancy fashionable.

Was the use of satire deliberate?

It’s not a decision I made. When you start writing, the writing controls itself. The great American writer William Faulkner once said that he had a hard time running after his characters, keeping up with them. Once he put them on the page, they were themselves, they were not his instruments anymore.

There is a sense of hope in your novel.

No. This novel ends with a sense of foreboding on the part of the German character. Again, he does not think that it can pass so soon. His Indian friends are rejoicing because they think the battle’s won. But he’s filled with foreboding because he thinks he knows better. These Indians have been brought up in freedom, what do they know about what can happen?

If you are asking me if I feel a sense of despair, no, what I do feel that there is a battle to be fought in the short run, but that in the long run, in my view, things must change because we have been brought up in freedom. We are fortunate in the whole of Asia that from the day of independence, our Constitution gave us the right to the kind of life we wanted to live, to freedom of expression, freedom of worship, freedom of religion, and at independence again, though we are a country of deeply religious people, of different religions, and we all worship differently, and yet we chose to be a secular country, with an agnostic prime minister. So how can one despair of us? We have great civilizational strength because our civilization has nourished debate and disagreement from ancient times. What ‘Indian’ means to the whole world, not only to India, is that here is the only society in the world where plural society has prospered and enriched this civilization. So I would be betraying everything that my parents fought for and this country fought for if I were to despair. But yes, in the short run, to prevent despair, we have to speak up, which not only writers, all sections of society are doing: historians, scientists, civil servants, Dalits, maybe most strongly, who have taken a huge step by saying we will not remove the carcasses of cows.

It’s been two years since writers, including you, came together over the murders of three writers. There’s been no progress in those cases still.

It’s not just writers, there’s Mohammad Akhlaq, Pehlu Khan. The worse thing is, you can’t bring back the dead, but at least punish the guilty. Pehlu Khan’s accused have been let free, and his family called the guilty party. It’s an insane twist to justice, and makes one fear for the judicial system.

The novella uses the example of Picasso’s ‘Guernica’ to state how art can reveal the truth. Which other books or arts had such a deep influence on you?

I saw this painting when I was 16 years old. I’d just gone to America to join college, friends had taken me to the Museum of Modern Art (Moma) in New York. The horrific bombing of a small town in Spain. That was in my consciousness from my youth. That’s what I say in my book as well, that authoritarian regimes are afraid of art because art survives. It revives and recollects things and recreates them after the events. Things which are written at the time get wiped out through censorship. But art never deals with the immediate, it's universal—so there was Guernica. And, of course, I had a very political childhood and my family was very involved—the dreadful things that were happening in Europe, all that is part of my growing up. Much later I read this famous novel by Ernest Hemingway called For Whom The Bell Tolls about the Spanish civil war, which had a huge effect on me.

Are you working on something new?

The beginnings of something, fiction. That’s my first love. I have written a lot of political commentary. All that came out of conscience that it has to be done. But fiction comes out of love.