At the “hot gates” of Thermopylae in Greece

On the way there—the place I’ve been on my way to most of my life—we stop at the serene Bralo British Military Cemetery. There are several dozen graves of British soldiers who were stationed there during World War I. But there’s a surprise in store as we wander about the lush lawn. For many of the soldiers buried here died after November 1918, after the end of that great war. Turns out there was an influenza epidemic, and it got these men—no doubt ecstatic at war’s end—before they could return home. How sad to survive a long, brutal war only to succumb to the flu.

Less than an hour later, we are there. Three hundred soldiers from a different, brutal war were slaughtered at this spot, though if there ever were any graves, there are none left now. They had held firm for three days, repelling wave after enemy wave. Some say the enemy army was a hundred thousand strong, some say nearly two million. Whatever the count, these 300 and some allies from other Greek city-states held them at bay and might have done so indefinitely, the lay of the land being their real weapon. For, in those days, there was a narrow pass here, sandwiched between mountain and sea. The defenders stationed themselves where it was narrowest, and then “wave after enemy wave" really meant little, because the enemy could only come at the defenders in a trickle, a few at a time.

Nearly 2,500 years have passed. In that time, at Thermopylae (“hot gates"—a reference both to the pass and the nearby hot springs) in central Greece, the seashore has moved substantially north and east. You have to struggle to imagine a narrow pass in this flat expanse surrounded by hills, the trucks growling past on the nearby Athens-Lamia expressway. What is here instead is a monument to the heroes of those bloody few days in 480 BC. Wearing nothing but a helmet and a shield on his left arm, spear held high to throw in his right fist, King Leonidas of Sparta towers above the dozens who spill from a tour bus and advance on him like so many Persians, their smartphones held high to click. 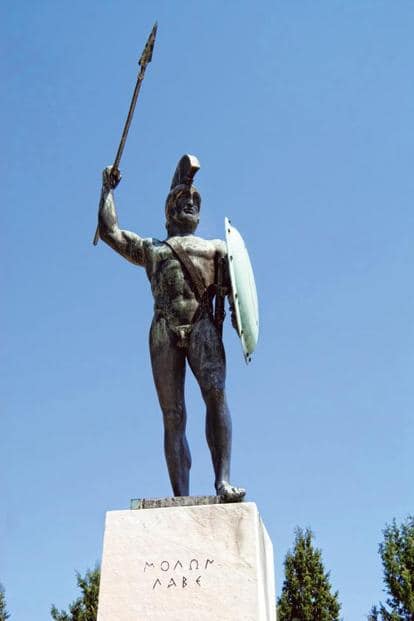 A statue of Leonidas.

I have wanted to visit for years. I must first have read about Leonidas in some children’s book of stories from antiquity. Later, there was Steven Pressfield’s stirring recounting of the tale in his vivid novel Gates Of Fire; William Golding’s finely crafted essay, The Hot Gates, about visiting this spot himself; the graphic film 300; and plenty more. It’s hard to imagine that pass today, yes. But as I look up at him and my mind leafs again through so many pages from years gone by, I remember how captivated I was by the cheerful, almost nonchalant heroism Leonidas wore so lightly. Like: When told that the Persian army had so many archers that their arrows would blot out the sun, he remarked, “Good, then we can fight in the shade" (archaeologists have found hundreds of Persian arrowheads here). Like: He and his Spartan warriors prepared for battle, and death, by combing their long hair and playing games. Like: When the Persians called to Leonidas to surrender his arms, he shouted back, “Molon Labe (Come and get them)!", a famous taunt that is today inscribed on the pedestal on which he stands.

As a child fascinated by tales of war, I couldn’t get enough of this one. Why did it take me so long to get there?

The Greeks might have held the pass indefinitely. But after two days of fierce fighting, a traitor named Ephialtes led a detachment of Persians along a trail that wound through the hills to the south, trekking through the night to arrive, as dawn broke, behind the defenders. Now the narrowness of the pass was no longer a Greek weapon. Knowing they were betrayed, Leonidas sent his allies home. He and 300 elite Spartan soldiers remained, aware that they would die. But they fought nevertheless. After they lost their spears and swords, they fought on with fists and feet and teeth and a wild, indomitable determination—until every last one lay dead.

Over time, Ephialtes came to mean “nightmare" in Greek, used in the language like “Quisling" or “Judas" are in English. To one side of the monument, a woman stood in the shade of a large sign that explained the ebb and flow of the battle. With my Greek restricted to parakalo and efcharistó (“please" and “thank you"), it was hard to ask her to say something using “Ephialtes", though I tried. “Ah!" she exclaimed finally, and sold me a bottle of thick, lip-smacking honey.

A present-day view of the Thermopylae Pass.

The Persians won at Thermopylae. But news of the valour of Leonidas and his 300 swiftly reached the forever fractious Greek states. It was the inspiration they needed—and I think in his last moments, as he tore with bloodied fingers at still another Persian, Leonidas must have known it—to unite against the invading menace. Later that year, the Greeks won a famous victory over the Persians at the Battle of Salamis. Xerxes, king of Persia and now general of a shattered army, limped back to his country in ignominy.

The lesson from Leonidas runs like a silver thread through every valiant act of resistance against oppressors and invaders in the centuries since—Nelson, Saladin, Shivaji, Masada; through the great non-violent movements that Mahatma Gandhi, Martin Luther King and Nelson Mandela led; through the men and women who threw off the shackles of the Soviet Union and its vassal states; through the pent-up yearning that found expression in the Arab Spring. Not all of these ended well. Some dissolved into more tyranny or civil war. Yet that’s the lesson from Leonidas: The point is the stand itself, not what may come in its wake.

And “Ephialtes" is not the only linguistic legacy of Thermopylae. “Molon Labe" lives on too. It’s inscribed not just on Leonidas’ pedestal, but also on a thousand tourist trinkets sold everywhere from the Acropolis in Athens to Knossos in Crete. In Leonidas’ hometown of Sparta, another statue of him—he wears armour, sandals and carries a short sword—has the words on its pedestal. But only a few dozen feet away, we found a display of olive oil branded that way, the logo a stylized helmet.

T-shirts and oil, key rings and caps—mundane stuff, maybe? But maybe that very ordinariness now measures what these men did, how it has become part of a certain essence of being Greek.

Part of me, too. I went a long way to see you, Leonidas. Finally, I can go home