The efforts of the Naandi Foundation and Mahindra's Hariyali project have reforested the Araku Valley, creating new means of livelihood

About two decades ago, Araku Valley in Andhra Pradesh was unfamiliar to the rest of the country. Its rich biodiversity and natural beauty were undercut by its remoteness and inaccessibility. Gripped by Naxalite insurgency and crippled by poverty and underdevelopment, Araku Valley presented vast possibilities for a social management project.

There was just one arterial motorable road through this entire tribal region. Non-governmental organizations (NGOs) in the area and government reach was limited. That is exactly why the Naandi Foundation chose to start its work here in 2000. “We were told that this was one of the least developed parts of India and if we really wanted to achieve something, we should change Araku. If an integrated development template worked here, it would mean that we could probably sort out problems elsewhere," says Manoj Kumar, chief executive officer of the Hyderabad-based foundation.

When Naandi entered the area, says Kumar, they discovered that the problems were manifold. There were high rates of maternal and child mortality, a lack of schools, and no proper healthcare. The tribals grew millets, following the slash-and-burn method of agriculture. The first few years were spent preparing the ground for projects. Apart from creating livelihoods for farmers, Naandi Foundation’s work in Araku spans the areas of healthcare, nutrition and education.

Bit by bit, as the forests were denuded, the Adivasis’ traditional way of life also came under threat.

The biggest challenge was to preserve the tribal communities’ traditional connection with the land. “So the question for us was whether we should give these Adivasis whole new skill sets and help them become something completely different, like business process outsourcing executives, or should we enhance their existing skills and turn them into ecology warriors?" As Naandi opted for the second and more difficult option, it was clear that the only way to do this was by recreating the forest that had been lost.

And that was where Mahindra & Mahindra Ltd entered the picture in 2010 with its Hariyali initiative. Under the initiative, launched in 2007, the company had pledged to plant one million trees a year. “We soon realized that we were running out of land and that we were not creating any livelihoods. So we thought the time had come for social forestry projects, where, in addition to plantation, there would also be the potential for creating livelihoods," says Rajeev Dubey, group president (HR and corporate services), CEO (after-market sector) and member of the group executive board, Mahindra & Mahindra. According to Manoj Kumar, also a corporate social responsibility adviser for Mahindra, “There was no better template to experiment than in this valley, where people were living on the margins." 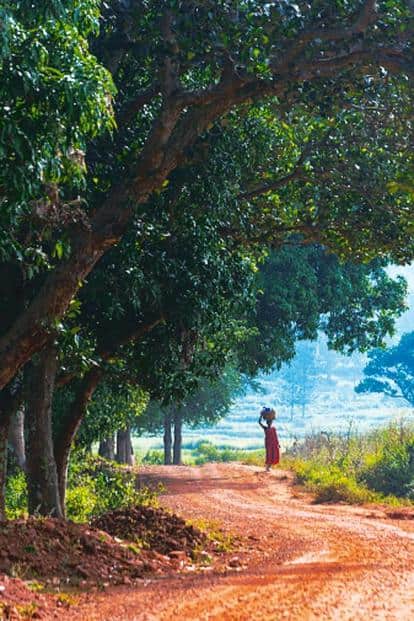 Araku’s many trees share a symbiotic relationship with its coffee shrubs. Paddy Photography

In Araku, however, they knew they would have to design a forest that could grow quickly. And that is how Naandi Foundation and Mahindra & Mahindra came up with the idea of a “functional forest" which would be as diverse as it would be beneficial. They decided to use the coffee plants that had been introduced by the British in the 19th century as the primary building blocks for their work. They planted varietals as shade and boundary trees for these coffee shrubs, creating a symbiotic system. Fruit trees, for example, would provide shade to the coffee, and support the pepper vines that clung to them.

Under the guidance of Naandi Foundation’s David Hogg, an agriculture and biodynamics expert from New Zealand who lives and works in Araku Valley, a new forest was designed. The aim was to plant more than 10 million trees. Additional support came in from Danone and other European companies.

When Hogg first came in, he was appalled to see that there were no birds or bees—a pointer to the poor health of the forest.

Today, Araku Valley’s forests feature trees like teak and about 16-18 varieties of fruit trees, including the popular Banganapalli variety of mango. The trees had to be nurtured and a training programme had to be designed to ensure their survival. “This was entirely new for the Adivasis, because there was no concept of pruning the trees in the natural forest," says Hogg.

Today, cash crops like coffee and pepper and fruit trees provide nutritional security. The large harvest of mangoes and other fruits may indicate the future income-generating potential for the local communities.

Araku Coffee is a tale in itself. The brand, which is owned by the Araku farmers’ cooperative, is promoted by people like Infosys co-founder Kris Gopalakrishnan and Mahindra group chairman and managing director Anand Mahindra. Araku Coffee, grown according to the best biodynamic practices, is entirely organic. And it has recently opened its first retail store in Paris.

The journey hasn’t been easy. “While our coffee is made from the best handpicked (coffee) cherries, we could never cherry-pick our farmers. Our job was to transform forest dwellers and fruit gatherers to gourmet coffee farmers," says Kumar.

The numbers tell the story. As of 31 March, the Hariyali initiative had planted more than 7.5 million trees in the Araku Valley. The project has reached out to 100,000 people across 350 villages. Nearly 15,000 acres have been revitalized and 14,750 farmers have benefited.

“One of the most beautiful things for us is that the birds and bees are back; and every tree is planted on Adivasi land and protected by the Adivasis themselves," says Kumar.