Antariksha Sanchar takes you on a flight of mythological fantasy

Based on an upcoming video game, 'Antariksha Sanchar' is a sci-fi Bharatnatyam opera that celebrates South India's cultural heritage

A troupe of dancers led by Bharatanatyam exponent Jayalakshmi Eshwar stomp and swirl across the stage of the Royal Opera House in Mumbai, simulating the mechanics of flight. Their feet tap out the rhythm of the music being played by a collective of musicians on both sides of the stage, mixing traditional Carnatic music with expansive electronic soundscapes and space-age special effects. In the backdrop, an animated sequence depicts a uniquely Tamil dream world, featuring temples, devis and steampunk contraptions. The experience borders on sensory overload, often threatening to overwhelm the viewer with its disparate strands of dance, music and visual arts. But when it all comes together, you’re treated to an engaging, immersive storytelling experience that blends history, mythology and modern technology in new and exciting ways.

Antariksha Sanchar: Transmissions In Space, a 90-minute-long sci-fi, fantasy Bharatanatyam dance opera, premiered on 22 November. Presented by Red Bull Music, it was conceptualized and executed by Eshwar, Quicksand Gameslabs and audio-visual collective BLOT! co-founder Avinash Kumar (who goes by the moniker Thiruda), and electronica producer M.S.R. Murthy (who performs as Murthovic). The latest iteration of an ongoing transmedia cultural project, the opera employs traditional and modern art forms to tell the fictionalized story of mathematician Srinivasa Ramanujan, whose dreams lead him to build and fly a mythical vimana (flying vehicle) to explore the cosmos.

The origins of the project lie in Eshwar’s 2010 original Bharatanatyam production—also called Antariksha Sanchar—which took inspiration from Tamil sangam literature and Sanskrit epics, as well as the controversial 20th century text Vaimanika Shastra to depict different mythical modes of flight. At around the same time, Quicksand Gameslab studio received a cultural grant from the British Council to explore the possibility of an experimental video game. “I thought this was a great direction to go in and that it could potentially make for a very great video game," says Kumar. “We took that idea and created a more straightforward hero’s journey with Ramanujan as the protagonist."

Kumar and his studio have spent the past few years working on creating Antariksha Sanchar as a uniquely Indian fantasy adventure game. A 2016 PC demo did the rounds of international festivals, including the Sheffield Doc Fest and the IndieCade Festival in Los Angeles, garnering positive feedback. But Kumar always envisioned the game as one part of a larger transmedia project. So when Red Bull Music approached him and Murthy—who was already working on sound design for the game—to put together a live performance based on the concept, they jumped at the chance.

The team spent the past year-and-a-half adapting the video game story for the opera. With the dance troupe based in Delhi, Murthy and the ensemble he put together in Hyderabad, and Kumar’s studio in Goa, the logistical hurdles were immense. Time to work and practise together was limited, and it showed at times during the performance, when the different elements didn’t come together as well as they should have. But the bigger challenge was in trying to take three distinct art forms—with their own traditions and limitations—and integrate them. Kumar credits his mother, who comes from the traditionalist Kalakshetra school of Bharatanatyam, for taking the lead and pushing him and Murthy to be more ambitious despite their concerns about how classical purists would react.

“Generally we stick to the same footwork but, here, to suit the music and the theme I explored the possibility of different types of movements to go with the music," says Eshwar. “But it still exists within the classical. I always tell my students that the grammar of classical dance is like a big ocean. You can swim and go from one side or the other, or you can keep swimming in a circle. It depends on the creativity of the dancer." 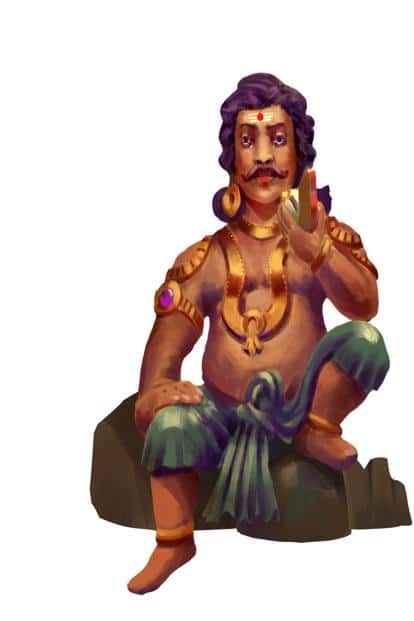 one of the characters from the video game.Photo courtesy: Red Bull Music

The team is currently preparing for their 5 December performance in Delhi, but Kumar and the rest have major plans for Antariksha Sanchar in the near future. Apart from the game, which is scheduled to launch sometime next year, they are also working on a graphic novel and merchandise such as tote bags, apparel and toys. There will also be vinyl LPs of the music created by the Antariksha Sanchar Ensemble, followed by another with remixes by eight artists. Other plans include a podcast series, as well as more elaborate stagings of the production early next year.

“People think the classical arts are dying because of modern thinking and Western music, but this production shows that even with all these different ingredients, our culture still connects us," says Eshwar. “This is just the beginning. I hope it gives ideas to other creative people that we can combine our classical culture with modern technology and electronic music."

Antariksha Sanchar will be staged at the Kamani Auditorium in Delhi on 5 December.