The remarkable science fiction universe of Ursula K. Le Guin gets a reboot with a new boxed set

In a career spanning over 50 years, the grand dame of science fiction and fantasy, Ursula K. Le Guin, has never been one for grand space operas. Her importance to the genre, in stories spilling over with mould-breaking ideas and lyrical prose, has been in minute world-building. As she says in her introduction to the new boxed set, “The Universe in the 1960s was a man’s world—a remarkably chaste one…some anthropological sophistication was beginning to slip into descriptions of alien society, but domestic customs, kinship, child-rearing, etc. was nowhere. Science fiction was still essentially an adventure-story genre, even if an intellectual one. We followed the boys out among the stars." As one can tell, after reading the vast body of science fiction that makes up The Hainish Novels & Stories anthology, so did Le Guin, but to vastly different ends.

What is the Hainish universe? Some have called it a cycle, even a saga, but Le Guin scoffs at such notions. The basic premise underlying each of these stories is this—Earth (called Terra) and over 80 other planets populated by human beings are part of a confederacy of worlds called the Ekumen. Think of it as a galactic UN, led by the planet Hain, the planet where, many ages in the past, human beings first originated. Over millennia, as the people of Hain developed space travel, they seeded various other planets, including Earth, with humans. And then Hain, due to a civilizational and technological decline, forgot about these worlds. Over thousands of years, shaped by the unique circumstances found on each of these planets, human beings evolved in different ways, ignorant of, and alien to, their interplanetary cousins. Sometime in Earth’s future, emissaries from Hain reappeared, setting the stage for the League of All Worlds, also known as the Ekumen.

While this is the basic framework, the books and stories themselves are not interconnected, as, say, the Foundation books of Isaac Asimov. To quote Le Guin, “Any timeline for the books of the Hainish descent would resemble the web of a spider on LSD. Some stories connect, some contradict."

Le Guin’s Hainish novels are, of course, the best known. These include two bona-fide classics—The Left Hand Of Darkness (1969) and The Dispossessed (1974). Both won the Hugo and Nebula awards at the time, and both jolted science fiction in heretofore uncharted territories. The radical proposition of The Left Hand Of Darkness was to imagine a planet peopled by humans who have no fixed gender, except once every month when they enter “kemmer", a hyper-sexual phase when the latent possibility of gender is manifest as either male or female. “In the 1960s, we started talking about gender," Le Guin said in 2013 on Opb.org, “What is it? Is it completely physiological? How much of it was socially constructed? Now, that language didn’t exist when I wrote the book…it was a thought experiment."

A similar thought experiment was The Dispossessed, set on the neighbouring planets of Anarres and Urras. In it, Le Guin set out to explore what an anarchist utopia would look like. In a society based on the concept of cooperation and reciprocity between free individuals and not on the capitalist idea of competition,where does individual human ambition fit in, Le Guin seems to ask. The novel also charted the creation of the “ansible", a device of instantaneous communication that transcends time and space—a key cornerstone of the intergalactic society of the Ekumen.

Le Guin’s glittering imagination never ceases to hold up mirrors to our own world. In The Word For World Is Forest, a 1972 novella that inspired the movie Avatar, a native of the forested world of Athshe defends his pacifist society against a rapacious Terran colony that’s threatening an ecological catastrophe. The action is vivid and uplifting, but Le Guin has another question—how does the adoption of war change a planetary culture?

The several short stories in the Hainish world are no less fascinating. The 1971 story Vaster Than Empires And More Slow, explores a sentient planet of trees; The Matter Of Seggri investigates a planet where men are few and are kept as trophies; the cycle of short stories, Five Ways To Forgiveness, explores the ongoing ethical and political struggles between a planet of slave owners and its neighbouring planet, controlled by freed slaves.

It’s instructive to think that modern science fiction writers, from Neil Gaiman and David Mitchell to N.K. Jemisin and Liu Cixin, are grappling with issues that Le Guin put front and centre in her stories. No wonder they’re fans. As this anthology makes very clear, she has always shown the way. 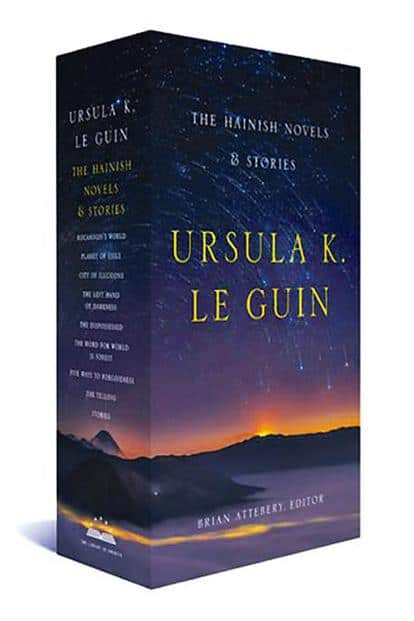