Alain Passard gets a taste of Chandni Chowk

The legendary rôtisseur and owner of the three Michelin-star Parisian restaurant L’Arpège, Alain Passard, was celebrated for his delectably tender slow-cooked meats for over three decades. Then, in 2001, he made the revolutionary decision to take red meat off his menu, and put vegetables centre stage, designing plates that enabled them to truly shine. Today, he spends as much time farming as he does cooking; he also plays the saxophone. Lounge caught up with the chef on a Saturday morning as he took a rickshaw ride through the chaotic alleys of Old Delhi’s Chandni Chowk to the famous Paranthe Wali Gali. Edited excerpts:

How many times have you visited India and what keeps bringing you here?

I think the first time I was here was in 2006. I remember reading a lot about India, that’s what really piqued my interest. At L’Arpège, we would have a lot of Indian diners who would speak very highly of the rich diversity of people and food. I would end up incorporating a lot of Indian flavours into my menu, things I’ve read about, tried in my kitchen or eaten at restaurants. But I did not know if those flavours were authentic. I guess my first time to India was in a way to seek truth, the truth about Indian flavours. I’ve been to India five times, but it’s my first time to Old Delhi, and it seems like an adventure. 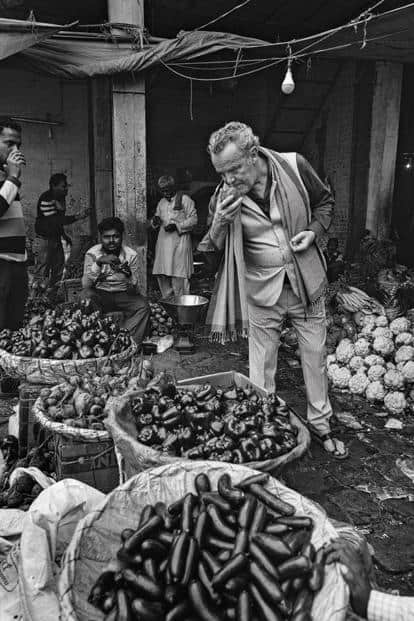 Passard gets the feel of the seasonal local produce in the ‘mandis’ of Old Delhi. Photo: Rohit Chawla

Were you afraid of making the shift from cooking with meat to a predominantly vegetable-based menu?

On the contrary, there was no fear. When you venture into this kind of adventure, you should never be afraid; in fact, I was happy. No doubt, it was a gamble, leaving everything that you know and going into an unknown adventure. I made this change because meats had given me what they had to. To put it simply, I reached the last page of the book and decided to start a new one. I remember, though, most people working with me got scared and all of them practically left, but I was quite excited and determined.

He tries his hand at rolling out a ‘paratha’ in Paranthe Wali Gali. Photo: Rohit Chawla

Is there anyone else’s cooking that you particularly look forward to?

No one ever wants to cook for me. I don’t know why. But personally, I love a lot of people’s food; that made me realize, do you really need to know the person who is cooking for you? I feel through a person’s food you get to know a lot about them. Sometimes I am touched, sometimes almost humbled by it. Like I don’t know you, but I would love to taste your food.

You like jazz music, and the genre is all about not knowing where it will take you. Is it the same with your food?

The chef on a cycle rickshaw, often considered the best way to negotiate the narrow streets of Chandni Chowk. Photo: Rohit Chawla

Yes, it is completely the same thing. My cuisine is about giving my hands the freedom of improvisation, working without recipes, like how musicians let it flow without always reading the music notes. I think it is this freedom that enables me to do something constantly different with the produce. Like how musicians hold their instruments, decipher the mood, the texture of vegetables mimics the same thing, coming together to create beautiful notes and a symphony of flavours.

How do you feel about the Americanization of food and eating habits?

For me, feeling the soil, treating the produce with utmost respect, is paramount. It helps me understand flavours better, grounds me in a way. Even the process of going to the market and picking things yourself, inspires you and is a beautiful thing that must be preserved.

No trip to Old Delhi is complete without trying some of its legendary food. Photo: Rohit Chawla

Do you experiment with unusual flavours that are traditionally never combined?

In that sense, no one was ever interested in vegetables, at least from a culinary point of view. The higher echelons of haute cuisine were focused solely on meat or non-vegetarian food. For me, taking something that was traditionally never mixed with fine dining was vegetables. So I guess that combination did yield in something beautiful and gave vegetarian food its unique place in global cuisine, so it is a bit historic.

Most women cook at home on a daily basis, why hasn’t this translated to professional kitchens?

It is unfortunate but it is getting a lot better. From the time (when) I started working, there are a lot more women in professional kitchens. Encouraging women to join culinary school really helps.

What ingredient has fallen out of favour?

What would you recommend as break-up food?

Who do you like to feed the most in this world?

Anyone who loves eating food. Saying that, I really like to cook for my mentors, the ones who taught me how to cook.

Do your children often ask you to cook for them?

Oh! That’s what they do. All the time. All four of them!

Apart from French food, what food has touched your soul?

Indian cuisine, it is so powerful, robust and dynamic in flavours. I am immensely inspired by it.

Have you ever mentored any Indian chef?

No! But I hope after this interview I inspire some to work with me.