Mughal, Maratha, Jain, Britishit is this mix of architectural influences that made the Walled City of Ahmedabad the first Indian city to be declared a World Heritage City by Unesco, all the more highlighted in contrast to the city's modernist landmarks

Ahmedabad was in the news recently when Prime Minister Narendra Modi and Japanese premier Shinzō Abe laid the foundation of the Ahmedabad-Mumbai high-speed rail project.

Prior to that in July, Ahmedabad’s Walled City became India’s first Unesco World Heritage City. Spread over 5.43 sq. km, it has a population of around 400,000. Of the 287 World Heritage cities worldwide, Bhaktapur in Nepal and Galle in Sri Lanka are the other two cities in the subcontinent which are on the list. The certificate was handed over on 1 September.

In June, Ahmedabad’s nomination had been deferred by a year due to incomplete documentation. However, at the final meeting on 8 July in Krakow, Poland, after seeing India’s presentation, 20 member countries, including Turkey, Lebanon, Tunisia, Portugal, Peru, Croatia, Zimbabwe, Tanzania, South Korea, Croatia, Cuba and Poland, supported the nomination.

“The journey began in 2010 when Prime Minister Narendra Modi (then Gujarat chief minister) proffered the dossier of Ahmedabad to Unesco," said Ruchira Kamboj, the then permanent representative of India to Unesco, in her speech after Ahmedabad’s inscription in June. The first such attempt for a world heritage tag was made in 1984 when the study for conserving Ahmedabad’s heritage structures was instituted by the grants agency Ford Foundation.

Sabarmati Ashram: Mohandas K. Gandhi, who lived here from 1915-30, set up this ashram around his principles of simple living. It served as the headquarters from which he organized the independence struggle. In 1963, a museum was added, designed by the late architect Charles Correa. The Gandhi Ashram is in Sabarmati, which is outside the Walled City.

One of the reasons for the selection was the continuity of the city’s heritage and culture, as well as Ahmedabad’s association with Mahatma Gandhi. This “unbroken history", as Kamboj put it, is reflected in the daily diya (lamp) and shehnai ceremonies at Teen Darwaja (among the 13 darwajas or gates of the Walled City), or in the aspect of community living in about 600 pols (centuries-old housing clusters in the area, that have withstood even the massive 2001 earthquake).The pols, with their extensive wood carvings and vernacular architecture, stood out in the selection.

Sidi Saiyyed Mosque: The main feature of this 16th century mosque is its intricate jaalis (latticework). Cited as one of the country’s finest sculpted works, it has inspired the logo of the Indian Institute of Management, Ahmedabad.

Monuments such as the Bhadra Fort, Jama Masjid, Jhulta Minara (Shaking Minarets), Sidi Saiyyed Jali, Dutch tombs, and Hutheesing Jain temple, among others, are part of the Walled City’s heritage, of which many are Archaeological Survey of India-protected structures. A seamless blend of the old and the contemporary is visible in Ahmedabad: for instance, the century-old Ellis Bridge over the Sabarmati river connecting the eastern and western parts of the city co-exists with the modern-day Sabarmati Riverfront.

Sanskar Kendra: Housing the Ahmedabad City Museum, it was built in the mid-1950s. It was designed by Swiss-French modernist Le Corbusier in his signature style of an exposed brick box, lifted on columns, and a winding ramp leading up to the interiors. The Kendra is situated outside the Walled City.

Ahmedabad is also home to modern architectures, including the Indian Institute of Management (by Louis Kahn), Sanskar Kendra (Le Corbusier) and the Gandhi Museum at Sabarmati Ashram (Charles Correa).

“I believe there are three main factors that lend uniqueness to the city. Its architecture, its settlement planning and continued culture," says Jigna Desai, associate professor and area chair for conservation, CEPT University, who has been associated with CEPT professor Rabindra Vasavada and his team that compiled the dossier for the Walled City.

In the 18th century, French traveller Taverniere visited Ahmedabad and described it as “the headquarters of manufacturing, the greatest city in India, nothing inferior to Venice for rich silk and gold stuffs curiously wrought with birds and flowers." 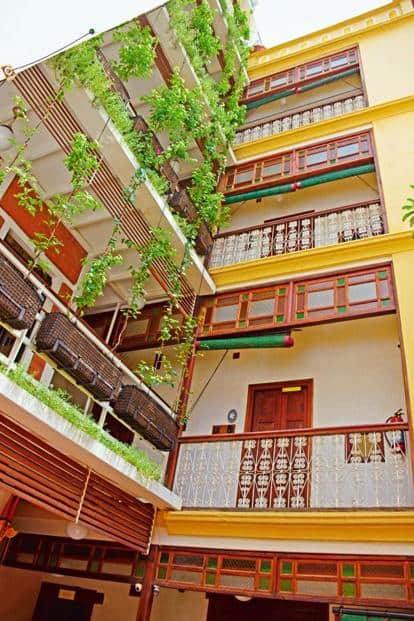 Mangaldas Ni Haveli: Over two centuries old, the haveli is representative of a traditional Gujarati house, with a central courtyard which opens to the sky.

In the havelis, chabutaras (feeding place for birds), mosques, step wells, chowks, markets, temples and buildings one can see a mix of influences of those who ruled/lived in the city at various times—Mughals, Marathas, Jains and the British. “Unlike other Indian cities, including Varanasi, it (Ahmedabad) has never been demolished by invaders or rulers. The local people, especially the Jains and Nagarseths, always managed to negotiate and convince outsiders not to cause destruction to the city or its buildings," says Debashish Nayak, director, Centre for Heritage Management, Ahmedabad University. Chabutras: The traditional structures to feed birds dot the Walled City. Many of these date back to Ahmed Shah’s reign in the 15th century. They reflect a rich synthesis of Hindu, Jain and Islamic architecture.

The Ahmedabad municipal corporation (AMC), in its efforts to conserve the Walled City, restricts construction of high-rise commercial buildings there. The AMC’s heritage cell, that was set up in 1996, has chalked out a 20-year scheme, which includes restoration, heritage walks and policy change.

The inscription in itself does not mean a default financial assistance. However, a Unesco World Heritage City is likely to attract more funds from avenues that invest in conservation and conservation-based development.