Antibalas have the unique ability to make spirited danceable music with a high quotient of funk, infusing it at the same time with lyrics that are unabashedly political

In the late 1960s, Nigerian musician Fela Kuti created the musical genre that is known as Afrobeat. It is not an easy genre to define, chiefly because its constituents include a range of disparate styles. At its core is the “beat", a West African rhythm manifested in the prominent drum and bass lines, but layered over that are complex constructs of musical influences that include a cornucopia of genres: funk, soul and R&B; 1970s’ psychedelia-inflected rock; American jazz; African folk style call and response vocal patterns; and Ghanaian highlife, a style where Western instruments are employed to play traditional music.

Kuti’s bands were huge, his live shows spectacular and rambunctious, and his lifestyle controversial. A key part of his music—live or recorded—was his politics. Kuti was a passionate critic of the regimes in Africa, particularly in his homeland, Nigeria, and his lyrics frequently took a stance against governments, corruption, coercion, and the adversities resulting from colonialism.

Kuti died in 1997, aged 58, and his eventful life—marked by controversies such as his very public practice of polygamy, arrests, and incarceration—was at once colourful and influential. In Nigeria, as well as in many other parts of the world, he is still revered as a superstar and hero, and in the 21st century there are many musicians who have attempted to hold aloft his Afrobeat baton, and to keep his brand of music alive.

Perhaps the most accomplished of that breed is the Brooklyn, New York-based ensemble Antibalas, a band that was formed a year after Kuti died by Martín Perna, a Mexican-American educationist and multi-instrumentalist musician. The band, whose members often number over a dozen, began by playing gigs in Harlem’s parks, clubs and other venues before they released their debut album, Liberation Afro Beat, Vol. 1, in 2000. It was a blast.

For some unfathomable (and perhaps algorithmic) reason, iTunes classifies the album as electronic. It is not. Neither do Antibalas (bulletproof in Spanish) attempt to imitate Kuti’s music. They take the basic elements of Afrobeat—drums, congas and bass—and fuse a modern American idiom into it. Antibalas’ four-piece horn section (Perna himself plays the sax), guitars, a keyboard, and spoken-word-style vocals, may be inspired by Kuti’s sprawling brand of music but instead of cloning it, they take it to a modern, groovy jazz-funk-soul level. 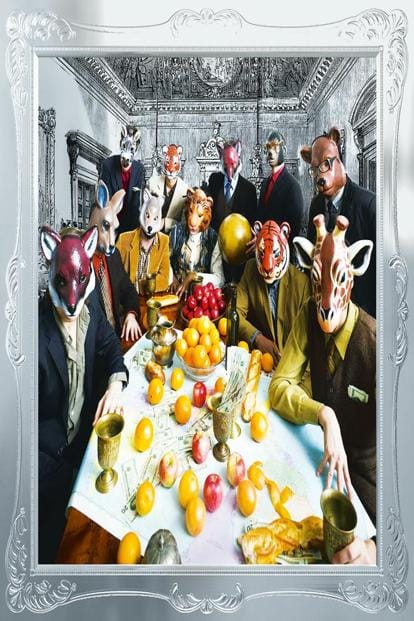 The cover of Antibalas’ 2012 eponymous album.

But, like Kuti’s music, the music that Antibalas make is also political. When a bunch of highly talented musicians play music that is structured perfectly, the end product is usually brilliant. Antibalas’ debut album quickly put them on the map as the 21st century’s best proponents of Afrobeat.

Since then, Antibalas have released five more studio albums, the latest being this year’s Where The Gods Are In Peace. The band itself has undergone many changes, with around 20 members joining and leaving in the course of 16 years. But even though they function more as a loosely confederated collective than a tightly knit band, Antibalas have not lost their singular charm. The new album opens with Gold Rush, a political song that protests and condemns the loot and plunder of the culture and possessions of the indigenous people of America through history, including recent instances such as the Native American protests against an oil pipeline in Dakota.

The parallel of Antibalas’ themes with Fela Kuti’s songs is striking. Kuti’s songs condemned corrupt and exploitative African regimes and the mess left behind by colonialism across much of the continent; Antibalas protest more contemporary injustices, often in the American context. Three other songs (Tombstown 1-3) on the album form a suite with standout horn section solos and a keyboard line over which vocalist and long-time band member, Duke Amayo, sings, the lyrics managing to transcend the complex sonic tapestry.

Antibalas have the unique ability to make spirited danceable music with a high quotient of funk, infusing it at the same time with lyrics that are unabashedly political. On Where The Gods Are In Peace, these lyrics are delivered sometimes in spoken-word form; sometimes in hip hop style; and sometimes in styles that seem influenced by edgy indie rock.

Antibalas’ current line-up of members has 21 musicians (at least a dozen of them play at a time), all of whom are accomplished and super-talented. As is common in collectives, some of them have their own side projects. Nikhil P. Yerawadekar, guitarist and bassist with Antibalas since 2010, is one. An Indian-American, originally from New York’s Queens, Yerawadekar has his own Afrobeat-style band, Low Mentality, whose debut album was released last year. Others from Antibalas, such as trumpeter Jordan McLean and saxophonist Stuart D. Bogie, also have their own side projects.

Antibalas’ ties with Kuti’s legacy have remained strong. In 2008, when Fela!, a musical based on Kuti’s life, was staged in New York, first off-Broadway and then on Broadway, Antibalas were called upon to perform and arrange the music, all of it comprising Kuti’s compositions. And, as any sampling of their discography will demonstrate, even when the band is playing its own compositions, the influence of Kuti’s legacy remains unmistakable in its music.

1. ‘Gold Rush’ by Antibalas from ‘Where The Gods Are In Peace’

2. ‘Six Shooter AKA the History of Dance’ by Nikhil P. Yerawadekar & Low Mentality from ‘Everything Lasts Forever’

5. ‘Sanctuary’ by Antibalas from ‘Security’