Adar Poonawalla: The scion of serum

Adar Poonawalla has been investing in technology from abroad to launch new vaccines at Serum Institute. His family has one of the best collections of European art in India

Adar Poonawalla, 36, son of Cyrus, who set up the Serum Institute of India that manufactures vaccines and immuno-biological drugs and is ranked the 10th richest Indian on the Forbes Rich List, entered the family business at the young age of 20. Today, apart from being chief executive officer of the empire that his father has built, he is also in charge of his personal money management.

“I take care of the finances (personal wealth). It is our CFO (chief financial officer), father and I who take the decisions. There is no one really managing, apart from us," says Adar.

Poonawalla’s money management mantra is diversification. “The investment strategy is a combination: There is debt investment in government bonds, about Rs1,000 crore is invested in equities, and the rest goes into acquisitions and expansions. A portion also goes into social work, while a substantial chunk will be set aside for NBFC (non-banking financial company) investment," he says.

Poonawalla joined the Serum Institute in 2001. “At that time we were very India-centric and our company was not really exporting to more than 30-40 countries. I thought that the opportunity for growth was there and I wanted to geographically diversify our portfolio and add vaccines and products, which I did every two-three years."

Since then, the company’s exports have grown. “Today we are in 147 countries, and 85-90% export-oriented. We have also been increasing our business in India. The ratio will probably be 60:40 as of now. In the last decade, we have been investing a lot in technologies—we have been buying technologies from the US, Europe and Asia," he says.

This year, for instance, the company launched a vaccine against rotavirus that can be stored at a temperature of 25 degrees Celsius and does not need refrigeration.

In the last five years, the company has made two acquisitions in Europe—the Czech arm of US-based Nanotherapeutics Inc. in April, and Bilthoven Biologicals in the Netherlands in 2012.

Poonawalla describes himself as a risk-taker when it comes to investments. “I wouldn’t take risks in things I don’t understand. Maybe I will take more risks in the vaccine space than, say, real estate, where I will take very selective and limited projects with some limited partners, say, some old friends. For that matter, in lending, I would not do that. In the stock market, I will take less risk because it is not an area I am fully familiar with," he says.

He drives the point home with examples. “For instance, we have already sunk in €200 million (around Rs1,500 crore) in Holland and €70 million in the Czech Republic (by way of acquisitions). We have invested over €400 million in Europe in the last four-five years. We have also spent over Rs200 crore on an SEZ (special economic zone) here in India. To add it all up, we have spent close to a $1 billion in the vaccine space in the last five years. Whereas, in real estate, the stock market and other things, I have invested close to about Rs2,000 crore. You can see in terms of the investments that we have made, only Rs1,500 crore is in real estate and equities since we don’t understand those areas and we are not experts or masters."

The company is looking to put its treasury income to better use through acquisitions. “I want to start a diversified NBFC. We are looking at different acquisitions because I don’t want to start completely from scratch. We are looking at an acquisition to the tune of Rs4,000-5,000 crore—that is our budget. We have also bought a lot of land and got some commercial real estate that we have developed and rented out in Pune. We are expanding a little bit in real estate also. Beyond that, I don’t want to spread myself too thin."

Poonawalla gives more credit to experience than education for his investment journey. He says it doesn’t matter whether you are a Harvard graduate or a Hadapsar (Pune) graduate. “I never went to an Ivy League school. I have learnt through experience, exposure, others’ mistakes and successes. For example, it doesn’t take a genius to figure out from the way the stock market has been performing the last two years, you need to buy good stocks with good promoters. Bajaj Finance, Godrej Consumer Products and Britannia Industries are my favourite stocks. Look at the finance, consumer and agro space. Had I bought in 2014, I would have quadrupled my investments. I bought in 2016 and have only doubled my investments. You have to look at trends. It is not education that is going to help you. It is your nose for these things, your experience. In the last 10 years, we hardly invested anything in the stock market. In the last three years, we have invested more than what we invested in the last two decades," says Poonawalla.

He is a firm believer in the India story “for at least the next one-two years", as far as the stock market is concerned. “We believe that the stock market is going to be strong for the next two years at least. After that we can’t say. We are holding most of our investments; we are not selling. Even if there are little dips in the weeks to come, it will pick up."

When it comes to art investment, Poonawalla says, “We have got perhaps the best European art collection in India. We have been buying a lot of international art. We have got close to a $70-80 million art collection, which we built partly as a passion and partly as an investment. We started buying in the last three-four years from auction houses like Christie’s and Sotheby’s. If you come to my home in Mumbai, you will see at least two-three (works by) Claude Monet, Pablo Picasso, Auguste Renoir, Marc Chagall and Salvador Dali. All these artists’ works are usually bought and collected by European art collectors. We (my father and I) always had the passion but couldn’t afford it before, till about five years ago."

Asked how he knows if he has picked the right piece of art, Poonawalla says it becomes clear only when he thinks of selling it. “But generally speaking, there are some principles that I use. One, it has to be a signed painting by the artist. Two, a quality check is done to check for any damage. I would never buy a piece of art unless it is painted by the painter in the main years in which he was known and famous for. There is no use of buying (M.F.) Husain before he became famous. And the subject is very important. You have to buy the right subject, say, Husain’s horses or Mother Teresa." He buys art only at auctions, and not at private sales.

Poonawalla also has a stud farm in Pune. “We have got a number of stallions which we import and we breed our champion racehorses there. That is a passion and a hobby that we enjoy during the weekends. It is the only legacy passed down from our grandfather Soli A. Poonawalla, who established Poonawalla Stud Farms."

He has invested in other companies too. “I have a stake in Svasti, which is a microfinance company. It is a company based in Mumbai and lends to slum-dwellers. I have invested in Mumbai-based retail pharmacy chain Wellness Forever, where I own a little more than 10% stake."

Asked what he has learnt from his father about investing, he says, “Well, not so much in terms of investment but in terms of the way you manage people, look at opportunities, weigh risks—I have learnt these from my father. He grew the business from nothing in 1966. What I have learnt is the way to access opportunities without wasting time. For example, I know in 10 minutes whether it is worth looking at something or not. Not waste hours and days deliberating with teams. The skill to be able to evaluate something very fast is something that I learnt from my father. I also learnt to not look at short-term money or gains at the cost of integrity and ethical practices. That is something we have always maintained. We could have taken a lot of short cuts, which we didn’t."

Cars: I have an extensive car collection. I have more than 30 cars. But I use them seldom, during the weekends. Mainly I use sedans for comfort. Rolls- Royce and Bentleys are my preferred choice. I use a S-class Mercedes for work.

Holidays: It is either sailing or skiing. In winters we head to Courchevel or Swiss Alps and in summer to the Mediterranean. We charter some yachts on occasions and host friends over there. 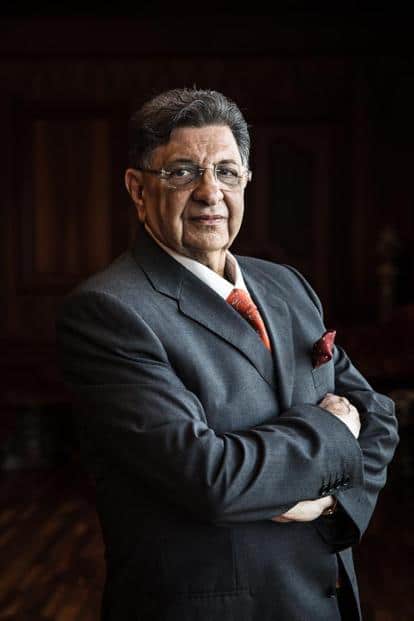 What is your money mantra? The investment is a combination—there is debt investment in government bonds, about Rs1,000 crore invested in equities and the rest goes for acquisitions and expansions. Some portion also goes into social work, while a substantial chunk will be set aside for the NBFC investment.

Brief: Vaccine billionaire Cyrus Poonawalla founded Serum Institute in 1966 and went on to make it one of the world’s largest vaccine makers by volume, producing 1.3 billion doses annually. Serum Institute, which son Adar helps him run, reported a profit of $360 million (around Rs2,000 crore) on revenue of $695 million in the fiscal year ended March 2016. But sales have since flatlined amid increased competition. Poonawalla is investing $150 million in a new factory to make a range of vaccines, including for dengue, pneumonia and diarrhoea. Poonawalla recently contributed $2.5 million for a hospital named after his late wife, to treat the underprivileged.