A spontaneous encounter with a jazz ‘genius’

The renowned jazz trumpeter Clark Terry called Justin Kauflin, 'one of the most talented pianists who ever walked the face of the earth'

An evening of pure joy is rare, but that’s what Q’s Bar and Lounge—the jazz bar started by the legendary composer and record producer Quincy Jones at the Palazzo Versace in Dubai—delivered. Small, intimate, old-world feel, oversized leather chairs, a long bar at the back, and a stage up front—piano, bass, drums and, as the evening progressed, a vocalist joined in. The energy this young band revved up was exhilarating, and at the heart of it was the incredibly talented lead pianist, 31-year-old Justin Kauflin, leaning into his piano, a beatific smile on his face, his fingers flying into a blur like a hummingbird in midair. My heart flew too.

Dubai is hardly New Orleans or New York, and I was intrigued to find such a high-calibre jazz performance here. So I went back to chat with Kauflin, to understand what brought him here. I got more than I bargained for, a story of tremendous talent, adversity (he went blind at 11), courage, laughter, luck, passion, and I suppose if I have to put it in a line, the belief that the best way to make good music is to be a good human being. Yup, it gets pretty deep.

Up close, Kauflin has the same radiant smile, but what I find endearing is how unassuming and grounded he is. He almost cringes when I mention words like “prodigy" or “genius"—labels that have been liberally associated with him in the media. The renowned jazz trumpeter Clark Terry called him “one of the most talented pianists who ever walked the face of the earth". But Kauflin just sees himself as someone who is trying his best every night. “All I can hope is that, if nothing else, my passion for what I do comes out", he says. “Because I love it so much."

That love for music was always there. Even at the age of 2, he would “reach up and pluck melodies out of the piano" at home. He took violin lessons at 4, and then piano lessons from a teacher who worked with visually impaired students. He was like any other child; his parents would have to get him to practise. “My bargain with them was that if I practice the piano they’d let me play video games," he laughs. His eyesight was failing due to a degenerative disease but he could still see well enough to play video games and basketball. 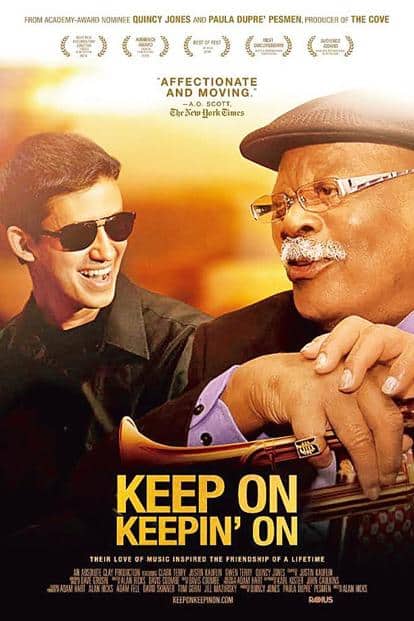 All that changed at 11 years of age, when, despite many operations, he went completely blind. Ironically, that set him on the path to jazz. In high school, he was put into a jazz programme, and “it took no time at all for me to fall in love". Jazz is primarily an aural tradition, and suddenly he felt equal to other students, in fact excelling as there was nothing holding him back. He loves the spontaneity, the communication that happens, the fact that jazz is very structured but within that structure there is freedom to improvise. “I love that. It became an all-encompassing thing, and I have been chasing after it ever since."

A series of “crazy convergences" followed. His college friend, musician Alan Hicks, introduced Kauflin to Terry. The year is 2004, Terry is 84, and as luck would have it, he is losing his eyesight due to diabetes. They hit it off, and Terry takes him under his wing, teaches him, champions him, mentors him—he is arguably the biggest influence in Kauflin’s life. Kauflin, in turn, helps Terry make the transition to blindness.

They become close, very close. In fact, so close that Alan Hicks makes a film, Keep On Keepin’ On (2014), on their relationship. And that’s when the next “crazy convergence" happens. One day, while filming, there’s a visit by another jazz legend—you guessed it, Quincy Jones. Turns out, Jones was Terry’s first student, way back in the 1940s, and had come by to see his beloved mentor.

It’s a surreal day. Like two unlikely bookends, Terry’s first student meets Terry’s last student, separated by some 60-odd years. One thing leads to another and Jones signs up Justin. The first gig he did for Jones was at the Montreux Jazz Festival. Connect the dots, and that’s how he is at Q’s Bar Dubai. In between are two albums, numerous performances at jazz bars, theatres, festivals.

I am curious—what did he learn from these two jazz greats? Music for sure, but also broader universal advice. For example, Terry used to tell him, “some people are vicious, uptight and evil. And they sound vicious, uptight and evil". Kauflin laughs. “Who you are as a person is reflected in the art you create," he says. “Clark encouraged me to be a better person. To care genuinely about others, because it will reflect in your music."

What makes Quincy Quincy? Justin pauses to think. “To me, it’s his desire to grow, his constantly wanting to better himself…and he is 84 now," he says. “Striving to be better is a never-ending journey. We never hit it. I hope I can cultivate that in my life."

Or, as Terry would say, “Keep on keepin’ on". Radha Chadha is one of Asia’s leading marketing and consumer insight experts. She is the author of the best-selling book The Cult Of The Luxury Brand: Inside Asia’s Love Affair With Luxury.

The writer tweets at @RadhaChadha