With 15 exhibitions in six Goan homes, GoaPhoto blurs the boundaries between a gallery and the living space

Three generations pose nonchalantly in one of Prabuddha Dasgupta’s photographs from Edge Of Faith, his staged, black and white, documentary series focusing on Goa’s Catholic identity. In the forefront, seated casually on a chair, is Sacha Mendes, while at the back of the room, her parents sit on either side. Still further, on the wall behind them all are framed portraits of one set of grandparents.

The image was curator Lola Mac Dougall’s first encounter with Goan interiors, back when she had included the image in a magazine publication (in 2013) for the embassy of Spain in New Delhi. “It stayed with me because it portrayed her (Sacha) with a bold attitude in her family’s living room, with her parents in the background, somehow representing tradition," she says over email. Earlier this year, soon after Mac Dougall and her husband, Nikhil Padgaonkar, now residents of Goa, had uninstalled their January 2017 edition of Jaipur Photo, they were taken by a chance suggestion by photographer Dayanita Singh during a post-lunch conversation at her Saligao home.

They had been speaking about the challenges they had faced while mounting the monumental displays for the inaugural edition of GoaPhoto festival in February 2015 across heritage buildings in the state’s capital, Panaji. Why didn’t they avoid all the hassle of permissions and bureaucracy and intervene directly in people’s homes instead? Singh asked. “It all started in an informal, half-joking manner; we even discussed the idea of ‘domesticating’ photography," Mac Dougall says.

The four-day event, which started on 23 November, has thus evolved into an intimate affair involving 15 exhibitions spread across six Goan homes, with five intervening curators, including Mac Dougall, who describes the festival as a site-specific one. Screened projections, curated by Anshika Varma, and a photo library by the collective BIND are also part of the programming. Saligao was chosen as the hub for the revamped festival not just for its village charm, its central location in north Goa, or because it was the birthplace of this new direction, but also because Mac Dougall and Padgaonkar knew owners of houses there, including the famed set designer Aradhana Seth.

“The idea of dialogue is key to our proposal: our curators were asked to explore the theme of ‘the domestic’ and to respond to the location their exhibitions will inhabit, as the private spaces that constitute our venues will retain their in situ furniture: therefore it is a case of two aesthetics—the photographic and the domestic—engaging with each other," says Mac Dougall.

She, along with the rest of the curatorial team, which includes Eder Chiodetto, Cristina de Middel, Akshay Mahajan and Jesús Micó, perceives the format as antagonistic to the idea of the “white cube", where any trace of the domestic is erased so that the photographs form the sole presence. Instead, the personal stories of the inhabitants will inevitably enter the experience. “We welcome the shoes at the entrance, the half-finished cup of tea, because we feel those are the details that will make our exhibition come alive," she says. “And it is in this sense that we refer to the idea of the revamped GoaPhoto being intrinsically related to ‘living heritage’...because it is a response to Goan ways of living". 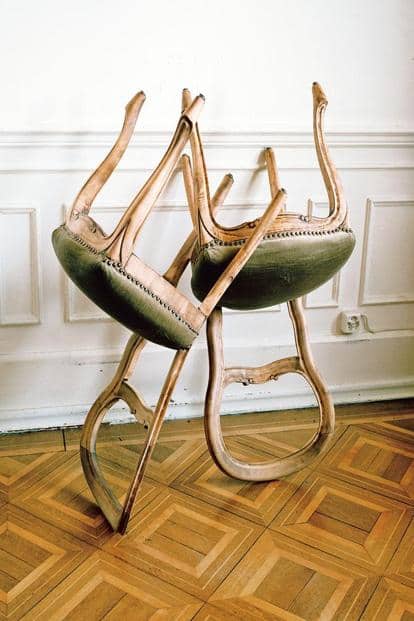 Each of the six homes has been titled according to either an architectural, curatorial or ancestral feature, and the curators have chosen to focus on unique elements to showcase photographic work. For instance, the 1835-built Quinta Serena, which, as Mahajan writes, “houses unique objects, including a double-seater palanquin, woods of African provenance, old gin-bottles, and family portraits of the de Souzas", will have, among other series, Elisa Gonzalez Miralles’ Wannabe hung from a wrought iron poster bed in the guest room.

The series has close-up shots of Japanese Baby Dolls—latex human-size dolls ordered from a catalogue—alongside portraits of Japanese women who imitate that aesthetic. “The women dress, make-up and even undergo plastic surgery to that end," writes Mahajan, indicating that the work speaks also about the subjugation of women elsewhere.

At House of Enquiry, which belongs to Seth, the mother-of-pearl shell windows—a ubiquitous feature of centuries-old Goan houses—at the entrance porch will form the backdrop for Villa Argentina, which is the name of the house that the photographer, Aruna Canevascini, shares with her Iranian-born artist mother in Switzerland. “This is a collaborative project where Canevascini recreates her mother’s poetic universe, filtering it through her own, using her as a model sometimes and at other times arranging domestic objets trouves for the camera," says Mahajan.

Visitors are invited to participate in a walking tour that revolves around the six homes while “seamlessly" mixing the local and global in the village of Saligao. “I feel part of the excitement that has been generated around GoaPhoto has to do with the possibility to visit domestic spaces we would otherwise never be able to access, and perhaps it relates to voyeuristic impulses that have often been attributed to photography," says Mac Dougall. “It is a way to open up Goa on many levels—aesthetic, domestic and sensorial."