A ‘Shaheen Bagh’ state of being 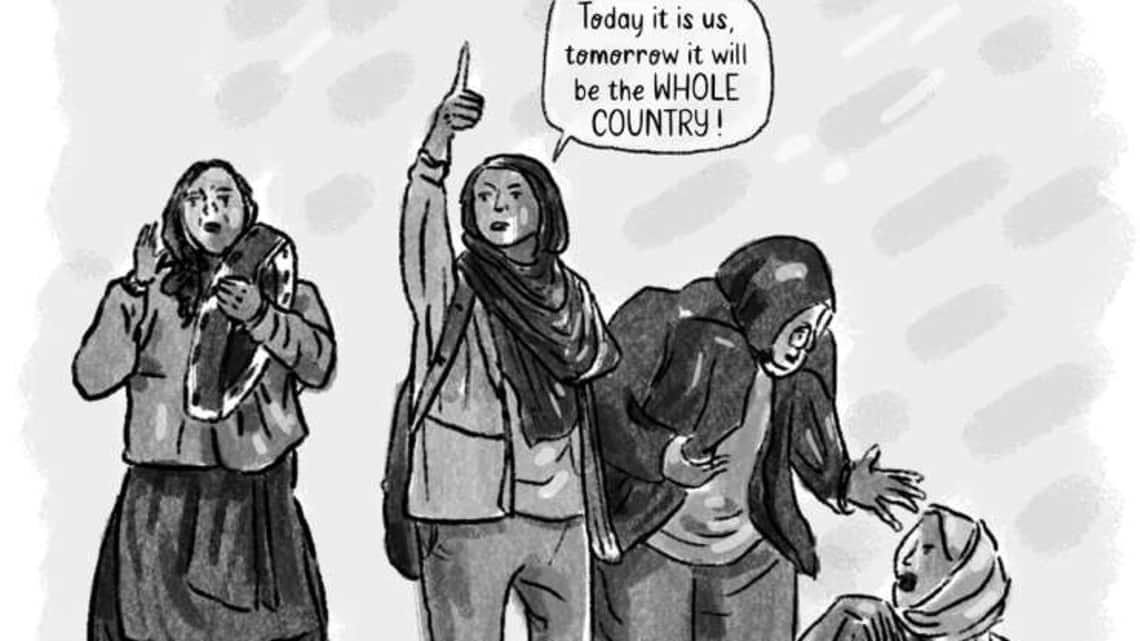 Detail from a page from the book. (Ita Mehrotra/Yoda Press)

Ita Mehrotra was familiar with Delhi’s Jamia Nagar neighbourhood but not much beyond the confines of the Jamia Millia Islamia campus. Then, the Shaheen Bagh protests erupted in 2019 and, like thousands of Delhiites, she became privy to the throbbing pulse of the area. “The movement helped us, especially women, to own public space like never before,” Mehrotra says. “It offered us a new experience of the geography of Delhi.” That experience comes alive in Shaheen Bagh: A Graphic Recollection, her visual narrative, published by Yoda Press.

A chronicle of the weeks of sit-in at the now iconic site in south-east Delhi to protest against the exclusionary Citizenship (Amendment) Act (CAA) and proposed National Register of Citizens (NRC), the book began its life in a sketchpad. “I would sit at the Shaheen Bagh protests and draw,” Mehrotra says. “At the time, I put out some of the images as posters on social media—as a call for action—to forge solidarities, raise funds for relief and aid.” But the book was the fruit of a labour of love, fuelled by interviews, readings and research.

For the most part, Mehrotra’s artwork appears deliberately simplified, cartoonish even, rendered in black and white, with splotches of grey in the backdrop. Occasional flourishes lend dynamism to some pages, such as one where a surging conflagration threatens to escape the bounds of the frame. The theatre of the street that Mehrotra captures—especially, the texture of her art—signals her affinity with the style of Maltese-American journalist and cartoonist Joe Sacco, who revolutionised graphic non-fiction narratives with his series of books set in Palestine.

Aside from Sacco, Mehrotra lists Iranian Marjane Satrapi and Indian artist Orijit Sen as her key influences. “These people could have been traditional journalists or made films but they chose to work with graphic non-fiction instead,” she says. “That’s because this format is keenly sensitive to people’s privacy, especially about revealing their identities.” Being mindful of such nuances is crucial in our contemporary surveillance cultures, where Artificial Intelligence may be deployed for facial recognition of protesters, leading to their subsequent arrest and persecution.

A page from the book. (Ita Mehrotra/Yoda Press)

Mehrotra tells the story of the Shaheen Bagh movement through the eyes of Shahana, whom she met in January 2020. A young woman who grew up in the locality, Shahana was as amazed as the rest of the world by the grit, courage and fortitude of the women keeping daily vigil at the site. As a child, she resented living in the ghetto-like environs of Shaheen Bagh but bitter experience has made her grateful for the wisdom of her parents, who refused to move to another part of the city even when they had the means to do so. “… it’s only in these past few months with the protests that I’ve realized how it’s so SAFE… for my family to live in Shaheen Bagh,” as Shahana says in the book.

A cursory survey of the vicissitudes faced by Shahana’s family—generations scarred by Partition and sporadic riots—allows Mehrotra to delve deeper into the rot that has brought us to divisive policies like the CAA and NRC. “My role is to poke and probe, connect and engage with people, amplify their views,” Mehrotra says. “I want to define my position, too, make my voice clearly heard.”

Investment in activism and shaping public awareness are the twin purposes that have steered Mehrotra’s work as an artist and educator. Around eight-nine years ago, when she was in her early 20s, Mehrotra took this route instead of cloistering herself in the ivory tower of the studio. Her previous projects include documenting the lives of women who started the Chipko movement in 1973 and depicting Manipuri activist Irom Sharmila’s decades-long hunger strike to end the Armed Forces (Special Powers) Act. Using art as a tool to interrogate rights and issues of accessibility, Mehrotra has worked with underprivileged children, created murals and public projects. “I want to show how art can become a tool to express the voice of the people,” she says.

Looking at Mehrotra’s images of Shaheen Bagh teeming with people feels eerie as the second wave of the pandemic runs its course. Indian cities that followed the example of the women of Shaheen Bagh and echoed with anti-CAA protests are emptied out by disease and lockdowns. A graver fear of public amnesia, in the face of the virus, looms large.

Covid-19 disrupted the protests against CAA and NRC but the sentiments have, hopefully, not faded from our collective consciousness. So, instead of “ending” her story, Mehrotra segues it into the farmers protesting against another set of unjust laws, expressing support for their “sisters at Shaheen Bagh”. Shaheen Bagh is no longer a place or movement—it’s a state of being.

The book is on preorder at http://yodapress.co.in/

Also Read: From Godhra to Shaheen Bagh, there are many 1984s: Sarbpreet Singh