A portrait of the artist as a wandering gay man

In his debut novel Lean Days, journalist Manish Gaekwad sketches a layered portrait of the artist as a not-so-young gay man in India. In this case he is a trilby-wearing, mildly-balding 30-something, navigating big-city and small-town life, complete in its drama, poetry, ugliness and foibles. He approaches this travelogue and coming of age with the flair of a Baudelairean flâneur, combined with the imagination of a poet, as he navigates the chequered fabric of cities, from cramped gay bars to grimy back alleys and public toilets to centuries-old palaces, tombs, dusty bookshops and epiphany-inducing Sufi mehfils (soirees).

As the writer travels around the country in search of inspiration and love, he unpacks what it means to be gay and single in India, a country which recriminalized same-sex relationships in 2013. The book presents cities as a collection of encounters—chance sexual experiences with strangers, meetings with accidental poets, and a revisiting of the characters and cities of the narrator’s past. He is a writer in the making whose lexicon of urban India winds through familiar landscapes and their less-known subcultures.

Lean Days opens at a café in Chennai, where the narrator observes, “The thick drawl of Madras is so attractive, I am almost tempted to approach the loud-speaking, bespectacled boy at the coffee shop: ‘Please lower your tone, you are exciting my loins.’" Bengaluru is “a paradise for flâneurs", a city whose perfect weather encourages perambulations through its tree-lined lanes, even though they are never walks towards possible loves. Hyderabad is a city of palaces, designer soirées and the search for the famed alley of courtesans, the historic Mehboob Ki Mehndi. Up north, Delhi is a pastiche of glittering Gurugram’s failed promises, the dargah of Nizamuddin Auliya, the clichéd neon signage of Paharganj’s backpacker hotels, and Ghalib’s melancholia. Ajmer, a central spoke in the narrative, is a whirl of the sights and sounds of the Urs festival. Outside the dargah, on the streets, is the other city, a cacophony of lipsticked “disco dancing eunuchs" of the Andar Kot market, the white-faced “boy whores" in the lanes of Nizam Gate, and smoky kebabs and fragrant biryani stalls. As the narrator says, “I’m looking for a farishta in a city where over a hundred thousand people have congregated to offer penance and request for mercy. How will I find the angel? I have to play it by the ear to hear in his call my name; search for some sign in the air." Srinagar is etched through vignettes of local politics, the chinars, the lakes and the gardens. It is a place to exorcise his real and imagined demons and begin writing the book.

The writer returns to his erstwhile home and to his mother in the city of Calcutta (Kolkata) where he was born on the first floor of a kotha (brothel). It is in this city that his private history intersects with a larger queer history of 21st century India and the challenges of coming out as gay: “It was too early to be gay. There was no Internet to even find out what that meant. In such an age how do you meet boys like me? I grew up in a controlled environment, less by my mother’s leash than by my own boundaries." Finally, he returns to the only place that bears the semblance of home—Bombay (Mumbai). He calls it a city which “tramples and runs over so many dreams that its carriers have the stunned long-face look of Modigliani sitters" —and yet it is the city that makes him feel alive.

This is an artist’s narrative that passes from one cruising spot to the next across the length and breadth of the country. There are visceral encounters, humorous asides and snapshots of cities as well as brief memoirs of love and longing. These are interspersed with a tangled skein of poetry, literature and Sufi philosophy. 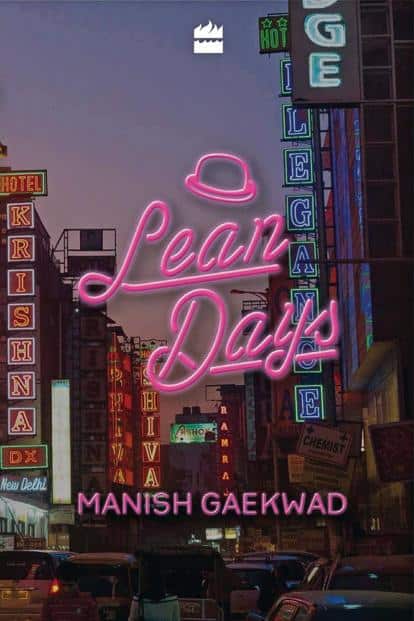 From Hampi to Chandigarh, Lucknow to Kathmandu, Gaekwad’s hero tramps through a diverse sexual and spiritual topography through various urban settings. He picks up small objects through the journey—a turquoise pocket comb in Hampi, a kumkum dibiya in Hyderabad, a tattered copy of Agha Shahid Ali’s collected poems, The Veiled Suite, from a stationery store in Srinagar—all mementos of a queer person’s travels.

Lean Days attempts to question the heteronormative ideal and the idea of un-belonging even as it charts an artist’s real and imagined voyages. As always, such a quest is more about the journey than the destination—and the many shape-shifting narratives that turn into memorable stories along the way.