A millennial’s big dreams for Dalit and Bahujan authors

Yogesh Maitreya, the founder of Panther’s Paw Publication, wants to take Dalit and Bahujan voices to the world 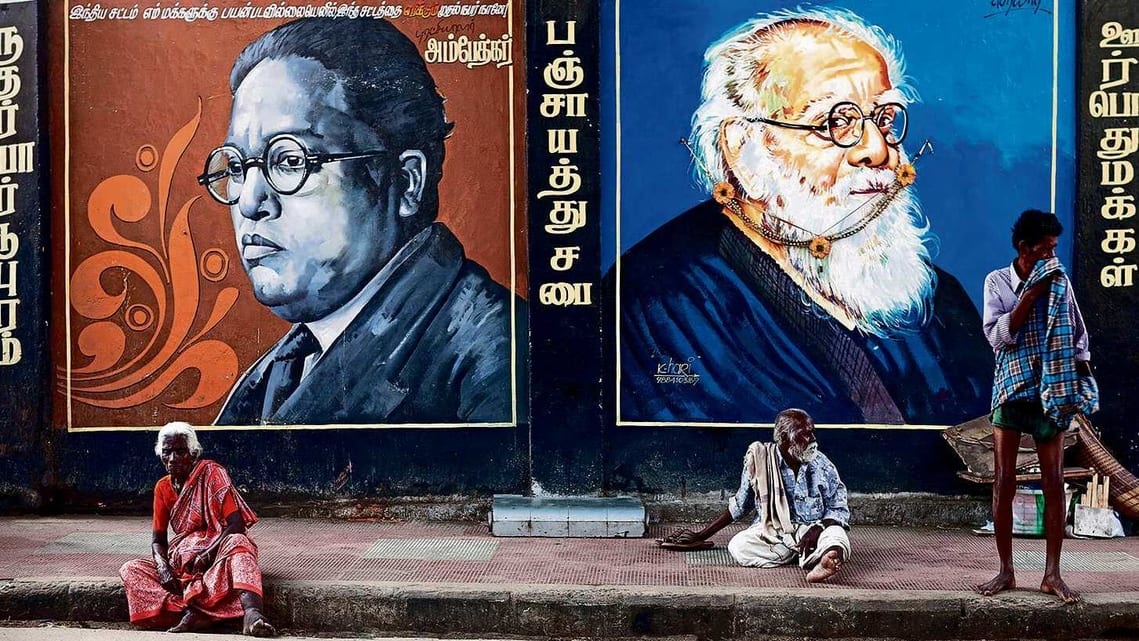 Wall paintings of Babasaheb Ambedkar and Erode Venkata Ramasamy, both famous for their fight against discrimination. (Getty Images)

On 22 March, just before Prime Minister Narendra Modi imposed a nationwide lockdown to combat covid-19, Yogesh Maitreya rushed headlong to shift and secure books and belongings from his hostel room on the Tata Institute of Social Sciences’ (TISS’) Mumbai campus and then scrambled to board one of the last flights out of the city to his home town, Nagpur. It still hasn’t been possible for him to return.

Maitreya—he was born Yogesh Suresh Wanjari—had spent seven radically transformational years in Mumbai before covid-19 disrupted his life. The 35-year-old had initially come to study (he is a PhD researcher at TISS) and pursue the possibility of becoming a writer. Very quickly disillusioned by what he learnt about the mainstream publishing industry, he instead became powerfully fired up with the idea of creating an alternative ecosystem. With that end in mind, four years ago, he established the idealistic and consistently intriguing Panther’s Paw Publication, which focuses—according to its Facebook page—on “Ambedkarite Literature”.

In the bio note of Flowers On The Grave Of Caste, his impactful debut collection of short stories, Maitreya describes himself as a poet, translator, columnist, curator, publisher and researcher. But it’s clear he’s actually many more things besides—a restless tornado of ideas who has been reading, writing, reviewing, thinking and planning non-stop throughout our collective pandemic predicament. Earlier this month, when I emailed to ask what motivated these furious labours, he said, “I want to make Panther’s Paw Publication a big, a huge, publication house.”

He explained, “I am ambitious in this sense: I want Panther’s Paw books to reach to maximum parts of the world, especially in Africa (where there are strong potential connections), but without using any of the hegemonic mechanisms which prey on large chunks of Dalit-Bahujan labour. I will pour in all my potential and energy to make it happen. By the time I am 52 (note: he was referencing my age), I want to publish at least 100 young Dalit-Bahujan authors.”

Maitreya represents the millennial generation of intersectional activists, whose efforts are directed at several targets at the same time. In admittedly limited ways, their emergence indicates that contemporary India has in fact applied some successful correctives in its post-colonial emphasis on social justice. Thus, all through his childhood in Nagpur, where he grew up in what is effectively ground zero for the Dalit social renaissance—his family converted to Buddhism alongside Babasaheb Ambedkar in 1956—Maitreya says caste never permeated significantly into his consciousness. That changed only when he needed a certificate to access a college scholarship.

In his unforgettable, obviously semi-autobiographical, short story The Sense Of The Beginning, Maitreya writes: “I have inherited no great legacy of education. But in our dalit colony, every day, after the evening prayer in Buddhist Vihara, glorious stories of the struggles of Dr. Babasaheb Ambedkar and his achievements in education were narrated and we were told to be highly educated like him. But how? No one told us.”

In Dilemma, his 2016 poem, the young author describes those challenges in visceral terms: My father sang to me/ In a language his father taught him/ Hence, in it, his rage had clarity/ His love was sublime/ But I grew up much greedy/ I wrote in English and kept on writing;/ Later father’s words turned voiceless to me/ I turned deaf to his song, I grew up mean./ Today, I imagine/ If I have a son or a daughter,/ What song shall I sing to them?/ Precisely, in what language shall I sing?

Via email, Maitreya told me more: “There was no legacy of books in my family, and after school I lived a kind of vagrant life. I was confused about what to do. Our family’s financial situation wasn’t strong, so I also had to work for a few years. I tried many things, from the merchant navy to a hotel management course, but somehow never felt connected with them. This vagrancy and confusion of almost nine years made me think about what I really want to do. Then, at 24, after I experienced my first breakup, which left me sad and lonely, I decided to start a fresh inning in studies.”

The covers of Yogesh Maitreya's books.

Everything changed in his life after that, says Maitreya. “I joined BA with English literature as one of the courses, and have been swallowed up by books ever since. Because when I began to read stories, novels, poetry, I discovered that my pain and confusion is shared by millions of people across the world. I was not alone. And when I began to write, I witnessed that the life I led was not meaningless at all. It was just that I did not yet have the words to ascribe meaning to it. This personal revelation unravelled the power of writing to me.”

That rock-solid commitment to the power of the word radiates palpably from Maitreya’s writing, which spans an impressive gamut from fiction to poetry to essays and translation. The six stories in Flowers On The Grave Of Caste are an outstanding contribution to contemporary literature: wry, surreal, determined, angry, anguished and very beautiful. They explore the conundrums implicated in questions of merit and privilege, and illuminate different worlds: the village, university dynamics, sexual politics. I found myself diving right back into them to re-read, and confirm my initial and immediate reaction that this is an important new voice that cannot be ignored.

That view is only further underlined by the remarkable Of Oppressor’s Body & Mind: Essays On Language, Literature And Cinema, where Maitreya displays an acute and highly original critical sensibility in addressing an astonishingly wide cultural spectrum, from the movies Vicky Donor and Dilwale Dulhania Le Jayenge to Saadat Hasan Manto and Pankaj Mishra.

In my view, this slender collection with an ambitious, universalist bent is essential reading for the Indian 21st century. As Maitreya explains in his introduction, “the only uniformity is the working of caste through the oppressor’s body and mind…. Out of an unwritten public law, a Dalit has been shunned from talking about dominant caste people as a discourse. Because hitherto, the spaces and means to produce such discourses have been dominated by them. These essays claim to change this depressing scenario.”

Vivek Menezes is a Goa-based writer and photographer.