A Dalit at the temple door

As Kerala admits Dalits as priests in its temples, a look at 14th century Bhakti saint Chokhamela who, despite his faith, was barred access to his lord due to his low birth

As Dalits in Gujarat stand up for their right to wear the moustache, it is more than a little ironic that Kerala, where moustaches were once methodically taxed by caste, should be admitting Dalits as priests in its temples. Though temple entry in the region was first granted to untouchables in 1936, the sanctum sanctorum is generally off limits for those who cannot, by birth, claim the dignity of the sacred thread. This custom is now broken—the thread belongs not to those who claim divinely exalted bloodlines, but to those who proactively seek the responsibilities attendant upon temple service.

The 14th century Bhakti saint Chokhamela might have rejoiced. Enthralled by the deity in Pandharpur in Maharashtra, his Mahar status, despite the fervour of his faith, had barred him access to his lord. He was resigned to his fate, but appealed poignantly to Brahmin gatekeepers of the shrine: “The cane is crooked, but its juice isn’t crooked…Chokha is ugly, but his feelings aren’t ugly. Why be fooled by outward appearance?" 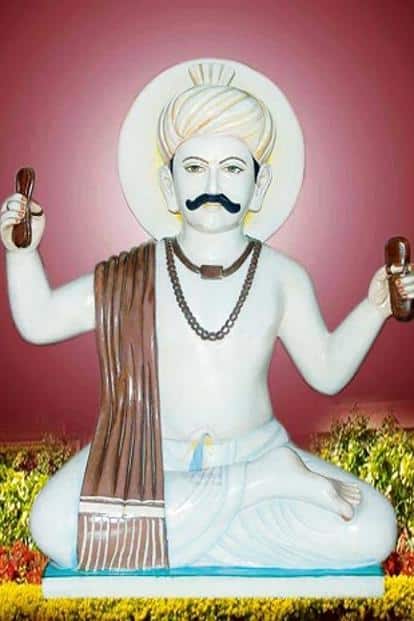 Chokhamela is the only untouchable among Maharashtra’s (male) Bhakti thinkers, and spent most of his life doing the peculiarly menial work Mahars were mandated to do. His fellow saints in the Bhakti pantheon, in comparison, came from relative privilege, though few could be reckoned as part of the elite—Tukaram was a failed shopkeeper, Namdev a god-fearing tailor. Yet, the fact that while they were low, they were not from the lowest, permitted certain liberties to these men whose verses could, therefore, take the risk of packing a punch. Jnandev, son of an ostracized Brahmin, is said to have mocked the old guard by causing a buffalo to produce sounds that seemed worryingly close to Vedic verses, while Tukaram was relieved that he was “no wretched pandit splitting Vedantic hairs". They could all, to some degree, get away with their radicalism in a deeply hierarchical social order, but Chokhamela had no such option.

Instead, he couched his devotion in terms of his social conditioning as a Mahar. Addressing the deity as he might an upper caste, he says: “I am the Mahar of your Mahars, I am so hungry; I have come for your leavings, I am full of hope." In another verse, he brings a “bowl for your leftover food"—with no access to the shrine and its blessed occupant, perhaps he could satisfy his devotion by serving the deity as a lowborn serves his overlord, eating his scraps and offering complete submission. “O God, my caste is low; how can I serve you? Everyone tells me to go away; how can I see you? When I touch anyone, they take offense…Chokha wants your mercy." However, while there is anguish, he does not blame those who designed his shackles and marked him from birth as undeserving of anything better. Indeed, he goes as far as to flagellate himself, blaming karma for his terrible plight. In a previous birth, he explains dejectedly, he must have disrespected god; “this (present) impurity is the fruit of our past."

While there were moments when Chokhamela seems on the verge of standing up to those in power (“The earth and the Ganga are common to all, irrespective of caste and religion"), it was his son from his wife Soyarabai who was more blunt in his criticism of the way things were. Karmamela, as the boy was known, spoke thus to the deity: “Are we happy when we’re with you? ... The low place is our lot; the low place is our lot; the low place is our lot, King of Gods! ... It’s a shameful life here for us. It’s a festival of bliss for you and misery written on our faces." Therefore, it isn’t surprising, as the late historian Eleanor Zelliot noted, that Karmamela, with his sharper critique, finds fewer devotees singing his verses during the annual pilgrimages to Pandharpur today. Chokhamela, in contrast, has been elevated as the product of a divine birth: God met his mother once and bit into a mango she offered him. When he left and she looked at the half-eaten fruit, there lay in its place the baby Chokhamela.

Part of this promotion may also have been due to his own efforts—borrowing the sociologist’s expression—to Sanskritize. He spoke out against animal sacrifice not only because “you will be inflicting cruelty on another life and destroying it", but also because, one suspects, this was more in consonance with ritual “purity". He railed against alcohol, which in many parts of India was associated with certain “low" forms of worship; this too seems to have helped his posthumous social upgrade. God appeared to him in several forms: One version has Chokhamela struggling to drag away a dead cow, another duty that fell upon the Mahar, and the deity, manifesting as a young man, lent him a hand. But most critically, after he was rejected at the temple’s gates, the lord came to him instead, offering him commiseration as much as he did company, the two of them sitting by the riverside.

At the end of the day, Chokhamela was devoted but did not transgress lines drawn by society and its privileged elders. He died in an accident, it is said, when labouring on a construction site, and even his bones were found to be chanting the name of god. These bones were carried to the temple and buried at a spot that still receives visitors. Even in death, Chokhamela had no access to the sacred premises. Bones are impure, but since he was also impure in life, his memorial stands at the foot of the temple’s steps, outside those very walls where he once beseeched the shrine’s guardians for one glance, for one opportunity to satisfy his desire to behold the deity. Unlike those Dalit priests in Kerala who have now entered the heart of the sanctum six centuries later, old Chokhamela had to settle precisely for the place which, in his own lifetime, he was told was where he really belonged: the door.

Medium Rare is a column on society, politics and history. Manu S. Pillai is the author of The Ivory Throne: Chronicles Of The House Of Travancore.