In a new exhibition at the Mumbai gallery, five artists respond to our ever-changing built environment

A sprawling slum adjoining a plush building complex typifies the landscape of developing nations the world over: an unseemly result of a sudden rush of capital into an area without centralized planning. The modern, historic, urban and rural seem locked in a perpetual jostle to dominate the built environment. With an eye towards these ever-changing dynamics, the Jhaveri Contemporary gallery, in a new show titled Windows, brings together five artists from across generations, who respond to modernist architecture and design through diverse media. 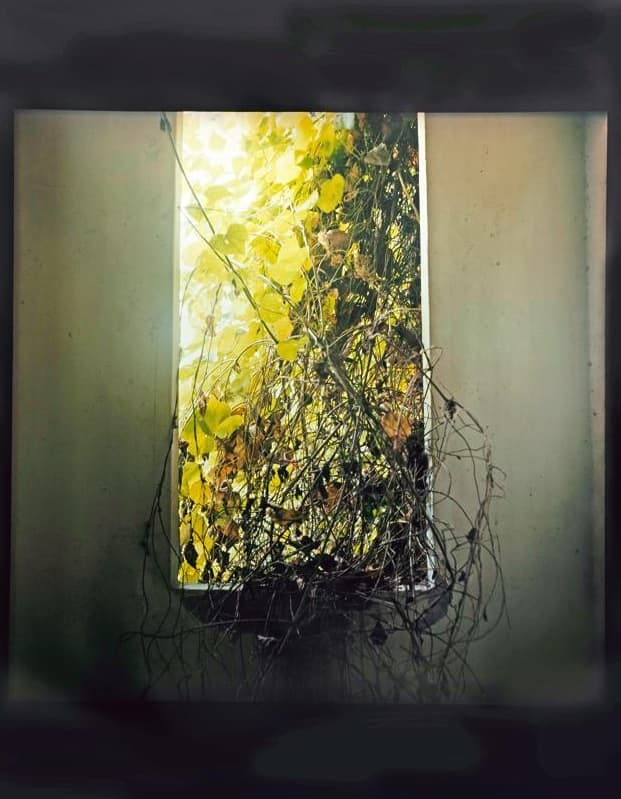 Simryn Gill’s haunting set of photographs lends the show its title. In the five photographs, her lens sits inside a pitch-dark room, looking out through the only source of light—an open window—to nothing in particular: a tree, the parapet of a nondescript white building meeting the sky, or a forest in the distance. The work has an arresting quality where the eye is drawn towards the most distant point in the light-bathed scene outside, only to suddenly become aware of the sheer darkness that envelops it. The framing evokes a somewhat paradoxical feeling of claustrophobia at one moment, and in the next, the mind shifts to the sun-lit outdoors, a commentary perhaps on the tension between “man-made" and the “natural world". The play of light is strongly reminiscent of Johannes Vermeer’s sensitive handling of light in his paintings as it enters through a window. The chiaroscuro effect also lends Gill’s work a charged, Caravaggesque quality, where it seems a human figure might dramatically enter the frame at any moment, visible only with the help of light flooding in from the window.

Priya Jhaveri, who has curated the show with her sister and gallery co-founder Amrita, says, “Today, architects are also working as artists and showing in gallery spaces, so we wanted to explore the flip side of this phenomenon." The architectural elements also inspired the late Anwar Jalal Shemza, a Pakistani artist working in the UK. After an early brush with modernism via the works of Paul Klee, he found his own voice, combining Western abstraction with Islamic architectural elements. His aquatints play with the geometric shapes of semi-circles and squares, which sometimes resemble the finials of mosques.

Another Pakistani artist, working more than a generation later, is Seher Shah. A trained architect based in the US, Shah’s collage series, Capitol Complex, uses pictures of Le Corbusier’s Brutalist buildings in Chandigarh in various permutations. The cutouts of a three-dimensional building on a 2D medium, paper, lends a playful quality to the work.

A surprise in the show is Lubna Chowdhary, a UK-based ceramicist whose work has been rarely seen in India. Her Edgeland series comprises myriad shapes suggesting architectural fragments. She is interested in “the points in cities at the edges where the urban areas merge into industrial landscape, which in turn merge with the rural landscape". This can be seen in an orange-glazed object which resembles the pinnacle of a Gothic cathedral, while another object assumes the ultra-modern biomorphic form of freshly squirted cream that extends vertically into space. With its blue and orange glazes, Edgeland stands in stark contrast to her second work, titled Landscape—where one notices not only the absence of colour, but also the fully manifested form of modernist buildings, as opposed to the mere architectural fragments in Edgeland.

Chowdhary states in an email interview that she was thinking “about the variety of architectural function and form, from religious to industrial to residential. Their coexistence and the interesting juxtapositions created as cities evolve." 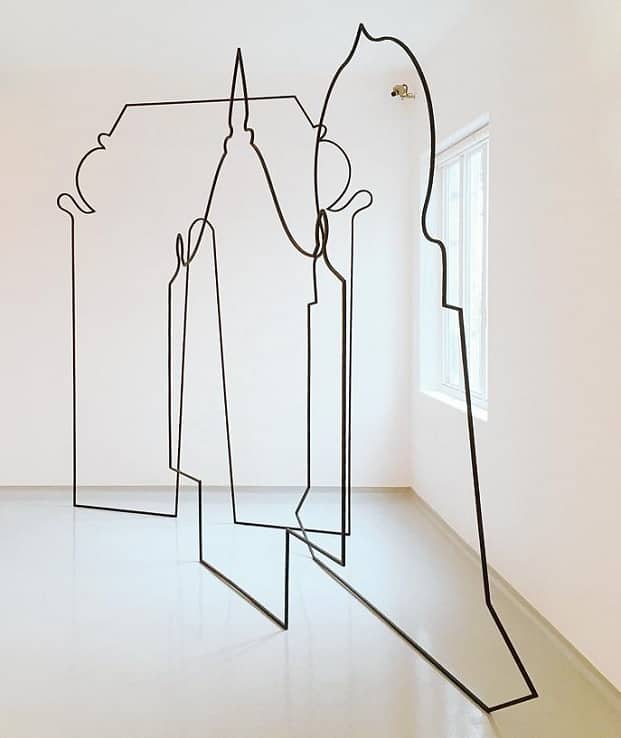 Ayesha Singh, born 1990, may be the youngest artist in the show, but her sculptural installation in wrought iron is one of the more ambitious works on display. Titled Hybrid Drawings, a single line of wrought iron is moulded into three architectural features which interact with each other and resemble a cupola, a dome and a triumphal arch. Singh states, “They are an iteration of a way in which the drawings from my imagination can be physically experienced by the viewer. The idea was to keep the drawing as a drawing, without creating new structures with too much mass, to refer to architecture through a simplified line." Almost touching the ceiling, it dwarfs and intimidates the viewer as one walks around the piece, bringing home the awareness, in a microcosmic way, of the ability of built form to influence us all.