A border exists because it can be crossed

Poets lay claim to belonging through the act of becoming an outsider. Lounge invited Meena Kandasamy to curate three original poems that reflect on a nation that's been 'free' for 70 years

(We are not the subjects of anyone

We do not fear the god of death

We shall not suffer, were we to end in hell

We’ve no deception, we’ve no illusions)

At the height of competing religiosities, these lines were sung by Shaivite Bhakti poet Thirunavukkarasar (Appar) when he was sought to be arrested and produced in the court of Mahendravarman, the Jain Pallava emperor who eventually converted to Shaivism. To me, these lines have transcended the seventh century Tamil milieu in which they were first uttered. These lines lie beyond religious affiliations, they speak as a manifesto of every poet, they are a call for a rejection of state and subjecthood. Today, when we mark 70 years of our freedom from the yoke of colonialism, when we witness the celebrations that mark Independence Day, these lines are a timely reminder that as individuals, our lives are not meant to be merely contained within the convenient and controllable categorizations of citizens and subjects.

Today, when we march under the banners of “Not In My Name", making a widespread appeal to stop the hate that suffocates us, these lines are slogans to shout at the state machinery and systems of oppression. As poets, these words try to tell us that it is essential we step away from the framework of being the ruled and the governed, that we make no bones about our defiance and outrageous disobedience, that we be ready to pay the price for our radical transgressions, that we refuse to be beholden by fear. A poet lays claim to belonging through the act of becoming an outsider. To a poet, the notional idea of the border exists beyond nationalism; a border exists precisely because it can be crossed.

At a celebratory moment such as this, a poet is the reality check. She is the one who will be the truth-seeker, truth-speaker, troublemaker. So we asked three poets to critically reflect upon this historic milestone.

The first of the poets is K. Satchidanandan, with an unparalleled body of work over the last half-century, unafraid and critical—inhabiting a language, inhabiting the angst and dreams of its people. In An Old Poet’s Suicide Note, he writes, “I was born with a single chain/several chains fetter me now"—a grim reminder of the state of repression that has been imposed upon our lives. His words show how we become the undying dead, the dead who are rising with battles left to fight. He bids farewell, asserting that boundaries of mortality are porous, for the dream of a better tomorrow necessitates the promise of resurrection. ​

Karthika Nair—famed for taking on the largest of epics, Mahabharat, with subversive, feminist retellings—sagely looks upon this moment in history and writes: “At seventy, you rip and reconfigure brain/and heart, neural networks, the works, all to unchain/ this enhanced, singular self that claims devotion,/ unquestioned, from units of every persuasion,/ tissue and cell and organ system." In capturing the tumult we carry within ourselves, she elegantly picks up the trope of the nation embodied, the nation as viscera—ageing, vulnerable, unforgiving—and all the same, capable of healing.

At a celebratory moment such as this, a poet is the reality check. She is the one who will be the truth-seeker, truth-speaker, troublemaker.-

What have we become? A cannibal country that eats up its own children, lynches its minorities and its marginalized and criminalizes most forms of dissent. Sharankumar Limbale, whose work embodies individual rage and collective rebellion, packs a punch to the system’s gut when he questions: “Schools, colleges, houses will become prisons/ And at last—how can you be sure—that you will not/ Turn into a prison?"

Even in the India of today, caste is a constant state of being divided, a constant imprisonment—and breaching that prison cannot come to pass without the follow-up penalty. It is a crossing that causes honour killings and massacres, a crossing that is so obsessively guarded for fear of coming to pass that young women and men must pledge away their practice of freedom in order to inhabit a normal everyday. In the work of Limbale, the tension against caste, state and society is constant. Reflections on transgression—stepping across lines of control—are not based on a symbolic event alone, but they are everyday struggles, minute-to-minute negotiations.

When the state tries to reduce us to numbers—you are a number; a unique number; a number is all you are and who you are; without a number, you do not exist—we must retreat into poetry to halt the cold, mechanical process of dehumanization. Perhaps, that way, we will reclaim our “rage and pride, red-hot and cold-white", as Nair writes.

As we mark 70 years of independence, we must claim our right to step across lines and realize that some inviolable lines are being breached.

The strength to resist this incursion and control lies at the heart of the practice of freedom. These are poets who have not merely stepped across the line, but ones who have erased borders and reshaped the landscape of the respective languages in which they write. These are poets who have taught me, these are poets whose work will continue to impart life lessons. In their own distinct manner, each of them pulls down and demolishes, dissects and unpacks, and interrogates the idea of independence. 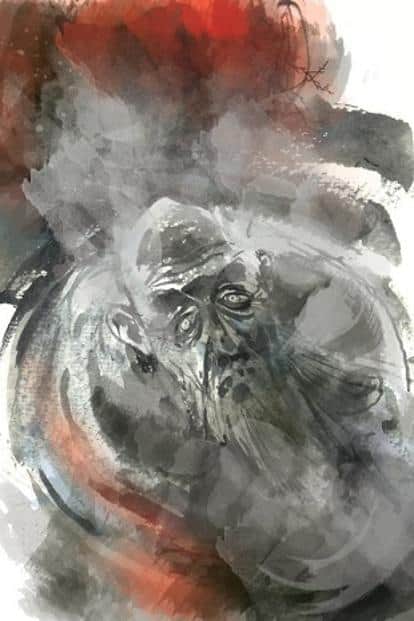 Walking in the dark

Teachers who speak ceaselessly about light,

how far above is it?

Prophets who taught me about revolution,

how remote is it?

My legs have grown weary

My heart beats are slow

who just died of the world.

I searched in all the books,

for a word of truth

I dug every drought

for a drop of tear

I can no more speak of earth’s beauty

sitting on a sinking land.

Cannot speak of trees sitting inside a storm

Cannot speak of beginnings sitting inside a deluge

I had a country when I was born

Now I am a refugee

I was born with a single chain;

I raised my hands to scream against injustice

I said ‘don’t’ to the vile hunter.

My life is a collection of vain deeds.

This is the first poem I write

without corrections and revisions

This is the first song of the night

I sing without faltering.

The spring of my dreams has gone dry

I draw the curtains on this shadow play,

Farewell. Call me when the world changes.

I shall come back if the hungry worms

and the obstructing angels permit me.

K. Satchidanandan is a poet, essayist and literary critic writing in Malayalam. He lives in Delhi and his latest collection of poetry is The Missing Rib. He has translated this poem himself.

At seventy—mere ripple in the ocean, as

they sing, of human history—your skin now has the sheen of a battle just begun, or living

a sheath impervious to tenderness and touch,

fresh breeze and clement rain, or warm earth, any such

element that could thwart the route—return, you insist—

chest a hypertrophied vault, limbs chiselled for a fight,

predisposed to setting your own lustrous head of hair

alight, somewhat vile and futile a form of warfare

even against vermin. Eyes and ears—on constant red

alert—appear within thighs and breasts and knees, forehead

and groin. But most ganglions, you decide, are suspect;

so, severed or suppressed, lest their signals misdirect.

At seventy, you rip and reconfigure brain

and heart, neural networks, the works, all to unchain

this enhanced, singular self that claims devotion,

unquestioned, from units of every persuasion,

worth gets reassessed; lobes frontal and temporal—

At seventy, your arteries throb in full riptide,

as do the veins: both suffused with plasma, rage and pride,

red-hot and cold-white. Yet, blood too bountiful will seep

into marrow and tendon, skin and membrane, then sweep

Fresh rules, too, must apply on feelings: doubt a dire fault,

so are hunger and humour and thirst; triumph’s the chrism,

At seventy, you enjoy the ripple effect

of high, mutant power coursing through each perfect

cell, the scent of their allegiance, the deference

of peers. The losses, you scoff, are false reference,

or three or ten. You love the hashtags you trigger,

At seventy, there’s not a ripple of laughter nor

space for tears or regret or guilt. Compassion’s a chore,

and glory the sole touchstone you cherish. We’re strangers

now: you can’t recall me, and a dog in the manger

I’d be named if you did. Still, a wish on a birthday

is custom, and mine, although a chimera this day,

shall chime through time: be human, plural, or better yet,

an atoll, with reefs more varied than the alphabet.

Karthika Nair is a Paris-based poet and author of several “dance scenarios" and books, including the award-winning Until The Lions: Echoes From The Mahabharata. Why has this military seized me,

placed me under house arrest?

Can violent tanks arrest my breath?

Can these missiles threaten me?

I walk, an assembly gathers, rumours

of riot spread across the city.

Where will you keep the ready guns?

Who says I can only last a riot?

by crushing me? What is sovereignty?

National integrity? You taught me lessons

on national integration—paying me compensation

for plucking my eyes, for boycotting me,

for raping us, for burning my locality,

for murdering and disgracing me.

Have you counted the ways

you have devised to bully me?

Did the courts help you calculate?

Beyond how many prison walls

and uncrossable seas do you stay

Demolish the walls of homes,

I will not be accommodated in any prison,

Turn into a prison?

Do you want to make so many prisons

when you can, instead, simply accept me

as a human being?

Sharankumar Limbale is a Pune-based Dalit poet, critic and author who has written more than 45 books in Marathi, including The Outcast (Akkarmashi) and Towards An Aesthetic Of Dalit Literature. This poem has been translated by Mukta Mahajan.

Meena Kandasamy is a poet and writer based in London. Her latest novel is When I Hit You: Or, the Portrait of the Writer As A Young Wife.