6 apps to help you keep track of Wimbledon matches

Apps and offline locations that can come in handy during The Championships, Wimbledon

A lot of time, money and energy has gone into making this official app the best way to stay up-to-date with the state of play. The app covers the build-up, qualifiers, and every ball hit during the fortnight. Apart from real-time scores, results and match statistics, the app has videos featuring highlights, behind-the-scenes clips, interviews, previews and classic matches. You can even modify the settings to view personalized player-related alerts and play status. It also provides regular updates on the Queue.

If you are not able to make it to the ground and, god forbid, have no way of watching The Championships on the tube, turn to the BBC iPlayer Radio. Listening to tennis action has a unique charm and Radio 5 Live covers the entire tournament, making it convenient for when you’re on the go. Apart from live commentaries, Radio 5 also presents analysis from the daily matches and player interviews.You can also tune in to the Live @ Wimbledon Radio, which will be available starting 3 July on the Wimbledon website.

Take it off court

A social networking app, this helps tennis players find someone to play with in their city. The app also connects players with local tennis services through a dedicated directory for tennis clubs and coaches. All you need to do is create a detailed profile, specify your skill level, and you’re ready to rally. 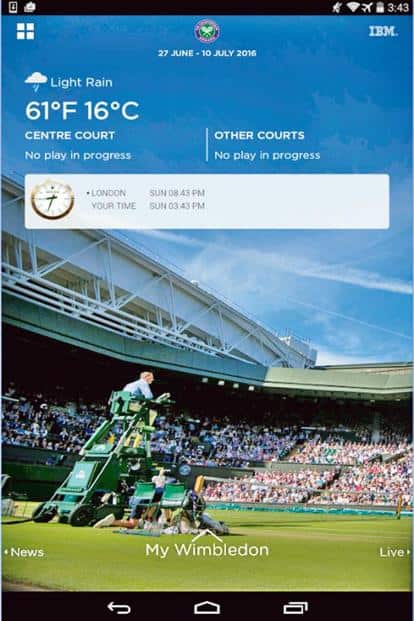 A screenshot of the official Wimbledon app

For those travelling to Wimbledon, a visit to the Museum of Wimbledon is a good way to soak in some local history. Unlike the Wimbledon Lawn Tennis Museum, which is located inside the grounds and focuses on tennis, the Museum of Wimbledon, which is run by volunteers and is open from 2.30-5pm on weekends, delves into the history of the district in south-west London that hosts The Championships. You could learn about its famous residents, look through local arts and artefacts, or pick up Wimbledon memorabilia from the Wimbledon Shop at the Lawn Tennis Museum.

The @ViewFromTheQ provides fans regular updates and information on the status of the Queue. The Twitter feed is full of helpful posts, photographs and alerts from fans lined up in the Queue for the on-day sale of tickets. Be it a plea for help finding a lost item or an update from the stewards on the token numbers that have a chance of making it to the main courts, the @ViewFromTheQ handle is a handy tool for anyone who’s in the Queue.

With one million followers and almost 2,000 posts, the official Instagram handle of The Championships is a visual treat for tennis lovers. It gives updates on players during the build-up to the tournament, shares images while it’s on, and also provides videos and photos of iconic Wimbledon moments down the years. From the Queen’s first visit to Wimbledon in 1977, when she handed the Ladies’ Singles trophy to Virginia Wade, to Andy Murray kissing the trophy after his second Wimbledon title in 2016, there’s a lot of history in there.