50 ways to reimagine the sari

Textile innovation lies at the heart of Gaurav Jai Gupta’s design studio Akaaro. The Delhi-based textile and fashion designer is known for his innovative fabrics, engineered within his studio, and contemporary silhouettes. This month, Gupta launched an ambitious new project, Granular Times, a collection of 50 saris that expertly blend materials like silk, cotton, wool and metal, with a wide range in palette, from soft pastels to dramatic golds.

At the collection launch at Mumbai’s Bungalow Eight store, textile revivalist Jaya Jaitly hosted a walkthrough highlighting the significance of studio weaving, troubles with handloom revival, and her impressions of Gupta’s collection. “I’m impressed by his experimentation and what he’s willing to do with multiple kinds of textures. The fact that he can bring together wool, silk, cotton, linen, and still bring about a cohesion—that’s valuable. Unless you innovate with textiles, you’re forever stuck in tradition," she says.

The collection (from ₹ 23,000- ₹ 45,000) will travel to Kolkata, Delhi, Bengaluru and Chennai in two months, after which Gupta will debut his Spring/Summer 2019 line in Paris, which explores India’s fascination with colours, though in a muted palette. At the launch, Gupta spoke to Lounge about the process of crafting Granular Times, and the future of the sari. Edited excerpts:

What inspired you to design such an extensive collection of 50 saris?

This has been in the making for almost two years. But it’s also a consolidation of a lot of our work. I took time to understand saris. I also saw there is a gap in the market—we’re very big on tradition, heritage, handloom revival, etc., but Akaaro as a brand is all about the future. For me, (the collection) defines what today’s India is about, what kind of visual aesthetic we are developing, without referencing any archives or libraries or Mughal designs. We’ve played with key elements of woven textiles, which are colour, scale, texture and material.

A part of the sale proceeds will be going to a project called Save The Loom, specifically for looms in Kerala that need fixing (Savetheloom.org). Being a weaver and a textiles person, I understand how important this is. Each loom costs around ₹ 40,000 to fix.

Are there any new fabric innovations in this collection?

We’ve divided the whole thing into five stories, which are the five key elements of our brand. One is engineering, so we have a series of engineered saris; then we have Akaaro masterpieces which are now becoming more archival, since weavers find them complicated to make. Then metallics that we’ve been famous for, we have taken to the next stage. Earlier we were doing only solids, now we have integrated a lot of jacquard. Then we have stripes, which is what I started my career with. And finally, all-over solids, without any pallus or borders. 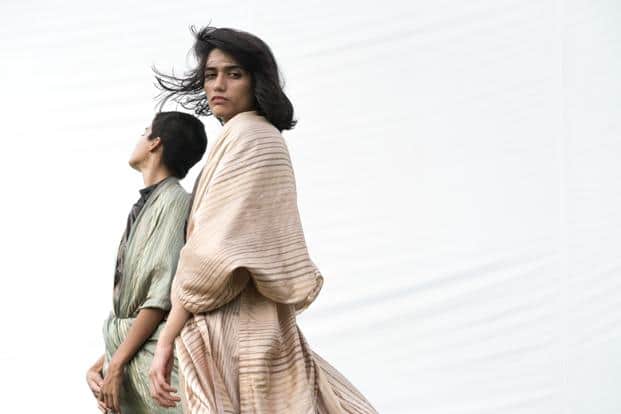 As a textile innovator, what do you imagine as the future of the sari?

One of the things I say is designers can’t save the sari, it’s the other way around. If somebody says we’re saving the sari, they’re idiots. I think 85% of India will always wear saris, so the sari is not going anywhere. But I think young people need to find it interesting, and for that we need to be honest with them. You can’t keep going to the villages and picking up stuff and selling it, you have to create stuff.

We try and experiment with sari drapes. If you look at our last five runway presentations, and this launch, we’ve tried to keep things fresh by imagining how you can drape it. But I don’t really have any agenda in terms of where the sari should go, it’s none of my business. For me it’s about textiles. It can be handloom, powerloom, anything.

Which are your favourite pieces from the collection?

In one piece we’ve used five materials in one sari, done on a basic handloom. I love that, it’s very classy. Some pieces have no border, no pallu, so when you put it on, it feels very different. That’s what I think is modern about it. (As a designer) you have to edit and remove the excess. Textile designers often use stripes but we’ve played with it in terms of colours, within zari. And the pieces are very light, almost like paper.