Even the thick layer of smog in Delhi could do little to deter the spirits of over 5,000 participants who walked for LGBTQ rights and celebrated the historic 10th edition of the Delhi Queer Pride on Sunday. Since its inception in 2008, where some hundreds gathered in central Delhi to celebrate the first public Pride parade, the community-funded march has grown to become a strong movement that primarily addresses Section 377 of the Indian Penal Code (which criminalizes homosexuality). 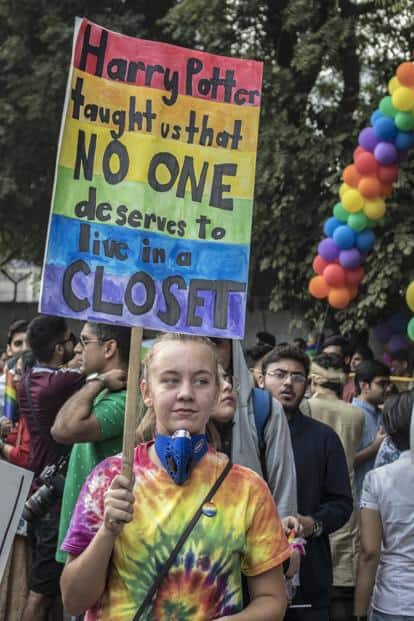 The tenth edition of the Delhi Queer Pride saw national and international participants walking with colourful posters that support the LGBTQIA movement in India, especially the fight against Section 377, which criminalized homosexuality. Photo: Paroma Mukherjee

A glaring and welcome change over the years of the Pride being celebrated is the decline in the number of people wearing masks to protect their identities.

E-rickshaws were organized by the Delhi Queer Pride committee for participants, especially those with special needs and older people. Photo: Paroma Mukherjee

This year, owing to the ban on all protests at Jantar Mantar, where the Pride march used to end, the organizing committee sought permission from the Delhi Police to end the march at Parliament Street instead.

The march is easily the city’s most colourful public parade and participants attended with children, parents, partners, friends and pets. A placard-making picnic was held a month earlier as an initiative to invite people to write/illustrate their thoughts on posters, which would then be carried on the day of the walk. “One, two, three, four. Break open that closet door. Five, six, seven, eight. Stop your folks from assuming you’re straight," shouted a group of young students walking together. 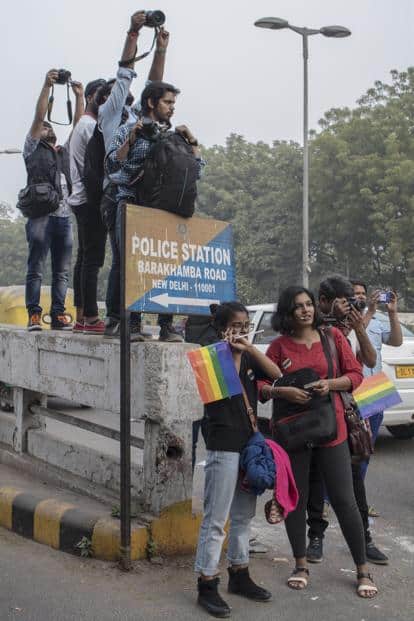 Photographers perched atop the divider at the junction of Barakhamba and Tolstoy Marg, from where the Pride march began on Sunday. Photo: Paroma Mukherjee

This year, the Pride rainbow flag was a record 15 metres long, and people danced their way to the end under it with dholak walas maintaining the rhythm throughout. Colourful saris, feathered head accessories and balloons were a breather from the dullness of the continuing smog and everyone, from commuters on DTC buses to the Delhi police personnel on duty, was part of a truly public takeover of the streets.

Over the years, the Delhi Queer Pride has maintained independent operations, relying only on community funding and rejecting any kind of corporate endorsement or sponsorship, which makes this unique collective very focused on equal rights, privacy and freedom, spearheaded by community members and for community members. Their unflinching support to Dalit rights, disability rights and the feminist movement has been as much a part of the agenda as the rights of the LGBTQIA community itself.

The fight to repealing Section 377 is a long road ahead, but the confidence with which participants walked on Sunday marks the end of their so-called “invisibility" in Indian society. “We’re here, and we’re queer," they shouted. And, as they say, the rest is history.