As the internet gets borders of its own, countries are scrambling for more online rights for their own citizens 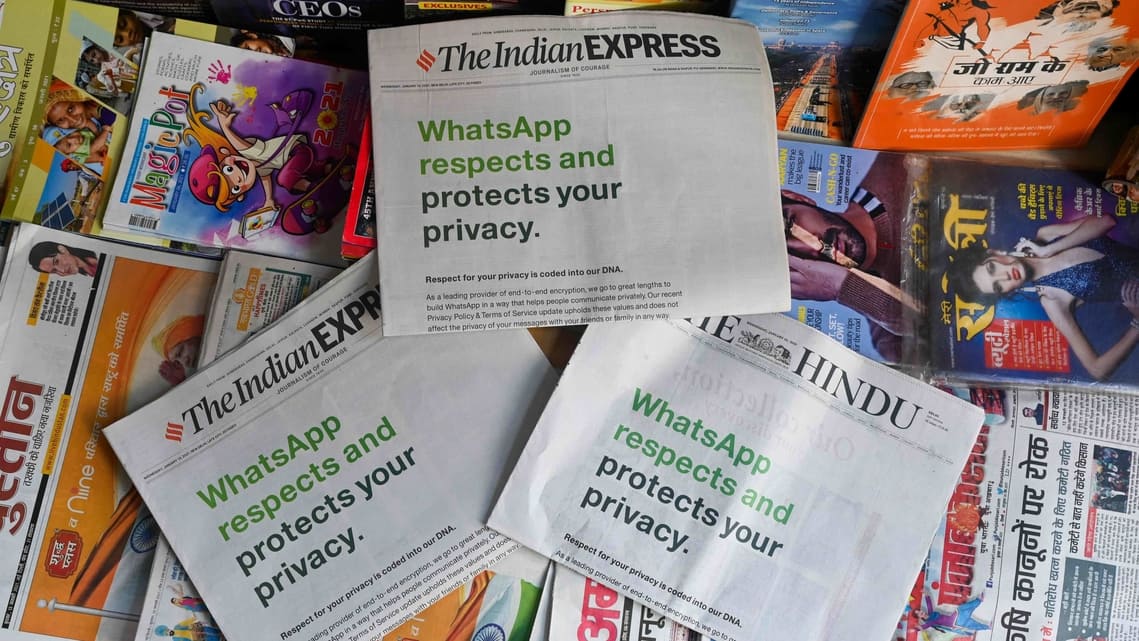 An advertisement from WhatsApp is seen in a newspaper at a stall in New Delhi on January 13, 2021. (Photo by Sajjad HUSSAIN / AFP) (AFP)

WhatsApp’s new privacy policy popped on my screen a lazy morning a couple of weeks ago, spreading its black-on-white legalese. Unlike most people who groan at the idea of reading clauses when all they want to do is scroll through good morning messages, I was filled with a sense of joy and determined purpose.

The new WhatsApp policy was a perfect morning coffee read. Dry legal language tuned into a friendly voice made legalese accessible, and told you how WhatsApp had to, for your own good, “receive or collect some information to operate, provide, improve, understand, customize, support, and market” their services. The way corporate lawyers use the English language to confound, hide and protect their company’s interests is a lesson in the art of writing.

The policy’s friendly voice announced that WhatsApp would share your user information (name, email, phone number, IP address, device settings) with Facebook and its group of companies and reminded you that it was all so you could interact with businesses better. I shrugged. The company had to make its money. No one could offer you an encrypted chat platform for free for long.

What struck me was that WhatsApp had come up with two policies—two different legal contracts for two regions of the world. One for European Union (EU) citizens and the other for non-EU ones. The two policies clearly pointed to the direction in which internet companies have been moving for the past few years, tailoring policies to reflect the boundaries of countries they operate in.

For citizens of the EU and Ireland, WhatsApp’s privacy policy gives them more control of their data. The contract that Indians and the rest of the world sign with WhatsApp LLC is legally based in the US, with special data control privileges for citizens of US and Canada. If you’re from the ‘rest of the world’—as India is with about 150 other countries—you have no legal jurisdiction over your data as a user of the service in your country.

Political affiliations and origin of the country also reflect in policy. For example, WhatsApp’s new policy states that the app will not be available to countries with US-sanctions. I checked with my Iranian friends and a lot of US services, including Apple’s iTunes, are not available to them.

In the 1980s, when the internet emerged, it was a network of decentralised computers in different universities across countries. By the 1990s, with Tim Berner Lee’s World Wide Web, any node across this network, could access any information. As storage capacity and data access speeds increased, this was quickly taken over mostly US-based companies, offering free products to users.

When social networks first began more than 20 years ago, there was a sense of freedom. Everyone with internet access and who could communicate in Internet languages, anywhere in the world, could get online and share their stories on Facebook and Twitter, interact and voice their lived experiences. The Arab Spring protests in the 2010s was celebrated as the high point of this new online, seamless freedom.

Internet companies quickly advocated this idea of a global, frameless, free online space which had no visa requirement or restrictions, a truly democratic space to operate in. The idea that a company created to maximise profit for its shareholders can make a democratic system for interaction is in itself perhaps ludicrous. However, the soma of this dream was drunk by not only users but also by Silicon Valley investors and founders, who insisted they could change the world without ever leaving their little white echo chambers.

We, as individuals, put our minds and energies into deriving social and political meaning through social platforms which are inherently commercial in nature. We conveniently forgot that the email we sent, or the video we made, was data bytes sent to a server, sitting in a geographical location, run on infrastructure facilitated and owned by a company whose sole aim was profit for its stakeholders.

In the last five years, the for-profit algorithms have played havoc with our political and personal lives. The world has seen tech giants taking more control, offering us convenience and constant communication, but also selective bubbles that disconnect us, restrain us in echo chambers of xenophobia, anger and fear, increasing our desire for walls and weapons.

The global internet, if it was ever alive, is now dead. Having experienced the downfall of the idea of the freedom that internet provides, citizens of the world now want the powers of the tech companies curtailed. However, privacy and power come to select people, as countries scramble for more rights for their own citizens.

As the pandemic brings borders back into fashion and citizens look inwards, the internet’s future, ruled by for-profit companies, will continue to be chopped up by regulators, governments and laws in order to curtail the power tech companies have begun to have on our lives. We now await our own piece of this online land-grabbing—the Personal Data Protection Bill, which still hangs in Parliamentary indecision.

Shweta Taneja is a Bengaluru-based author who ruminates on intersections of science, technology, gender, environment and society.