Milkha Singh, a hero worth having 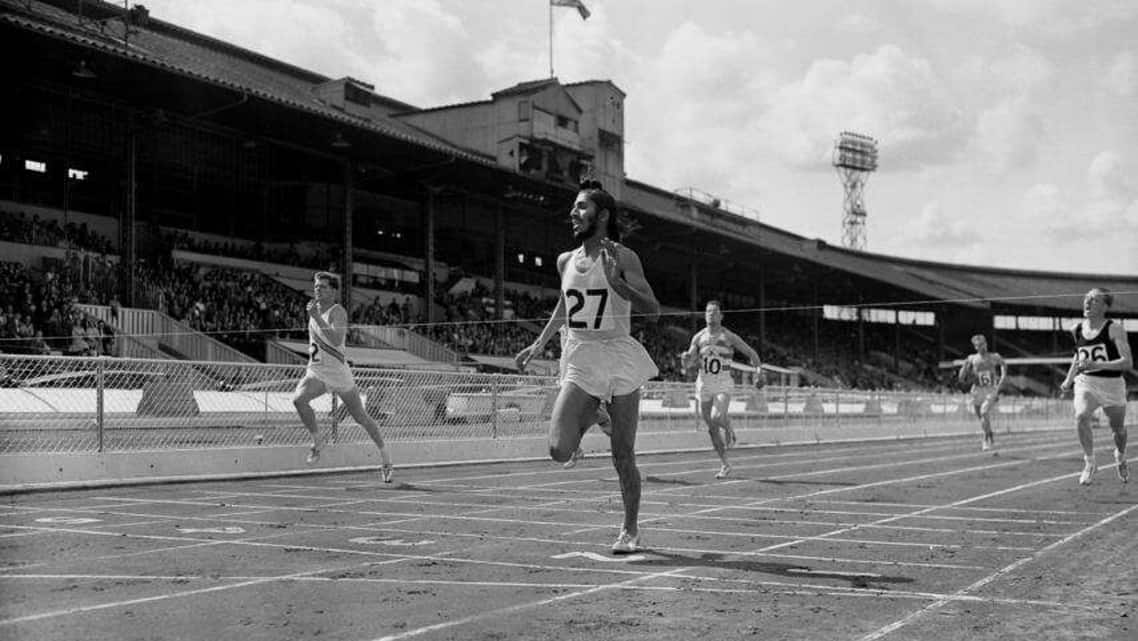 Milkha Singh mattered to so many of us because he was an athlete from another time. (Getty Images)

Time is like a slow windshield wiper to the memory, but this much remains from a day long ago. His handshake and his voice, both the same, rough and strong. Life coursed through him like a river you couldn’t even try and dam. This was the 1990s, he was in his mid-60s, but heroes never age.

Milkha ran like a man fleeing from something. We only know this urgency through bits of film that speckle YouTube. He is electric to watch and gracious as a man. In a nearly two-minute clip of that 400m race in Rome 1960, after it’s all over, and the Indian (who has come fourth) has barely digested a race of which he will later say, “I can never forget it till I die”, the camera catches the winner, Otis Davis.

He’s an American basketballer who started running at 26 and in the clip he has his tracksuit top on and he’s filled with joy and celebrating in the infield when a smiling man enters the frame.

It is Milkha Singh. Heartbroken, hand out in congratulation.

Milkha mattered to so many of us because he was an athlete from another time. A time before cynicism took hold of sport, before provocative advertising lines which read “You don’t win silver, you lose gold” became fashionable, before all the “New India” flexing.

He wasn’t some manufactured brand but an unaffected, unadorned, hard-training, trauma-wearing, no-excuse champion. He didn’t speak like some PR-firm production but with a certain directness. He didn’t style his hair but tied it into a rough knot on his head and ran. He had no swagger but stood as straight as a sentry.

There was fire within. “Aag tha andar,” he once said.

Milkha ran his Rome race two years before I was even born but he was passed down to me by my dad and uncles. As if I had to hold that name like an heirloom. It wasn’t the only gift from 1960. Some miles from where Milkha was in Rome, Muhammad Ali was winning Olympic gold in the light-heavyweight division. A month earlier, and 1,400km away, Ramanathan Krishnan had reached his first semi-final at Wimbledon.

If you are a journalist, you cross a line and see champions from close up. You see the flaws and the normal human stains. Some of it makes you grow up; some of it clarifies the necessary distinction between great athlete and fine person; some of it is so deeply disappointing when you discover the idol, so fluent with a bat, is hollow within. But Ali, Krishnan, Milkha, these men, who were towering figures in a young mind, never reduced in size over the decades. Hardly perfect and yet authentic.

Maybe my dad got to see grainy clips of him on some Films Division bulletin but for us it was black and white photographs seen and stories heard. It was his legend passed on and jokes about “Relaxing”, it was marvel and mythology, it was the way old-timers said his name, and the weight of his nickname.

The Flying Sikh. Who, in India, ever had a better sobriquet? He must have been fast? Yes, he was. No Indian male has matched his 200m and 400m double from the 1958 Asian Games. No Indian, man or woman, has won an individual gold medal on the track at the Commonwealth Games like he did in 1958. That’s only 63 years of trying.

Also read | Abhinav Bindra: the evolution of an athlete

Still, it’s the fourth place in Rome 1960 which stays with so many of us.

Years ago in Delhi, while compiling a list of India’s greatest athletes, a senior editor at a magazine said: “Milkha Singh, he came fourth, what’s the big deal, why should we celebrate someone who didn’t even win?” You wanted to shake the idiocy out of him. You wanted to say, listen up, in a tone as patronising as you could summon. This is Milkha, OK?

This is 1960 and no Asian man has ever been in a 400m Olympic final and he’s roughly a tenth of a second from a medal. This is not some prodigy, not some scientifically-pampered talent, but a kid who goes from sleeping on railway platforms to podiums. This is hard work taken and turned into a prayer. This is a man of such desperation and humility that he goes to Charles Jenkins at the 1956 Olympics—where Jenkins wins the 400m gold—and asks for his training schedule.

You factor in all this, and the other Partition stories, and fourth is freaky. Its worth can’t be estimated. His race is ostensibly only 400m but really it’s a run through years, across borders, past tragedy and into possibility. This is a run about speed but also survival. It’s not just the place he finishes as much as the place he has come from.

The 400m result from Rome, where he took off fast and then slowed down, it hurt him and stayed with him, as if a recording of that race ran through his head often. And yet, he would talk about the race plainly and clearly, he would never flinch from it, and it gave you a measure of the man.

I can’t say I knew Milkha. Just a meeting here and an interview there. But my old colleague, V. Krishnaswamy, athletics writer and sports wanderer, who met the runner multiple times, says this when I asked why we admired him:

“He gave us belief. Simple.

“He was convinced he should have won and he could have but he was a man without a system to guide him.”

I didn’t care for Bhaag Milkha Bhaag but I am glad they made a film on him. I hope there’s a statue somewhere, a grand book coming out and stadiums with his name. He’s a man worth remembering. When I heard he was gone, I felt like perhaps you did: Something good had gone. Something vital. Something real.

I am too old for heroes now but I am glad he was one of mine.

Rohit Brijnath is an assistant sports editor at The Straits Times, Singapore, and a co-author of Abhinav Bindra’s book A Shot At History: My Obsessive Journey To Olympic Gold.