These Bengaluru artists are painting to get people walking

In the century-old Malleshwaram locality, artists are creating street murals as part of a movement for sustainable mobility 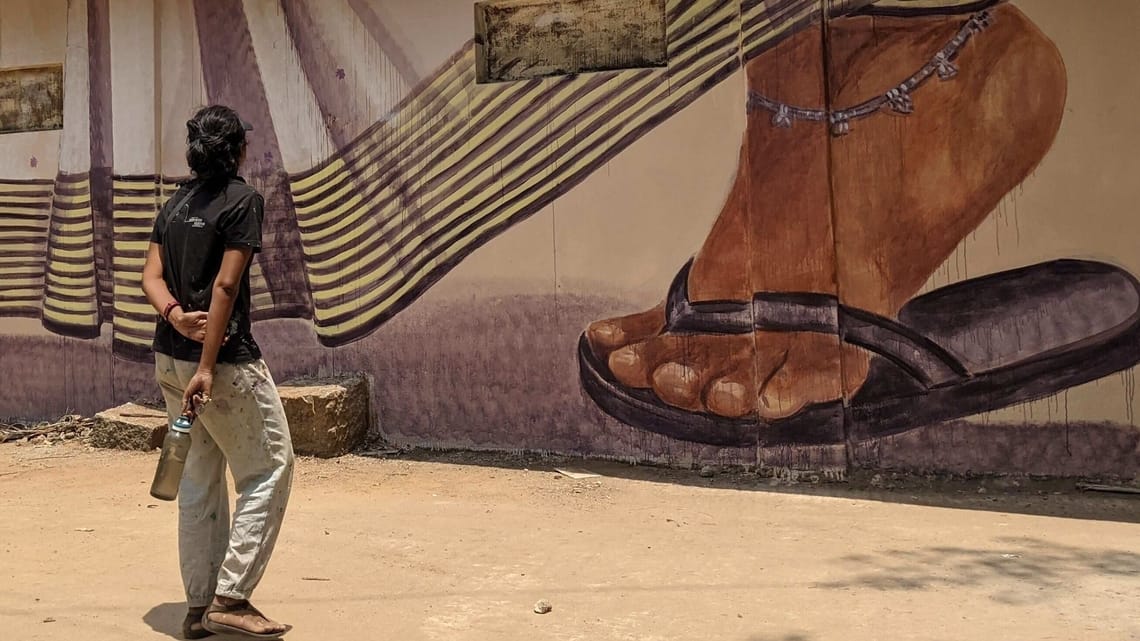 Every time he visited Bengaluru, her father would carry back home sampige flowers for her mother, recalls artist Chandana BV, who grew up in Mangaluru. “It made her smile,” says Chandana, one of the 13 artists who are part of Malleshwaram Hogona, or Let’s go to Malleshwaram, the street art project underway in this ancient locality of Bengaluru. “That memory has stuck with me.”

Her mural titled, Once upon a time, there were Sampige trees all around, captures the nostalgia, beauty and memory associated with champa (Magnolia champaca), the lemony, fragrant flowers that, in season, fill the streets and crannies of Malleshwaram with their sweet, heady aroma. “I wanted to paint something fresh, positive; something that could be an escape,” she says. The more she walked through Malleshwaram, thought about it and talked to people, “I just knew it had to be sampige.” They now bloom across faded pink walls there, reminding passersby that the flower is an intrinsic part of Malleshwaram, so much so that there is a road in the area named after it.

This mural is one of a dozen underway in the neighbourhood, all coming together to construct a complex, multi-layered, visual narrative about Malleshwaram, one that strives to be, in varying degrees, aesthetic, didactic, sensory as well as inclusionary. “The pitch was to create a narrative street where people would start walking because they want to go see the murals,” says Yash Bhandari, Creative Lead, Geechu Galu, the artists’ collective that is executing the project.

Malleshwaram Hogona is part of the broader Bengaluru Moving campaign that attempts to address the city’s traffic congestion and see a reduction in vehicular emissions by advocating for and campaigning on public transport and non-motorised transport solutions. The first phase of Bengaluru Moving, which kicked off in 2020, focused on popularising priority bus lanes in the city. But the pandemic has seen people become hesitant about public transport, says Mallika Arya, who is leading the Bengaluru Moving campaign. More people are now looking at walking and cycling around the city. “Along with our partner organisations on the ground we decided the second phase of the campaign that started in December 2020 should focus on making walking and cycling safer as well as increasing citizen participation, especially that of women in the city, in planning for more sustainable mobility solutions.,” she says.

Suchitra Deep, the founder of Malleshwaram Social, a community collective, recalls how she stumbled across the conservancy lanes of the area. Deep, an architect who lives and practices in Malleshwaram, began applying her expertise to civic initiatives in the area 10-odd years ago. “I started documenting and thinking about solutions for the kinds of problems that were cropping up,” she says, listing some—traffic, lack of mobility, parking issues and heritage loss.

She began looking closely at plans of the area, making massive printouts of them to understand the site better. That is when she noticed the narrow lanes between the main roads that showed up at that scale. She realised that they were the conservancy lanes used by manual scavengers when Malleshwaram came up back in 1898, the meticulous planning of the suburb a response to a plague outbreak that had ravaged the city centre. “I thought it would be great to repurpose them as walking lanes,” says Deep, adding that nothing happened, for a while, after that initial survey.

Last year, however, the Malleshwaram Urban Living Lab (M-ULL)—a collaboration between Malleshwaram Social and Sensing Local, a Bengaluru-based do-tank focused on the environment and public health—won a grant under the Sustainable Urban Mobility Accord (SuMA), offered by the Directorate of Urban Land Transport (DULT). An endowment of around ₹50 lakh was given to neighbourhoods that wanted to do something in sustainable mobility, explains Sobia Rafiq, the co-founder of Sensing Local. “The proposal that we submitted was to do with walking,” she adds.

Walkable Malleshwaram, kicked off earlier this year, also brought on board the Bengaluru Moving team as campaign partners “since the agenda for both SuMA and Bengaluru Moving is the same: pushing for sustainable mobility,” adds Rafiq. And reviving the erstwhile conservancy lanes of Malleshwaram is one step in that direction; two pilot routes have already been chosen after a walking audit. “The idea is to create a network of pedestrian pathways,” explains Deep, adding that the conservancy lanes, which run through the entire area, were a big part of this plan.

Anpu Varkey’s mural titled Within her stride appears to be an almost direct response to the raison d’etre of Walkable Malleshwaram. It consists of a pair of slipper-clad feet, peeking from beneath a saree and adorned with anklets, treading purposefully onward, a powerful portrayal of how simply striding through a space can reclaim it. “The foot was always in my head,” says Varkey, one of the seniormost artists involved in the project, adding that it was symbolic of the act of commuting from one place to the next.

Street art across the world, believes Arya, has played an essential role in making a place more friendly and accessible. “It increases ownership,” she says, adding that creating a mini art district in Malleshwaram was likely to make people more comfortable about stepping out, exploring and exploring the area.

It also helps deepen a place’s identity, becoming an outward manifestation of the built environment. The artists, says Arya, spent considerable time understanding the space and the community that inhabited it and tried to make the art as relevant to Malleshwaram as possible. Like Chandana’s mural, many paintings draw inspiration from the culture, ethos, biodiversity and history of Malleshwaram. “Most of these have something that stands out and represents Malleshwaram,” agrees Gaurav Srinivas, who lives in Malleshwaram and volunteered to help the artists when the painting was underway.

Spandana Vella’s Malleshwaram’s Sparrows, for instance, is a nod to the fast-dwindling sparrow population of Malleshwaram, while Enoch Ebenezer’s Kaapi Kudithiya, depicting a grandmother flipping filter coffee, captures the area’s love for the beverage. Then there Amitabh Kumar’s Putting the Mull in Malleshwaram, whose work—a response to the play of light on the wall he was working on—uses colours and lines to create a sense of space. “I wanted to create a graphic atmosphere that is responding to a quiet, lost corner, within a quiet, lost corner,” he says, “a little island within the Malleshwaram island.”

Another mural—this one by artist Parameshwar Waran—takes its name from its subject: Narayanamma, a pourakarmika or civic worker who maintains the streets of Malleshwaram. “In a way, the pourakarmika is the owner of the street; she makes sure it is clean,” says Bhandari, pointing out that recognising the work that enables a passerby to have a great experience is essential, especially in a project that focuses on pedestrianising a place.

Due to a rise in covid cases in Karnataka and a few artists testing positive, the painting has come to a standstill. However, they intend to continue once things get better, catalysing the process of making Malleshwaram more pedestrian-friendly. “As artists, we can work together to create a design for you and tell a story which changes the narrative of the space and how you look at it,” points out Bhandari, adding that the community is the most significant stakeholder in projects such as this one. “We are working hand-in-hand with you.”

Also Read: Why a beer garden opened in the pandemic