Five years on from the historic Paris Agreement on climate change, India needs to work strategically towards a low-carbon future 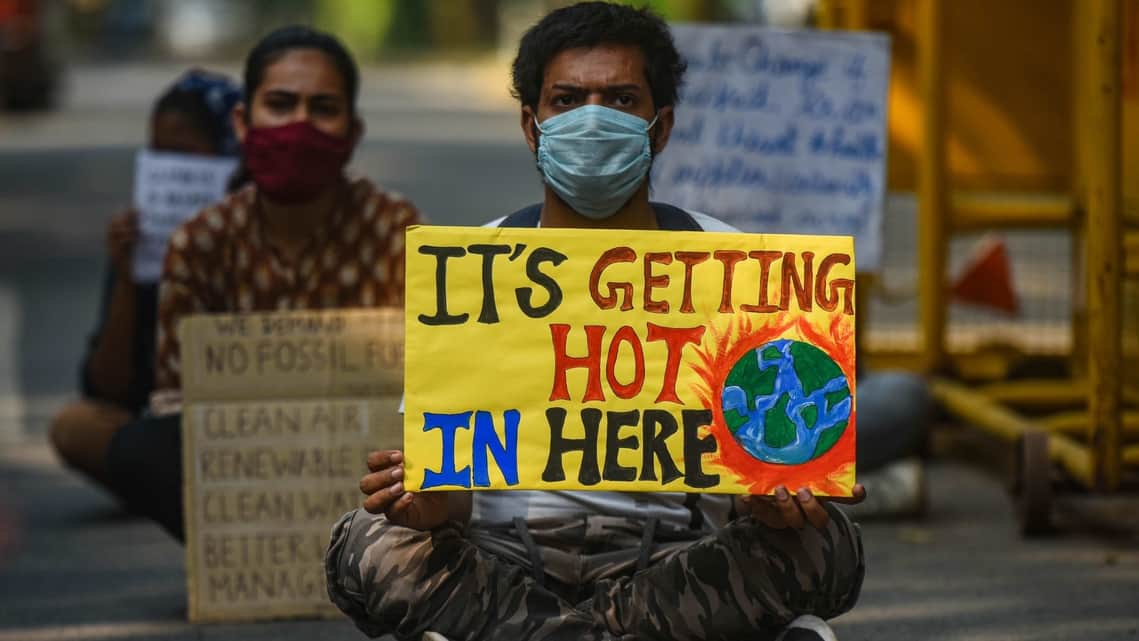 India needs to realise we are living in a “new normal” of climate risks and formulate policy measures accordingly. (Photo: Amal KS/Hindustan Times)

It’s hard to get more than a handful of nations to agree on anything most of the time. What makes the Paris Agreement of 2015 so special is that 196 nations managed to reach a consensus to act against an existential threat that faces the whole planet: climate change. 12 December marks exactly five years since that landmark moment, and with the impact of climate change making itself felt with every passing year, the Paris Agreement is more important than ever before. When the agreement was adopted in 2015, after two weeks of hectic negotiations where every comma was pored over, there were scenes of unreserved jubilation in Paris, with international delegates hugging, some even crying. After decades of wrangling, the world’s governments had come to a legally binding target to limit global temperature rise to 2 degrees Celsius above pre-industrial levels by 2100, with an aspiration to keep it below 1.5 degrees Celsius.

In many ways, the Paris Agreement seemed miraculous at the time, a masterclass in international consensus building and the power of diplomacy. The UN Framework Convention on Climate Change (UNFCCC), set up in 1992 to tackle global warming, had clearly learnt its lessons from the failure of the Kyoto Protocol (1997). This earlier exercise in securing international participation to halt global emissions expired in 2012 due to a variety of reasons, but primarily due to the fact that the US never ratified it, and Canada withdrew in 2011. The Paris Agreement was an exercise in overcoming years of international distrust, especially for legally-binding emission reduction targets for countries. Instead, under the 2015 Agreement, countries set their own non-binding national plans—called nationally determined contributions, or NDCs—to cut emissions (for wealthier, industrialised nations) or to curb them (for developing countries). The agreement also worked in a ratchet mechanism where every country would submit fresh NDCs every five years, bringing them closer to the Paris target.

Although not explicitly stated in the Paris Agreement, the latest thinking, based on scientific advice from the Intergovernmental Panel on Climate Change (IPCC), is that the world’s greenhouse gas (GHG) emissions would have to reach zero by 2050. Following this, many of the industrialised nations have set themselves a target of “net zero” emissions by mid-century. This means reducing emissions as much as possible, by way of greater renewable energy (RE), electrified transport, energy efficiency and carbon capture and storage technologies. This also includes the use of carbon sinks and carbon offset measures to balance out the remaining carbon in the atmosphere. Another key component of the agreement was the fact that developing nations would receive $100 billion (around ₹736,000 crore now) every year from public and private sources to help cut emissions and deal with climate change impacts. This is a pledge that is currently not being met.

Five years on from the Paris Agreement, there’s much to be thankful about. The first is that it hasn’t collapsed, despite the Donald Trump administration taking the US out of the agreement. And with the incoming Joe Biden administration looking to rejoin the agreement early next year, there’s renewed hope for meeting Paris targets. Recently, the UK announced that it would seek to cut emissions by 68% (compared to 1990 levels) by 2030, and earlier this year, China announced that its emissions would peak by 2030, and reach net zero by about 2060. A recent report on G20 nations stated that India is doing its “fair share” to meet the 2 degrees Celsius warming target.

However, at the end of the first five-year period, it’s clear that the majority of the global heavy-lifting to stop climate change remains to be done, and the next decade is crucial. The IPCC 1.5 special report from 2018 set 2030 as the year by when net global CO2 emissions need to fall by 45% from 2010 levels. Yet, as reports this year have pointed out, global emissions continue to increase, even in this year of pandemic and global lockdowns. Moreover, G20 countries, including India, are pouring in billions of dollars for a fossil fuel-based recovery from the economic devastation caused by the covid-19 pandemic. The World Meteorological Organisation has warned that many months in the next five years will see the world breach the 1.5-degree heating barrier. Time is clearly not on our side. So this begs the question, are we doing enough to meet the Paris climate goals? Is it time, especially for India, to take a systematic look at a low carbon future?

For climate change scholar and policy expert Navroz K. Dubash from the Centre for Policy Research, Delhi, India’s focus needs to be more strategic over the coming decade. “In the five years since Paris, the key conversation has been where India can opportunistically meet development objectives while also turning to a low-carbon future,” he says, adding that now is the time to go further. “For us to promote renewables on the one hand and promote coal on the other, may fit with the opportunistic language but it doesn’t fit with the strategic language of a low-carbon future. So we have to ask hard questions not just about limiting emissions where we can but looking at the overall picture,” he says. And this can only be achieved within a new, strong institutional structure that brings in research, analytical and modelling capabilities and helps put together a coherent, overarching picture.This would guide the Union and state governments in taking policy decisions strategically.

Economist Ulka Kelkar, who directs the climate program of World Resources Institute India (WRI-India), says that in 2015, India set itself relatively conservative targets. “We didn’t want to over-promise,” she says. Kelkar is clear that with the decreasing costs of renewable energy, India needs to invest in a flexible yet robust grid that can hold the electricity generated by renewables, and a policy framework that supports this infrastructure. Another focus area would be transport. “With transportation, whether it is passenger or freight transport, we can easily give more emphasis to public transport for passengers and low-carbon transport for freight,” says Kelkar. If the material and energy efficiency of industry improves, she says, India can cumulatively India look at reducing its emissions by around 20%. “In sectors like cement and steel, we have companies which are among the best in the world in terms of efficiency. But we also have these small businesses, the MSMEs that provide to the supply chains of these larger companies. There is a lot of potential here. If you infuse finance over there to tap into these energy-efficiency opportunities, it will help them become more competitive,” she says.

For Anjal Prakash, an IPCC author and adjunct associate professor and research director at the Indian School of Business (ISB) in Hyderabad, one of the key changes in the past five years has been a greater understanding of climate change in the general population. “People are experiencing climate change. Earlier, it was a subject discussed in conferences. But today you are seeing the effects play out every year. Look at the number and intensity of cyclones we have had in India, the heatwaves. Because of this, I think common people understand these changes much better,” he says.

In terms of India’s response to climate risks, Prakash says that despite improvements in adaptation measures like disaster response, better forecasting and RE, the country’s record has been abysmal. Be it water management, or analysing the underlying reasons for agrarian stress—both, sectors vulnerable to climate shocks—Prakash says India needs to realise we are living in a “new normal” of climate risks and formulate policy measures accordingly. “Climate resilient infrastructure is one area which is directly affected by climate extremes but we see little progress there. Mitigation is a long-term process but governments are very myopic. Political establishments don’t think beyond five-year periods. Governments need to be progressive and look at long-term impacts and mitigate accordingly,” he says.

One of the key architects of the Paris Agreement was Christiana Figueres. In her capacity as the executive secretary of the UNFCCC between 2010-16, Figueres was instrumental in leading the international negotiations that made the 2015 agreement a reality. During an international press call organised by the WRI on the agreement’s five-year anniversary on 9 December, she told Mint that the global stock-take of climate pledges by countries will become more sophisticated. “The global stock-take will be pursued by governments, aided by the UN climate change secretariat. But there is also a very interesting effort of doing an independent global stock-take. That will probably be using much more advanced technology to be able to truly quantify where the trajectory of emissions is going. So yes, I think we are using technology, especially satellite monitoring to be able to have a better sense of emissions reductions,” she said.

She added that sectors like generation of power and electrification of light vehicles are on an “exponential curve” of emissions reduction. “And at the end you will see everything that we call the ‘hard to abate’ sectors, which is shipping, steel, cement, chemicals, all of those sectors that we thought five years ago would be impossible to abate. But today we understand that they are not impossible. They are hard to abate but this is possible. And you will see those also go into that exponential curve as new technologies come on to the market.”

Much will depend on a crucial climate change summit next November at Glasgow. The COP 26 (Conference of Parties) meet was postponed by a year due to the pandemic, and countries are expected to update their NDCs by then and use the occasion to sort out issues of climate finance. On 2 December, the UN secretary general António Guterres said, “We face three imperatives in addressing the climate crisis. First, we need to achieve global carbon neutrality within the next three decades. Second, we have to align global finance behind the Paris Agreement, the world’s blueprint for climate action. And third, we must deliver a breakthrough on adaptation to protect the world and especially the most vulnerable people and countries from climate impacts.”

If the best thing about the first five years of the Paris Agreement has been a nuanced global understanding of the risks and opportunities, the next decade will decide whether the world makes or breaks the promise of this historic accord.

Follow the series with #MintClimateTracker. Click on this link to listen to the Mint Climate Change Tracker podcast hosted by Bibek Bhattacharya.