The Chitale Brothers: A savoury history

The partners of Pune’s best-known sweets shop talk about brand values, new-age adventurism, and expanding the consumer base beyond their traditional clientele 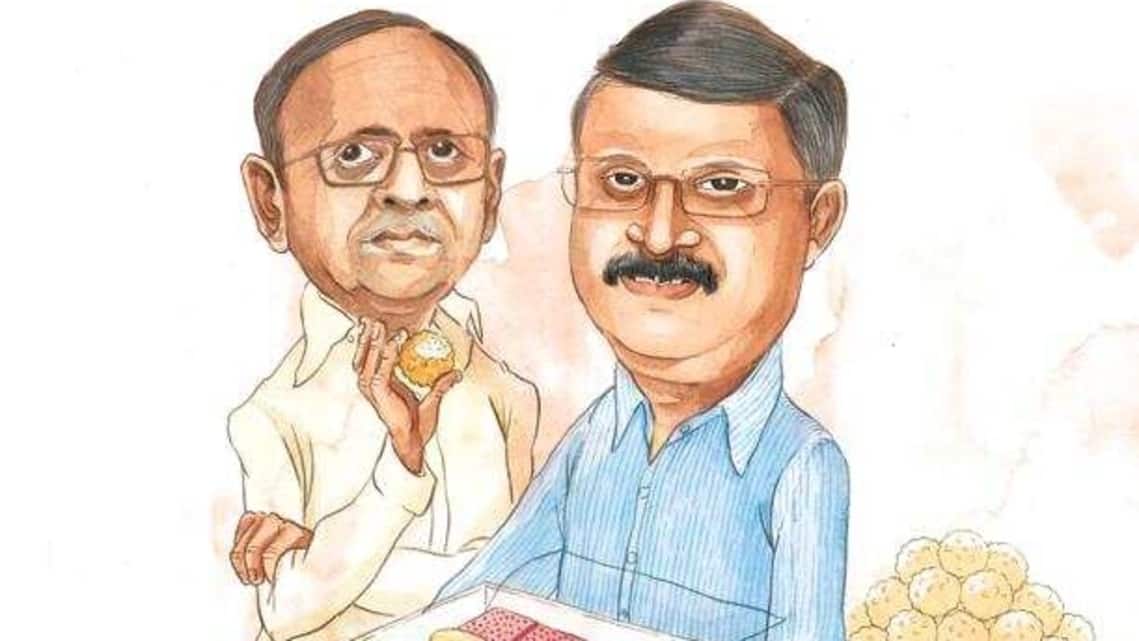 For many traditional business owners in Pune, the “customer first” approach is overrated. If you sell quality goods, they believe, people will come back for more. You don’t have to patronise them or indulge in small talk. Shopping is a transaction, not an “experience”.

The Puneri businesses’ plainspeak is best seen in this Maharashtrian city’s legacy food shops. The famous Kayani Bakery in Camp is proud it has “no other branches or outlets”. Inside the SP’s Biryani House on Tilak Road, a sign warns: “We can run out of biryani anytime. No one should get angry and argue with the management.” Until 2017, Chitale Bandhu Mithaiwale, arguably Pune’s best-known sweets shop, would down shutters from 1-4pm so the owners and staff could take a nap. When they ran out of their signature bakarwadi snack, shoppers would find a curt notice outside: “Bakarwadi sampli (finished)”.

All that is now firmly in the past. Today, the Chitales have five production units to keep up with the demand for sweets and savouries. Their packaged products are sold across India and exported to nearly a dozen countries. Starting in 1950 with a corner shop in Sadashiv Peth, the family business, now run by the fourth generation of Chitale bandhu (brothers), averages an annual turnover of ₹200 crore. And in the process, it has become an essential part of Pune’s culinary experience.

The evolution of their business is in step with their city’s. Once a sleepy town best known for its educational institutes and vibrant culture, Pune is growing rapidly into a cosmopolitan industrial and commercial hub. Chitale’s strong suit used to be catering to its traditional customer base with a few dozen Marathi sweets and snacks. In recent years, its range has expanded to 225 products with diverse culinary inflections. Their best-seller mango burfi and pista shrikhand now share space with cranberry soan papdi and cornflakes chivda.

When it comes to media interactions, Kedar and Indraneel, the younger generation, take the lead. But I was curious about how the old guard is adapting to the rapid changes in business. Brothers Madhav (74) and Shrikrishna (71) are senior partners in the firm, along with their cousin Govind Chitale (58). While Madhav has stepped back, the other two continue to be an active part of the business. When I proposed the interview, Indraneel suggested I meet them in person. “They aren’t too comfortable with video calls.”

Minutes into our meeting, though, I realised it would take far more than face-time to get them to open up. Like their business, Shrikrishna and Govind are dyed-in-the-wool Punerkars: modestly dressed, a no-nonsense attitude and to-the-point answers. We met in their sterile, brightly lit boardroom, wearing masks throughout our two-hour discussion. The two Chitales, dressed in loose, untucked cotton shirts, were accompanied by a member of the marketing team.

He began by prepping them for the interview. It was necessary for the “futuristic approach” the brand now wants to adopt, he told them. “When people read it, they will feel that this is also a big player in the market... not as a local mithai shop.”

The Chitales have big dreams today. But they had humble beginnings.

They used to be dairy farmers in Sangli, a city 230km south of Pune. In the 1950s, Shrikrishna’s father, Raghunath, and his brother, Rajabhau, moved to Pune to start a dairy and sweets shop. It was a small business; a 250 sq. ft shop they had rented to sell khoya sweets and traditional Marathi and Gujarati snacks like chivda, gathiya and dhokla. The women in the family had the final word on the Marathi recipes. While they had employed cooks, the idea was to make the mass-produced as homely as possible. “We focused on quality,” says Govind. “Make the best ones and people would pay for it.”

With time, the Chitales built up a name and goodwill. Customers would flock to them around festivals: for ukdiche modak around Ganesh Chaturthi, karanji and besan ladu around Diwali. But demand would often exceed supply. India’s rationing system until the 1970s didn’t help. “At the time, commercial sugar consumption was controlled,” says Shrikrishna. “So we would find hacks like using limlet goli (sugar candies) or buying khandsari (unrefined raw sugar) and purifying it.”

As business picked up, the family patriarch, B.G. Chitale—Raghunath and Rajabhau’s father—set some ground rules. The brothers in Pune would source all dairy needs from the Sangli branch of the family. To ensure family bonds didn’t fray, he asked the brothers to live separately. “Until the 1990s, we had only one car (in Pune). We would use it together. Whoever needed it, took it,” says Shrikrishna.

In the meantime, the Sangli-based Chitales had started ventures in dairy and food processing. Today, the brothers say the five companies in the Chitale Group have an annual turnover of ₹ 1,000 crore.

The first major breakthrough came in 1976. “Around then, my father had gone to Gujarat. He ate bakarwadi there and liked it,” recalls Shrikrishna. “When he returned, he had a few bakarwadis with him and a cook who knew how to make it.” They modified the spice composition to suit Maharashtrian tastes: going easy on the sweet, removing the fennel seeds, adding zing and frying till crunchy.

It was an instant hit. As demand spiked, Chitale opened its first franchise in Pune, in the 1980s. In the 1990s, it began mechanised production of bakarwadi. In the early 2000s, Kedar, a commerce graduate, joined the business. Indraneel, an engineer, joined a few years later.

Soon, the company began focusing on exports and building a robust distribution and customer outreach system. All these years, Chitale’s had relied on word-of-mouth. In a first, it hired professionals in 2017 to devise a marketing campaign. Their tag line: “Natyatla godwa japto aamhi—We keep your relationships sweet”.

Chitale’s success has largely been organic, not strategic. “We all wanted to grow,” says Shrikrishna. “How to do it was different. We never had a target that we should make it a ₹500 crore business or so. Instead, we did it by kilogrammes (of goods sold).” On average, they have seen 10-20% annual growth. “But the next generation is faster than us,” says Govind. “They have different views on growth patterns. They have modern machinery available to them and they use it well.”

Perhaps Chitale’s could have been a far bigger brand than it is. Take Haldiram’s, which set up its first sweet-and-savoury shop in Nagpur in 1970, well after Chitale. Both are family businesses. But by 2014, Haldiram’s annual revenue stood at ₹3,500 crore. It has restaurants in Nagpur and Delhi; its products crowd snack-racks everywhere. Since March 2020, Haldiram’s has opened 20 outlets in Pune and plans to open a chain of restaurants. Chitale averages one new outlet a year.

Growing competition on their home turf doesn’t faze them, says Shrikrishna. “Everyone has their own customer. You can go to Vaishali (a popular restaurant in Pune) one day, you can go to some other.... We will need to do something new but we don’t feel threatened.”

Will “something new” involve going beyond sweets, namkeen and confectionery?

Expanding to other sectors?

“Lots of people ask me, ‘Why didn’t you become a builder?’” says Shrikrishna. “I tell them, ‘What we don’t understand, we won’t do.’”

It seems to confirm the stereotype that Marathi businesses are risk-averse, I suggest. “Yes, true,” says Shrikrishna. “The fourth generation wants to do it,” Govind chips in, “but with calculated risks.”

“(Doing) business is about values,” says Shrikrishna. “Had we wanted, we could start selling alcohol also. But is it aligning with our brand values?”

The primary concern has always been brand integrity, they explain. It’s why they didn’t open too many stores or expand beyond their domain. “I have 10 friends who are builders. Why don’t I (expand) and do it too? Because tikde don number chach paisa jasta aahe (there’s a lot of black money there). That’s the simple and straight answer.”

This value system paid off when Prime Minister Narendra Modi announced the demonetisation decision in 2016, enforcing it at a few hours’ notice. “Despite running a cash-rich business, we were among the happiest people,” says Govind. “All our money was in the banks so we had no problems sleeping that night.”

Chitale’s has found itself in a spot on a couple of occasions in recent years, though. In late 2017, workers at one production unit struck work for higher wages. The strike lasted a few weeks, enough to dim the halo the Chitales like to maintain around their way of doing business.

The duo isn’t keen on discussing such setbacks. “It’s all part of business,” says Shrikrishna. Their marketing representative tries to interject, “These were rumours spread by...,” but Shrikrishna interrupts him. “These aren’t (rumours). There was a strike.” “But that was only one unit,” adds Govind.

In February 2020, they faced a state food and drug administration probe after a customer complained of a cockroach in a milk packet. “Nothing came out of it,” the duo says. And that’s that.

The Chitales, trying to stick to a moral compass during new-age adventurism, have had to accept change, though. For years, the wives of the Chitale Bandhu were relegated to the background. “If women are not at home, things would go haywire,” says Shrikrishna. “We work from 4am. Someone has to look after the family.” This is now changing. Govind’s wife is one of the firm’s directors. Indraneel’s wife is a working professional.

Before we close, I am curious to know why they did away with the afternoon breaks. “How many hours should one work, do you think?” Shrikrishna asks, brusquely.

“I am all for work-life balance,” I say.

It seems to work. They no longer need to be physically present in stores, they explain. “But we take a 15- to 20-minute break in the afternoon,” says Govind. “And we don’t carry tiffin. Lunch is at home.” Like it has always been.

Omkar Khandekar is a Mumbai-based journalist.