On Chennai walls, art for all

From political graffiti to didactic themes on walls, a snapshot of public art projects in Chennai 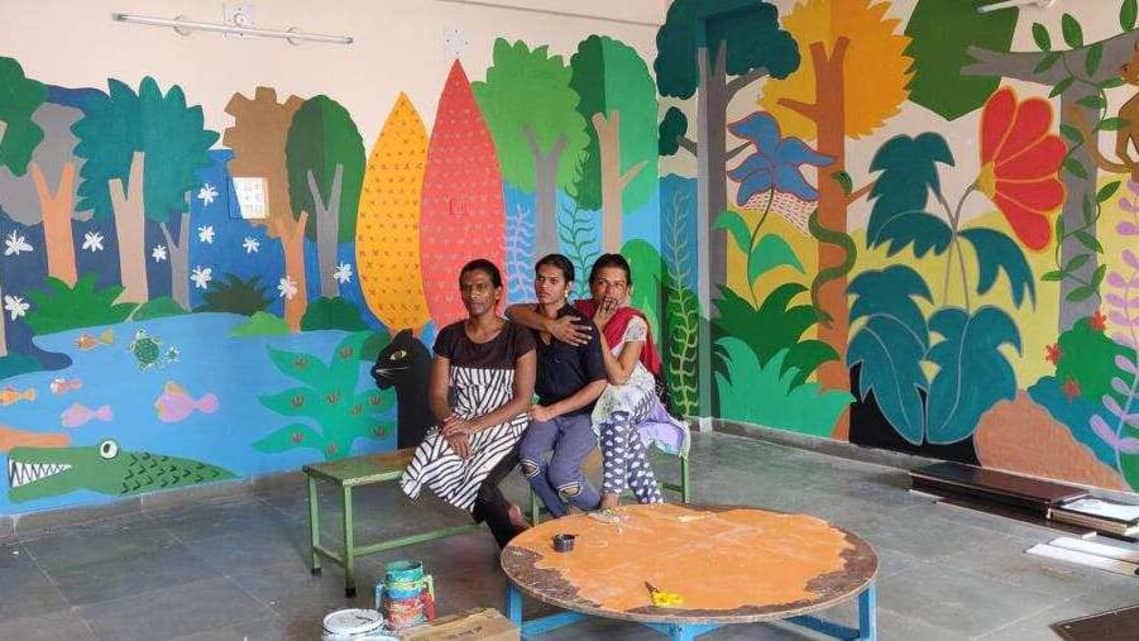 The Aravani project seeks to tell stories of the trans community through art. (Photo: )

Scaffolding cages the walls of the Indiranagar MRTS station, where a facelift—literally—is in progress. Ten black and white, photorealistic images have bloomed on the walls, each in various stages of completion. Three of the people depicted in these half-face portraits, a reproduction of photographs (some digitally altered to protect the subjects’ identity) shot by A-Kill, a graffiti artist and street photographer, are HIV-positive. But you wouldn’t know that by looking at them, says A-Kill, one of four artists involved in this enterprise—the others being Delhi-based Khatra and Chennai-based Raghupathy and Jaya. “You cannot judge a person by what they have or do not have,” he says.

The mural, We Are, is the brainchild of St+art India, a not-for-profit that works on art projects in public spaces. The project—created in association with the Tamil Nadu State AIDS Control Society (Tansacs), Tidel Park, one of Chennai's largest information technology parks, and Southern Railway, and supported by Asian Paints—is expected to be completed soon.

“Art is one area that directly reaches out to the masses,” says Deepak Jacob, project director and member secretary, Tansacs , adding that the mural reflects “global solidarity and shared responsibility”, the 2020 World AIDS Day theme. The final touch will be a red AIDS ribbon running through the façade connecting all 10 portraits, reminding us that “we are in this together”, says Giulia Ambrogi, co-founder of St+art.

We Are is the latest addition to a series of contemporary public art projects that have mushroomed across the city over the last few years, many hoping to trigger change. Take, for instance, St+art’s first significant project in Chennai: the transformation of Kannagi Nagar, one of the biggest tsunami resettlement sites in Tamil Nadu, into a thriving art district, the city’s first. “I happened to see the work St+art was doing in Coimbatore and wanted to do something like that in Chennai, too,” says Alby John Varghese, regional deputy commissioner (south), Greater Chennai Corporation.

Kannagi Nagar is occupied mainly by people who lost their original homes during the 2004 tsunami or were evicted from city slums. “These are some of the most vulnerable people in Chennai,” says Ambrogi, pointing out that the upheaval resulted in raging unemployment and high crime rates. There was a stigma attached to being part of the locality, both felt and enacted, adds Varghese. “We wanted to break that stigma, reimagine the community itself,” says Ambrogi.

And they have succeeded. The murals have not just livened up the space, they have inculcated a sense of pride and community among residents. “It changed the way people from other parts of the city viewed Kannagi Nagar and how they viewed themselves,” says Varghese, adding that the initiative garnered a lot of support from the people of the neighbourhood. The camaraderie forged during the exercise even played a part in the battle against covid-19. “During this painting process, we created networks in the community; people used to come and help our artists,” he says. “Our connect in community helped in the initial stages in the pandemic. There was good compliance with masks and adherence to norms.”

BETWEEN PAST, PRESENT AND FUTURE

“Public art, variously defined, has been around for thousands of years and the field continues to reinvent itself in response to cultural, historical and social conditions,” notes A Companion To Public Art (2016), edited by Cher Krause Knight and Harriet F. Senie. Take Paleolithic cave paintings, the oldest murals in the world. While mystery and conjecture still shroud our understanding of ancient humans’ artwork, their very presence implies a profound awareness of the immediate environment, a desire to make art an extension of life—much like many contemporary murals.

Over the centuries, public art has been used to drive, among other things, national or state identity, commemorate heroes, preserve collective memory, mark a pivotal moment in history, or as a form of propaganda. From the colonial era, statues have been erected in public spaces in Chennai: the now banished statue of Lord Cornwallis; an equestrian statue of the former Madras governor Thomas Munro; D.P. Roy Chowdhury’s Triumph Of Labour statue at Marina beach; sculptures of former leaders like M.G. Ramachandran, J. Jayalalithaa, Periyar E. V. Ramasamy and M. Karunanidhi. Political graffiti or pantheons of deities splayed across grimy, grey walls are a common sight.

A-Kill recalls how his mural at Kannagi Nagar, titled Sisters, inspired by two little girls he had photographed in the fishing hamlet of Nochikuppam, initially confused the residents. They thought he was painting a political figure or film star, he says. “They could not believe that a normal person could be painted on a wall too.”

The murals now emerging in the city are a relatively recent phenomenon, part of a larger movement. Like political activist and street artist Banksy’s Flying Balloons Girl, painted on a wall in Israel’s West Bank, or San Francisco’s Mission District murals, their themes are didactic, sometimes even counterculture. “In a sense, we are trying to grab eyeballs and say something that needs to be said,” says Swapna Sathish, faculty, fine arts, Stella Maris College. “I think, if done well, it does talk to the people who have access to that space.”

Bengaluru-based Poornima Sukumar of the Aravani Art Project, a collective that seeks to tell the stories of the trans community through art, first visited Chennai in 2017 to paint a wall in the Tsunami Quarters at Ernavur. The mural was an ode to 28-year-old Tara, a transgender woman from this locality who had immolated herself, allegedly because of police harassment. “It made a lot of sense to paint a wall in her name to remind trans women that whatever situation you are put through, you can’t resort to death,” says Sukumar.

ART AND THE CITY

Gayatri Nair, co-founder of the Chennai Photo Biennale (CPB), remembers the first time she entered Senate House along Marina beach, one of the finest examples of Indo-Saracenic architecture in the city. It was in terrible shape, flecked with bird droppings and filled with bats—both dead and alive. “There are so many spaces like this in the city, many ignored,” says Nair, adding, “If you protect a space by closing it up, it will start dying.”

The second edition of the CPB, in 2019, saw over 50 artists from around the world exhibiting their work at diverse locations in the city, some of them of historical significance, including the Madras Literary Society, the Government College of Fine Arts and the Egmore Government Museum. While the CPB tries to make art, specifically photography, more accessible, its focus on putting art in heritage spaces, working closely with the Chennai corporation to do so, is reshaping the way people view the city itself. “It was heartwarming to see my government supporting the arts so beautifully,” says Chennai-based yoga teacher and healer Divya Srinivasan, who visited the exhibition. “It was a showcase of heritage, and I honestly felt so proud of my city.”

If showcasing a city better is one function of public art, helping to preserve it is another. Arun Krishnamurthy, founder of the Environmentalist Foundation of India, a volunteer-driven wildlife conservation and habitat restoration group, talks about its Wall-E initiative. “Many public walls often get abused with political and cinema posters, which ruin the region’s look and feel. Moreover, this leads to urination, garbage dumping, thereby making these sites an eyesore,” he says, pointing out that wall painting both educates people about India’s wildlife diversity and helps defend the wall from defacement. “It establishes the fact that our creativity can help protect public property,” he says.

Public art, clearly, changes the dynamics of the built environment. Taking art out of galleries and into shared spaces, points out Nair, also alters the way someone views and thinks about it. “It makes art less alien to people,” she says. This is especially true of projects like Kannagi Nagar, which both derive from and become an extension of a specific community. “I think it is important to go hyperlocal, acknowledging and celebrating the culture of these people,” says Sukumar, whose mural in Kannagi Nagar last year celebrated womanhood. “Otherwise, who are we doing it for?”

Preeti Zachariah is a Chennai-based educator and storyteller.