The managing director of Hero Electric Vehicles, riding high on last year’s sales, acknowledges worries about charging infrastructure and servicing but remains bullish about the future of EVs 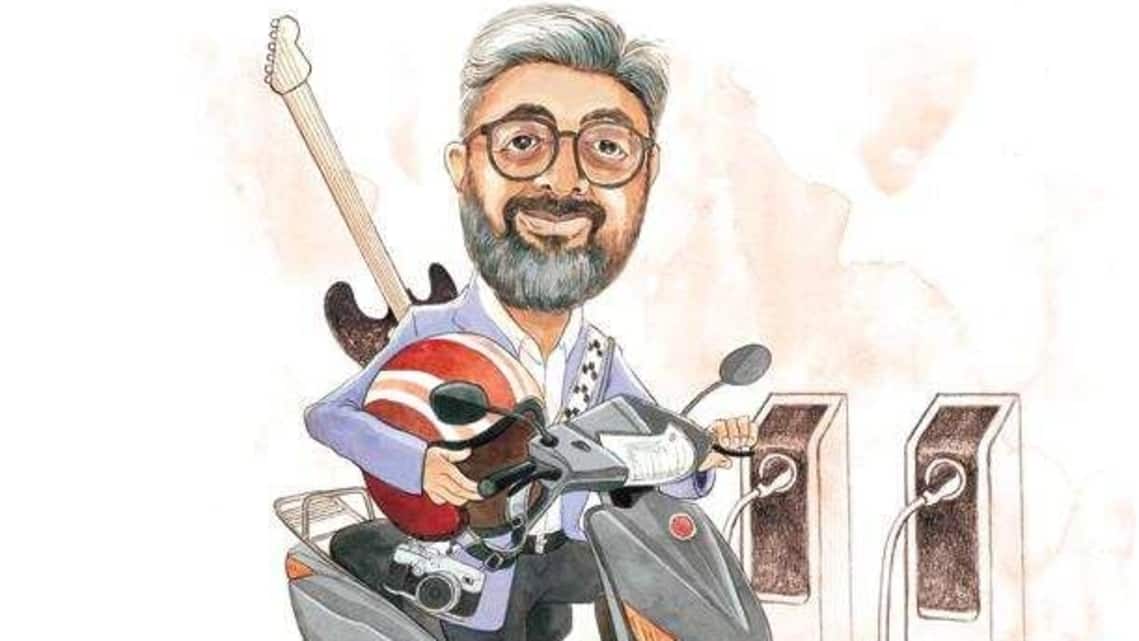 Naveen Munjal points to the guitar in the background as a short-lived lockdown pursuit. He had decided, like many others, to add a new skill during last year’s forced isolation by learning an instrument. But a short (online) stint with the school of music at the University of California, Berkeley, US, turned out to be too theoretical—Munjal was keen on more practical lessons.

The guitar took a back seat as the managing director of Hero Electric Vehicles Pvt. Ltd, a part of Hero Eco Group, turned his attention to some other interests, including an opportunity to teach, as he continued to push sales online. The company’s sales grew by 16% in 2020-21 over the previous year in spite of everything being shut in the early days of the pandemic-triggered lockdown, the supply chain taking a hit and transportation being stalled owing to farmer protests in north India later in the year.

The company, with an annual revenue of over ₹300 crore from the sale of more than 50,000 vehicles in 2020-21, managed to boost its online sales—from a mere 700-1,000 vehicles a year over the earlier five years to about 12,000 by the end of last year. Munjal, 49, says they decided to route digital sales also through their brick-and-mortar dealer network to keep them happy. To push online sales, the company conducted webinars for consumers, offered discounts and came up with a three-day return policy.

“We broke the shackles of competition with a blended model,” says Munjal during a Zoom call. “Last year was the best for us—it began with a dip and then an upward trend. In the last quarter of the year, 8,500-9,000 units were being shipped out month on month from the plant (in Ludhiana, Punjab). Retail sales were higher than what we were shipping—we were disposing of inventory. This year, our target is to double that.”

Munjal’s white shirt and salt-and-pepper beard blends with the monochromes of the background—sofa, curtains and cushions in combinations of black, white and grey. He pauses for a moment before answering questions, taking just a few seconds before coming up with a flow of detailed information. Munjal says he is not someone who enjoys working from home, even if “home” is a farmhouse in Delhi that has family and four dogs. He misses human interactions, gauging body language. Their office opened briefly last year, closing again when the second wave of the pandemic started, though the factory, with a production capacity of 250 e-bikes a day, continues to operate.

Born in Ludhiana into the Munjal family that owns the Hero brand, he went to The Lawrence School, Sanawar, when he was nine. Boarding school, he says, “pushes you to the boundary”. Once in college, in Ludhiana, he would go to the factory for half a day to understand their various businesses, absorbing everything about bicycles, casting, chain-making, aluminium and forging. An MBA in international marketing from Huron University in the UK followed.

He then worked for around eight months in 1994 with Land Rover in the UK. “Once I finished (college), I was not in the mood to come back (to India). Once you get here, no matter what stage you start (in the family business), you are not learning in the same manner because people will treat you as a boss. Any new member in a family business should have experience outside,” he says.

By the time he returned to India—and the bicycle business—at the insistence of his parents, he found a well-run machinery that didn’t need much change. Technically aligned, he wanted to diversify while not straying far from the industry. A trip to Las Vegas, US, in 1998 for a bicycle show ignited another spark—electric bikes.

Hero launched electric cycles in 2000-01, a failed venture that did not explain or market the product well, he says. In 2007, they launched lead acid based electric scooters; and by 2017, as the market expanded, most of the products moved to lithium ion portable batteries. The current portable lithium ion battery e-scooters are in the ₹46,000-72,000 range. In the midst of all this, in 2009, he became president of the newly formed Society of Manufacturers of Electric Vehicles (Smev). “I continue to wear that hat because, I guess, no one wants the role,” he says, smiling.

So far, Hero Electric has sold 350,000 electric vehicles (EVs) through a network of over 450 dealers and has about 6,000 trained mechanics. “We understood there is no charging infrastructure in India. So we made our batteries portable—you can take it to your apartment or office, charge it and plug back for a range of 80-210km. We made the battery uniform across the product range. We learnt what’s working only based on experience of failures of the past,” says Munjal. “If I charge at home and don’t have to go to an external charging centre or swapping or fuel station, that works well.”

The 2020 lockdown, with deserted streets, cleaner air and a growing interest in cycling, may have propelled an interest in EVs. But while cost-effectiveness—whether it’s the initial purchase price (especially for two-wheelers) or the running cost—may work in their favour, the positive impact on the environment is still not considered important enough to trigger a purchase, says Munjal.

Consumers still worry about vehicle range. “They do think of what if I go far and I lose charge,” he admits.

In 2020-21, EV penetration, compared to internal combustion engine (ICE) vehicles, was less than 1% for two-wheelers—for every 100 two-wheelers sold in the country, less than one was an EV. Awareness of the advantages of EVs remains poor in tier 3 cities and rural centres. Worries about the fact that these vehicles need a dense charging infrastructure—available at the grocery store, the chemist, etc.—and the kind of roadside mechanics who service ICEs, continue to dog sales. Battery disposal and recycling remain potentially hazardous. Four-wheeler EVs still have fewer products, high prices, limited battery life and financing—only about 10% of EVs get financing.

Some factors will trigger mass adoption, says Munjal. The gap in purchase price between ICEs and EVs will narrow as battery prices come down and performance improves. As of now, there’s a daunting difference of about 40%.

Competition is building up. Ola Electric is setting up what it claims will be the world’s largest scooter manufacturing facility in Tamil Nadu, Bajaj Auto, TVS Motor, new-age startups like Ather Energy, Okinawa Autotech and Ampere Vehicles are bringing in a range of vehicles. Hero is pushing for expansion too, to produce more than a million EV units over the next five years. The company will invest ₹700 crore over three-four years to ramp up annual production capacity from the current 75,000 units to a million.

He is relaxed about hobby options, though. Besides the aborted attempt at learning the guitar, he started learning about Artificial Intelligence while continuing with his enduring interest in street photography. “When I am stressed out or stuck, I go into processing my millions of pictures, listening to soft rock, and come back to some level of normalcy,” he says.

Munjal, who did a week-long, intense course in photography with Jay Maisel in New York in 2013, tells me about photographing a Danish couple on Brooklyn Bridge—the woman was terminally ill and was fulfilling a dream of visiting New York. Munjal sent them the pictures and found out much later that she had died. But his picture found a place on their bedside table.

He was most excited about teaching a course this summer on the future of EVs at the Masters’ Union School of Business in Gurugram, Haryana, diving deep into preparation with a Harvard course on tutoring. But the college shut after the second wave hit the National Capital Region this March, leaving Munjal disappointed. “I could have done it online but I wanted to interact with them—see their body language, and for them to see mine,” he says.

The other deep diving he does is of the literal kind. He tells me about the “craziest thing” he did once, diving 44m to a shipwreck in the Maldives with an instructor. When they came back up, he was instructed not to tell anyone about the daring descent.

“If the government finds out, you would be banned for 10 years, she (the instructor) said. Those 10 years are over, so I can talk about it,” he says, laughing. He also went diving once with a shark in an open aquarium with 10 million gallons of water in Kuala Lumpur—without realising that the tiger shark is not particularly fond of humans.

For the head of India’s largest electric vehicle manufacturer, that came as an aftershock.