How adaptability, collaboration, optimism and pragmatism enabled Pankaj Vermani to grow during the pandemic 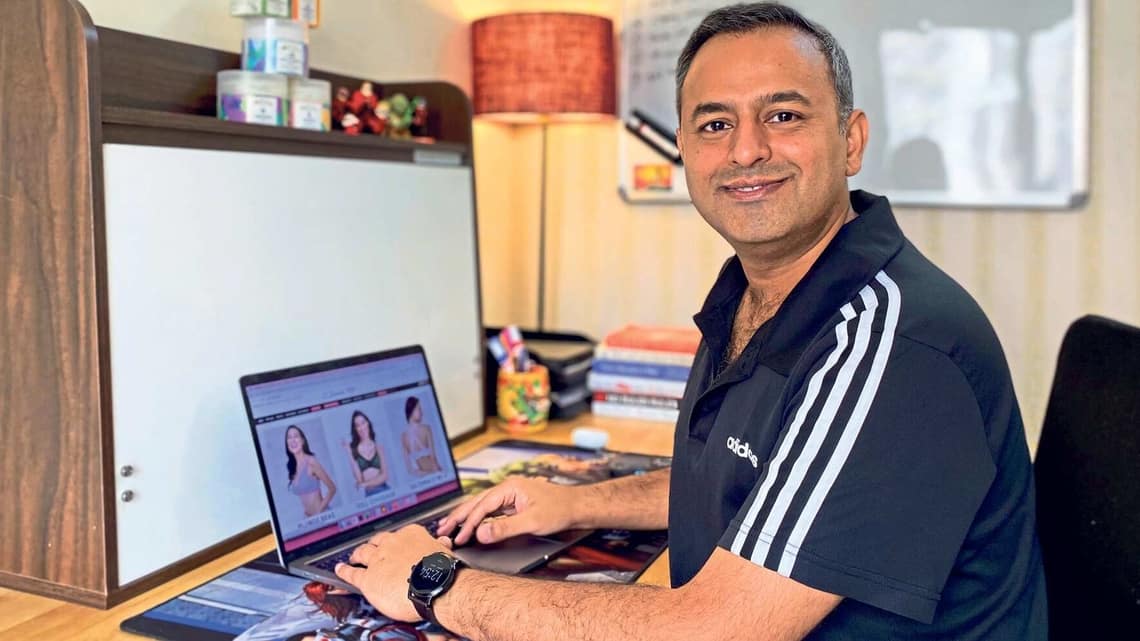 I see a large whiteboard, with a long to-do list, and a tiny desk, through my camera. To the side, there is a double bed. The room appears to be quite poorly lit. This is the home office of Noida-based Pankaj Vermani, the chief executive and co-founder of the lingerie brand Clovia. “This is a guestroom converted into a workspace. I often end up sleeping here, which is not a good sign,” says the 43-year-old. He has been working here since the lockdown last year.

Just like their product line, which is not usually visible to onlookers, what’s not immediately visible through the camera is more interesting. It is a room a few metres away from the guestroom, where Vermani’s wife and co-founder Neha Kant, works. With a bigger desk, a printer and sample bras strewn all over, it offers a better working arrangement than Vermani’s compact table. “I had a very interesting ‘man-cave’, and Neha has taken it over. I’ve kind of been thrown out of my room,” he laughs, as he takes me on a quick tour.

Vermani is an archetypal software engineer—an Indian Institute of Technology (IIT)-Delhi postgraduate in computer applications—and a serial entrepreneur, having started several ventures before founding Clovia in 2015 with his wife and Suman Chowdhury, a lingerie designer. The company claims to have three million users and an enviable footprint in tier-II and III towns. Despite a heavy toll on its offline retail stores during the current and past lockdowns, Vermani says it was profitable, at an EBITDA level, for the year gone by, bolstered by high gross margins and an expanded product line, which includes loungewear, sleepwear, maternity wear as well as covid-19 essentials, like PPE suits and masks.

The pile of bras makes me question: how does a touch-and-feel business migrate to the virtual world? In two words: Darwinian adaptability.

“Last March was probably the lowest I’ve ever been in my life. It was just a culmination of too many things. The cashflows just stopped completely, we were in a very precarious situation, as an organisation. In the first wave, we were not even ready, we did not know what it meant. Stress in business, stress in life, the worry about your people, worry about your family. It was just mayhem,” Vermani recalls.

The company responded by setting up three teams: one to take care of immediate cashflows, another to keep customers engaged and a third more long-term task force to plan for when the lockdown ends.

“That worked out very well for us. We were able to generate a lot of capital, put it back in the business. And the last two quarters have been literally unprecedented for us. We have grown almost on an average 15% monthly over the last four and a half months,” he says.

Infrastructure has adapted to the new reality. For example, a team of runners now ferry samples of new design between sales, production and design teams for their approval, since joint in-person meetings can’t be held. Quality assurance, production and merchandising teams continue to do factory visits, in a controlled manner, following all protocols and norms, and only where safe, he says.

Vermani has adapted his leadership style when working from home. He realised that he was calling his colleagues late at night and losing sight of boundaries. Now, he sets an alarm at 9pm to remind himself not to send WhatsApp messages post that. After 8pm, he drops a message before asking someone for a call. He eschews WhatsApp messages on Sunday (leaving aside emergencies). Instead, he drafts them over the weekend so he can send them on Monday morning. “These are the hacks you have to deploy for yourself because when you send a message, somebody is bound to respond. You have to become a lot more responsible. I call it a controlled communication channel,” he says.

Some of the company’s Darwinian instincts were so good that they could even predict, and prepare for, a surge in certain product lines. They extracted learnings from southeast Asian countries when Sars took place, and realised that many births happened immediately after the Sars lockdown. “By a similar math, we said we should be prepared for a surge in maternity wear by December and January. It worked for us. Our maternity wear, as a range, has grown. We spent a lot of energy there. It’s a funny anecdote but it worked out from a revenue perspective,” says Vermani.

Go BY THE playbook

Adaptability is, of course, an essential entrepreneurial trait, but it is not the only one that Vermani demonstrates.

He is collaborative, following the classic co-founders’ playbook of building a leadership team with complementary skills. Vermani, Kant and Chowdhury contribute technology, sales, and design and supply chain expertise, respectively. This troika has now expanded. The company recently announced that Sharen Jester Turney, former chief executive and president of global lingerie brand Victoria’s Secret, is partnering with Clovia as an advisor.

Vermani is optimistic. His mission is to achieve revenue of ₹1,000 crore and build an international brand out of India.

And he is pragmatic, optimising technology to manage a complicated supply chain of dozens of stock-keeping units, necessarily produced in small batches to minimise inventory costs.

It is the mix of these entrepreneurial traits—adaptability, collaboration, optimism and pragmatism—that has enabled Vermani and his team to continue to navigate the pandemic.

Yet most of all, he espouses a trait that I have not observed in too many businesspeople: He is a feminist. Just in the way he has ceded the best room in the house to his wife, my guess is that he has absorbed a distinct feminist ethos from her. She was the original proponent of starting Clovia, based on her observation of the prevailing demand-supply mismatch in Indian lingerie retail. After much market research and validation, Vermani bought into the idea.

“A well-fitted inner wear product is not the property of a select few. There is a very, very big opportunity to democratise this whole ecosystem. Can I get an international product into the hinterland of India, with the price point that they can absorb?

“A woman has enough battles to fight. Can we make it easier for you? Good innerwear can change a woman’s life.

Some reasons as to why he does what he does.

Aparna Piramal Raje meets heads of organisations every month to investigate the connections between their workspace design and working styles.