Lessons from the largest of all pandemics

Researchers such as Siddharth Chandra are looking back at the 1918 flu, which left nearly no inhabited region untouched, and possible lessons that can be applied to the present scenario 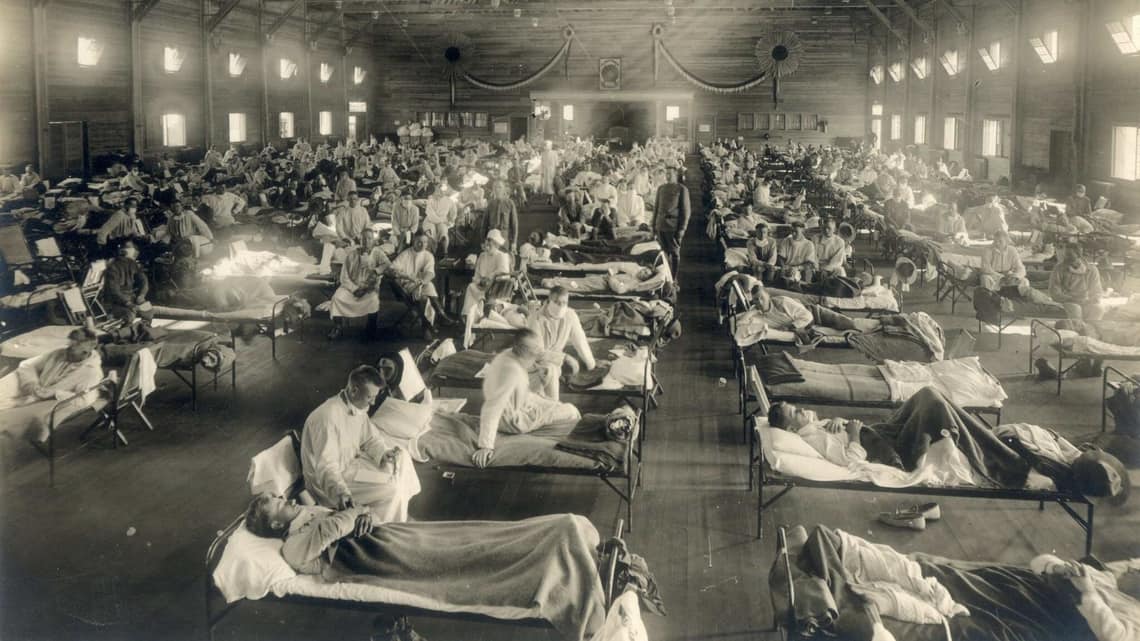 A century ago, the world was in the grip of a severe pandemic—referred to as the most devastating in recent history, with estimates of global mortality ranging from 20-50 million. The Spanish Flu of 1918 didn’t leave India untouched. Here it came to be known as the Bombay Influenza. The country alone witnessed a death toll of 10-20 million. Today, as we all face yet another pandemic in the form of covid-19, researchers and epidemiologists are re-examining the 1918 flu that raged for a couple of years, leaving virtually no inhabited region untouched, and trying to glean lessons that may hold true for the present scenario.

Siddharth Chandra, director of the Asian Studies Center and professor of economics at James Madison College, Michigan State University, US, along with Eva Kassens-Noor, an associate professor of urban and regional planning at the same university, has made it his mission to study the evolution, spread and mortality rates of the 1918 influenza across India using spatial or temporal data. Their study, The Evolution Of Pandemic Influenza: Evidence From India, 1918-19, published in the BMC Infectious Diseases journal, has yielded some interesting insights, both in terms of parallels with covid-19 as well as points of departure. Some of the data is still being studied but the report identifies important features of the 1918 flu spread in India, such as the nature of the waves, their severity, speed and duration, and age-specific immuno-protection, that can help understand the nature of influenza epidemics.

It’s ironic that while epidemiologists still refer to the Spanish Flu as the “mother of all pandemics”—caused by a member of the H1N1 family of influenza viruses, it lives on in different strains—it seems to have been wiped clean from public memory, at least in India. Chandra believes a number of factors may have contributed to this; one big reason being that until now, pandemics have not captured the public imagination like wars and conflict. “The Spanish Flu impacted the world in multiple waves between 1918 and 1921. But communication is much faster today than it was back then. Today, news of fatalities is made known instantly,” he says.

One also has to take into account the historical and political context when studying the Spanish Flu. It began just as World War I—a geopolitical event that impacted the entire world—was nearing its end. “Ten years later, the Great Depression happened, and the world soon hurtled into World War II. India was facing the Bengal famine and also struggling for independence. Put all this together and you will understand why the flu was forgotten,” says Chandra.

However, from whatever is known about the spread of the pandemic in India, it seems clear that undercounting of deaths was as much a problem then as it is now. “We are still not testing enough, and are attributing deaths to other factors,” says Chandra.

Staff at the main branch of the Canadian Bank of Commerce during the Spanish flu epidemic in Calgary in 1918. Staff are wearing face masks for protection. Photo: Wikimedia Commons

For their study, Chandra and Noor have referred to the census figures of British India before and after the 1918 pandemic, to gauge its impact on the population. The drop in the population graph presents a picture not just of deaths but also a drop in birth rate. “One reads in the news today about people having fewer babies, the baby bust in the US. This could be seen in 1918 as well,” he says. Chandra cites the examples of Japan and Taiwan (India census figures are under study). A study of their populations between 1916-21 shows that nine months after the pandemic peaked in October 1918, there was a huge dip in the number of births. The reasons could be both behavioural and biological. “It might have gotten harder to conceive. We must wait for the next India census. I can assure you that you will not see a normal birth rate. It will reveal some interesting patterns, with implications for future populations,” says Chandra.

Also read: How covid-19 changed the lives of the elderly

Every pandemic has an age signature— and that is a point of departure between the Spanish Flu and covid-19. The Spanish Flu impacted people in their prime—ages 20-40; till now, covid-19 had disproportionately impacted the elderly. “The age group that could have had babies was dying. We are not finding that today,” he says. That may be changing now.

In India, Bombay (now Mumbai) was the first to witness the peak in 1918; and it is bearing the worst brunt of covid-19 today. In fact, the Spanish Flu virus entered the country through the city. Thousands of Indian soldiers, who fought in World War I, returned home on ships, carrying the flu with them. According to the study, India experienced two distinct epidemic waves: a mild one in the summer of 1918 and a far more severe one in autumn and winter. The second wave, too, originated in Bombay in September 1918, spreading not just to other parts of the country but also to Sri Lanka.

The transportation system, especially the railways, became means by which the epidemic spread. In the east, Puri, a major pilgrimage site, witnessed a severe wave of the flu. After Bombay, Madras experienced the peak during October, followed by Calcutta. “Madras, to the southeast of Bombay, experienced the wave slightly later and in a less (albeit still) pronounced manner, and Calcutta, the easternmost of the three cities, experienced a prolonged but altogether less prominent second wave,” state the authors, which looked at data from 213 districts from nine Indian provinces.

One can see the shape of the wave change as the pandemic spreads from the west to the east. Was the virus evolving? Was human response changing? It also begs the question why was the pandemic so severe in India and Indonesia as opposed to countries like the US. “There is evidence that when people are undernourished due to massive famines, the fatality rate is higher. The other possible factor is population density,” says Chandra.

According to Chandra’s study, this becomes a key theme theory of evolution of epidemics—competition among strains of a rapidly evolving virus can produce an equilibrium in which the predominant strain is less virulent and slower to travel than the strain that predominated at the onset of the epidemic. “A second key explanation could be weather. Recent studies suggest that absolute humidity constrains both influenza virus survival and transmission efficiency,” it states, while adding: Analysing diffusion patterns of pandemics is difficult, as it depends upon various factors including place-specific public health responses, social interactions among people, travel patterns within cities and across countries, the natural and built environments, and characteristics of the pathogens themselves.

Also read: Should you continue to mask up even after you are vaccinated?

There are lessons to be learnt about the imposition of lockdowns. Should uniform restrictions be imposed across regions, irrespective of the intensity of the wave? “Take the example of Michigan, parts of which witnessed a massive wave in October 1918. The governor banned all public gatherings and the wave came crashing down. But not all places in Michigan had yet peaked. And then, like today, he faced pressure from businesses and lifted the ban. And then Michigan witnessed another wave,” says Chandra. “Even today, one sees administrations lifting and imposing bans without taking into account the spread or intensity (with the local administration giving inputs). The restrictions should be localised. What is happening today is very similar to what happened 100 years ago—I never thought I would be living my research.”

A century later, he adds, the deadliest pandemic in history can still offer lessons on welfare and economic policies, vaccines and medication, and health infrastructure. It can also put things in perspective for those simply grappling with the uncertainties of the moment. One of the most important lessons of the 1918 influenza pandemic was that as long as there were large numbers of people who are susceptible to infection, there was a lingering risk of repeated waves of infection and deaths. The 1918 pandemic dragged on for two or more years in some countries. "By comparison, the covid-19 pandemic has been in circulation for just over one year, and large numbers of people remain susceptible to the disease. Viewed in this light, it is unsurprising that India is experiencing a severe wave of infections now, and parts of the USA are also seeing a resurgence in numbers of cases and deaths," says Chandra

Ensuring that large numbers of people are vaccinated at the earliest opportunity will be key to returning life and economic activity to normal and towards preventing the emergence of future waves. He further adds that in the interim, ensuring that health systems have sufficient capacity to care for surges will remain important.

"Related to this, the 1918 influenza pandemic affected poor people far more severely than it affected wealthier people. The same pattern is increasingly visible during the covid-19 pandemic. Therefore, the above policies to mitigate the impacts of the pandemic and to bring it under control should also focus heavily on ensuring that the more vulnerable sections of society have as ready access to vaccination, health education and health care as wealthier sections of society," says Chandra.