The founder and CEO of Teabox talks about changing the way tea is sold in India, making the best quality teas available to Indian consumers, and how an article and a film flipped his fortunes 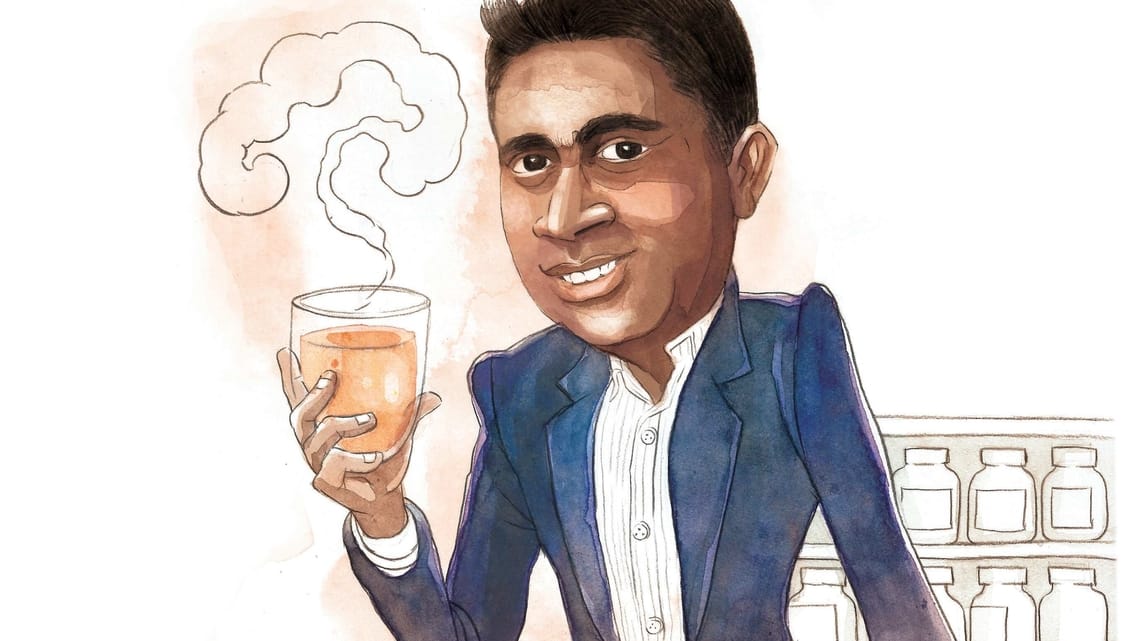 When The New York Times published an article in June 2014 on how Kausshal Dugarr was bringing the tea industry into the modern era with his online retailing startup Teabox, it triggered a chain of events. Teabox became a familiar name internationally, its website crashed owing to a surge in traffic, and it attracted the attention of, among others, an American billionaire who became a customer and then an investor in the company.

Dugarr, who used to spell his name with a single “s” and single “r” till he came under the spell of numerology, remembers the article as a turning point for his then fledgling company, which sources tea locally and sells it online the world over. The founder and CEO of Teabox, a part of Teaxpress Pvt. Ltd, says that the “literally full-page” article was “worth millions of dollars”.

Darjeeling tea, exported for decades, had a ready-made international market that was used to Indian tea. Teabox essentially speeded up the supply process to a tenth of the time taken, so that a consumer could have his first cup of tea within days of produce.

Since it was set up in 2013, the company has raised over $10 million (around ₹74 crore) through investors such as Accel Partners, JAFCO Asia and Ratan Tata, besides the Texan Robert M. Bass. It works with about 150 plantations across India—in Arunachal Pradesh, Meghalaya, Sikkim, Assam, Darjeeling and the Nilgiris—specialising in single-estate collections, similar to single-malt whisky.

Russia was once, oddly, their biggest market but the US has since gained ground. “You would be amazed that Russians drink more tea than vodka,” says Dugarr, grinning over a Zoom call from Siliguri, West Bengal.

Surprising as it may seem, last year’s lockdown came as a shot in the arm for the firm. More people ordered online, pushing annual revenue to about ₹90 crore. The firm turned “cash flow positive” in the last quarter of 2020. Today, it sells close to 400,000-450,000kg of “only leaf” from its roster of varieties. Among their tea brands, chai (mainly masala, flavoured and spiced cardamom, etc.), which is the cheapest brand but has the highest volumes, sells close to half a million kilograms annually. “We are fortunate to be in this position where, if we choose not to, we may not raise (more) money,” says Dugarr, smiling.

Teabox, often described as a positive disrupter, eliminated middlemen, cutting down the travel time between the produce and the end consumer from a minimum of five months to a few days. The sale of tea usually follows a trajectory—from producers to an auction, where it’s bought by an exporter, sold to an importer, then to a wholesaler and subsequently, a retailer. Focused initially on the international market, Dugarr wanted tea lovers to get their brew as fresh as possible.

When we talk, the 38-year-old is seated in the tea-tasting room of his Siliguri facility. In a collared T-shirt, he looks younger than his years. Up at 2.45am (he goes to bed around 7.30pm), he spends time meditating, and then starts work. He finds early mornings, or rather the middle of the night, most useful because no one else is awake at the time. Fortunately, we agree to have the conversation mid-morning.

Raised in Siliguri because his family and extended family were all into the tea business, his weekends were usually spent in visits to tea gardens and the hills. Just a few minutes drive from where they lived was the village of Naxalbari, known for birthing the Naxalite movement.

Today, business requires Dugarr to spend two weeks each in Bengaluru and Siliguri. But in about 20 minutes from his office in Siliguri, he says, “you can be amidst the mountains, forests, jungles, river and the clouds”.

As a child, he never thought he would work in the tea sector, though his earliest memories are of thousands of plantation workers, magically turning a “green-looking innocent leaf into a drink we all cherish”.

Post schooling, he enrolled for a commerce degree at St Xavier’s College in Kolkata but dropped out soon after to study for an undergraduate programme in business management, finance and marketing at Singapore Management University. Living abroad opened up the world for him—a teenager from small-town India suddenly found himself in one of the most advanced, modern countries.

He started two businesses post college; both, he says, were disastrous. The first was a luxury limousine business; he could not get the capital needed to scale it. The second was recycling electronic waste, something he could not manage cost-effectively in expensive Singapore. A two-year stint at KPMG in corporate finance gave Dugarr the experience of helping clients to raise money.

He returned to India in 2010. Part of a business-oriented Marwari family, he always had the itch to start something. “Doing a job was not so glamorous, neither was I coded to do that,” he says. Tea was a natural first choice, so he joined his elder brother Prateek’s tea export business for experience.

Dugarr realised the industry had not modernised or innovated—it was running just the way it had under the British. “There are so many intermediaries between the producer and end consumer but no one is adding any value. In more cases, (there is a) decrease in value due to the long supply chain,” he says.

The former amateur long-distance runner started a website, Darjeelingteaexpress.com, in 2013 to sell tea online. Established voices in the field were sceptical because they thought a sensory product like tea could not be sold remotely. But Dugarr believed that if coffee and wine could be sold online, so could tea.

Quite unexpectedly, Wes Anderson came to the rescue, albeit unknowingly. The American film-maker’s eccentric 2007 feature, The Darjeeling Limited, was an offbeat favourite and Dugarr was happy to take advantage of the word “Darjeeling” through search engine optimisation (SEO), pushing traffic to his site.

The “Siliguri guy”, as he was known at tea expositions and entrepreneur events, scored his first funding when Accel came on board. Darjeeling Tea Express metamorphosised into Teabox. His father, Kanak, was initially concerned about his son’s career choice but the funding helped him realise that “maybe Kausshal is not that stupid”, Dugarr recalls, laughing. Senior Dugar became the company’s first non-institutional investor.

Dugarr explains that most of the tea industry, predominantly located in Kolkata and run by third-fourth generations of families, is old school in that it believes that if something is not broken, you shouldn’t try to fix it. Tea is a profitable business that provides instant payments and a comfortable lifestyle for many, so it did not really need any tinkering.

Dugarr thought otherwise. “The nearest garden to us is 25 minutes away—most gardens we buy from are in a six- to eight-hour radius. Within 10 days of produce, you (the consumer) get your first cup of tea.”

Starting with loose teas, the firm evolved to include tea bags, green tea and chai. Teaxpress has added a brand, Sammvaad, that gives women an opportunity to be “chaipreneurs”—by selling tea from their homes after buying a minimum amount. In two years, they have got about 2,500 such sales partners around the country. “Chai is not just a beverage. It’s a tool for social transformation,” says Dugarr, who co-founded a not-for-profit, Books to Read, in 2008 for schoolchildren in developing countries to access books.

His wife Prachi Jain, a co-founder of Teabox, took care of the design, brand language and aesthetic packaging required for a premium brand. “Prachi is our secret sauce,” says Dugarr, adding with a laugh, “and she says no 90% of the time.” Their daughter Dia, a little over five, is their “chief taster”—she visited the office every day till she was about four.

The family shifted to Bengaluru less than five years ago because it was difficult to get the professional talent they needed in Siliguri. The biggest challenge, he says, has been the industry mindset. In the initial days, it was difficult even to get support from his family. From a business perspective, his greatest blow came on 18 December 2018, when a fire destroyed almost 70% of their inventory in Siliguri.

“That was the day two things stood out,” adds Dugarr. “One was the tenacity of people who worked for us—I heard stories about people trying to salvage what they could, making a human chain, crawling down and passing bags. Second, we got calls from the industry, who said take tea from us and pay when you want. It showed the amount of goodwill we had.”

Their plan of having more offline retail stores—besides the two at the airports in Bengaluru and Mumbai—has been postponed due to the pandemic. That would be the key to growth, he says, because theirs is not a cheap brand. They sell at ₹4,000 to ₹2 lakh a kilogram (their cheapest chai, Teabox Strong CTC Black, is ₹599 for 300g. Brands like Brooke Bond Red Label, in comparison, cost ₹160 for 250g).

Though he has now sold over two billion cups of tea across 120 countries, one experience stands out for Dugarr. In the early days, when he used to look at all orders personally, there was one from the Pacific Ocean island of Kiribati. He had never heard of it and dismissed it as a hoax till they got an email from the customer.

They managed to send it—except for Saharan Africa and Antarctica, Dugarr says, they have shipped their tea everywhere. “I grew up in Siliguri and we are the only startup here. There was a survey of local employers and we were No.1 by default,” he says smiling.

“I want to make a difference, make Teabox synonymous with India and build a brand with a purpose.”