Confessions of a jewel thief

Chand Mohammed, leader of the ‘Namaste Gang’ in Delhi, could sweet-talk anyone into handing over their valuables. Lounge meets the conman in police custody to understand how he duped over 250 people in the past three years 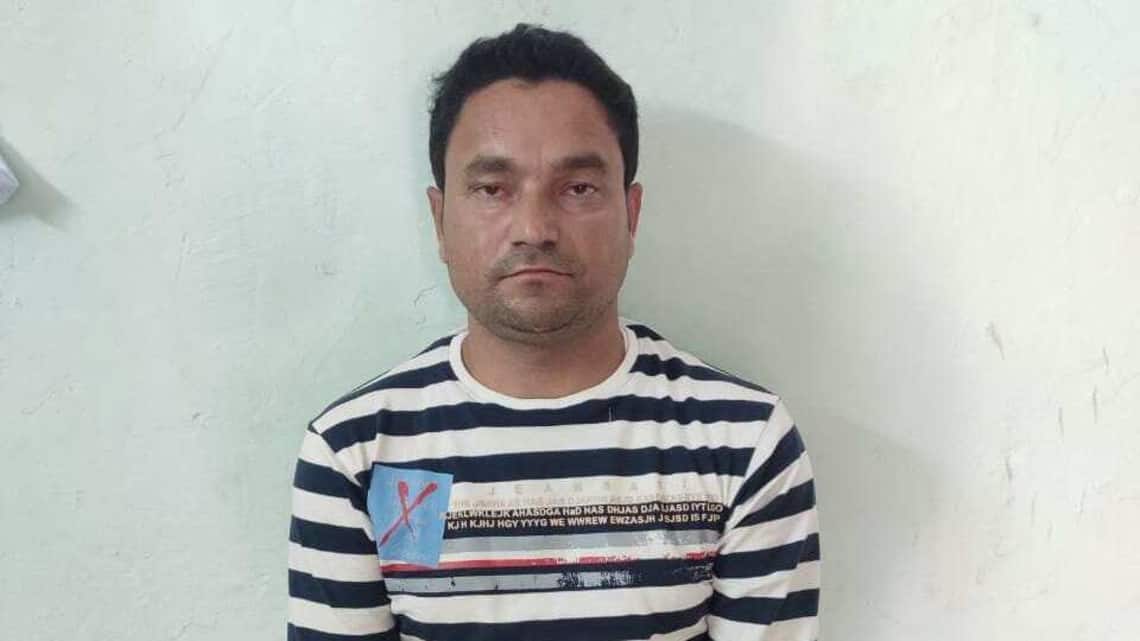 There were no threats, no coercion. Chand Mohammed would say ‘namaste’, even touch his victims' feet before conning them

If you’d crossed him on the street, chances are, you didn’t look twice. Chand Mohammed has that going for him. He is one of those short, heavy-set guys you expect to encounter in Delhi. He also made an effort to stay inconspicuous. When out to steal, he’d wear a helmet that shielded him from the prying CCTV cameras. He also used a scooter without a number-plate. His only indulgence was an eye-popping shade of footwear – a pair of ocean-blue sneakers. That's what did him in.

With Mohammed, it is the person, not his persona, that set him apart. He is a man with an easy charm, a ready smile and enviable storytelling skills. For the two hours we spoke in his police custody, Mohammed held me – and a coterie of policemen that surrounded us at the Sanjay Colony police post in Delhi – in thrall. He used his social-skills to con unsuspecting elderly people, he said. He took pride in it too: “Come with me [to the streets],” he declared once. “Let the police come too. Jo bhi milega, tight karke dikha doonga aapke saamne. (Whoever you find, I’ll con them in front of you).” The cops were in splits. “It’s true,” one said.

It was an exaggerated claim, though. His trick was smart but not particularly imaginative. He’d walk up to his victim, say he’s a jeweller, and that their son had asked him to make a new ring/bangle/necklace for them. He’d first need to take the measurements, he’d tell them. Could he see the ring/bangle/necklace they were wearing?

There were no threats, no coercion. He’d say ‘namaste’, even touch the elders’ feet. Once they handed their jewellery, he’d take them to a his ‘store’ – often a random shopping or apartment complex – and ask them to wait at the entrance. Be right back, he’d tell them. He’d never return.

It’s probably why the Delhi police press release, issued after his arrest, called him the leader of ‘Namaste Gang’. It was an etymological overreach – the last ‘Namaste Gang’ was a group from Uttar Pradesh who’d stop solo motorists with the salute and then rob at gunpoint. Nevertheless, the press release went on, Mohammed had confessed to over 100 thefts in south and west Delhi. He had sold this stash to jewellers (or ‘gang’ members, only one of whom has been arrested so far) and made nearly ₹60 lakh. But Mohammed had also gambled away most of it.

In the photograph accompanying the release, six pokerfaced policemen stand in a line, their masks pulled to their chin. In front of them is a table with the recovery: three tiny earrings. Mohammed, in black tee, red jeans and blue shoes, is at their feet. There are no cuffs on his hands, no black cloth on face. He’s bent on his haunches and looks at ease around the cops. Just like they seem at ease around him.

Chand Mohammed (on his haunches) with cops from Sanjay Colony Police Post, Delhi

They’d nabbed him from near his place in Chhattarpur, New Delhi. They’d tracked him after scanning footage from the CCTV cameras around his last robbery the week before. Usually, Mohammed would go 20-30km away, to west and south Delhi, to steal. This time, it was only a couple of kilometres from his residence. The police had managed to track him down. On 27 October, they arrested him.

I met him at Sanjay Colony police post four days later. He was being held in custody in a small room behind the duty officer’s. Mohammed greeted me with a cheery wave and, while sharing minute details of his con, owned up to his doings. “I’m going to go to the jail after this,” he said, all contrite. “I’ll not apply for a bail, nor put up a defence. I deserve it.”

If you were there, you’d believe him too.

There is a certain archetype of ‘petty thieves’ that newspaper illustrators have popularised over the years. A burglar in a balaclava, tip-toeing away from a house with a big bag of cash. Two chain snatchers on a bike, yanking at a necklace of a sari-clad woman in a crowded marketplace. Others like pickpockets, carjackers, ATM-machine skimmers, each have their own caricature: shifty-eyed men lurking in urban settings, preying on helpless, wide-eyed victims. They don’t blend in – they stand out.

But there’s another kind of such ‘petty’ criminals who hide in plain sight, who meld their con with social savvy. It’s often these who are more successful their traditional counterparts, says ACP Rajender Singh, a detective from Delhi police who retired last month. “Like the ‘Irani gangs’ from Nagpur, who disguise themselves as police officers and steal their valuables on the pretext of keeping them safe. Or the ‘baraat thieves’ from Madhya Pradesh, who dress up and crash weddings with hired kids, and steal gifts and jewellery from the guests.”

Singh should know. In his three-decade career, he has arrested many of them, including the best-known of the lot: Bunty Chor. Bunty was a smooth-talking burglar from Delhi who often broke into the houses of the rich and the well-heeled to steal cars and other valuables. His escapades were later chronicled in Oye Lucky Lucky Oye, a 2008 black-comedy by Dibakar Banerjee.

“Bunty could think on his feet,” says Singh. “One time, he was almost caught but escaped saying that he was delivering a birthday gift. On another occasion, he invited the president of a housing society he was living in, pointed at a family photograph he’d stolen from someone, and introduced them as his wife and kids.”

Bunty Chor, an infamous thief from Delhi, was among the few could meld their con with social savvy. His series of thefts inspired Dibakar Banerjee's dark comedy 'Oye Lucky Lucky Oye'

In doing so, says Singh, Bunty set the template for many to follow. “Most thieves aren’t comfortable in presence of their victims,” says Singh. It’s why many try to intimidate or go about stealing surreptitiously. “But Bunty showed that to con, you also had to be psychologically strong. He was witty and confident. He could win people’s trust.”

In terms of scale and ambition, Mohammed is a far tamer version of Bunty. He’d watch Crime Patrol but says his trick was his own. He targeted only the vulnerable – senior citizens, most of them women, out on the streets alone. He’d track their movements, then approach them on his bike and strike up a conversation. You could ask why they were so gullible. But it was his cover story that touched a raw nerve.

“In my experience, most mothers-in-law don’t get along with their daughters-in-law,” he says. “So I’d tell them,’Your son has sent me to make you a necklace. But please don’t tell your daughter-in-law about that.’ Most would then be far willing to listen.” He’d then tease out the names of their sons, first by using vague descriptors like "the older one", and then assume familiarity. With men, Mohammed dropped the saas-bahu act and pretended to be the son’s jeweller friend who’d been commissioned to make them a ring.

His con didn’t work all the time. (“At such times, I’d say jai mata di and walk away.”) He’d also be discerning on who to con (“I’d never leave anyone who is from a big house. I’d spare ones who said their sons did nothing.”) His tactics didn’t involve any force. His crime was always in a public place.

His victims confirm that. Sudha Sharma, a 77-year-old from Hari Nagar in Delhi, was out to the local dairy when Mohammed intercepted her. “He said, 'Your nephew wanted to make bangles for his wife.' I handed it over. He went away,” said Sharma.

It was mid-morning. There were plenty of people around them too. “But none of them came in to help,” said Sharma. “Given the way he was talking, they thought we knew each other.”

With Maya Devi Gupta, a 77-year-old from Maidan Garhi, a CCTV footage shows him lurking outside her residence a few minutes before she left. “Our landlord was outside our house reading newspaper,” her grandson Sharad Gupta recalled. “When my grandmother came out to buy some atta, (Mohammed) saluted him in front of her. Then he went up to her and said, the landlord wants to see her earrings.” Maya Devi assumed he wanted to make similar ones for his wife. The landlord told them later he was wondering why a stranger would salute him.

The Guptas complained to the police on 17 October. It was only their earrings that the police managed to recover. For the rest, they arrested Dinesh Soni, a Delhi-based jeweller, for allegedly buying Mohammed’s stolen goods.

Umesh Yadav, sub-inspector from Sanjay Colony police station, said that the arrest had helped them crack 27 FIRs from across Delhi over the past three years. “More are coming in everyday,” he adds.

Yadav was the one who had invited me to meet Mohammed. “Hear it from the horse’s mouth,” he’d said. Mohammed, too, was more than willing. He wasn’t under any duress, he said. “The police had treated me very well," he said. They even fed him the same food they eat, he added, as he was served a dinner of roti and potato curry during our conversation. After the meal, he asked the cops for a bidi. “Pilwa denge,” he was told indulgently.

Before we ended our chat, Mohammed said he’s ready to face jail-time. “I won’t return before I’m old or dead,” he says. “If I do, I’ll be reformed.”

It’s unclear if he will, though. A day after our meeting, his wife, Salatun, said that he had pleaded in the courts that he wasn’t guilty. “They’ve framed him,” she says without getting into the specifics. Mohammed, who’d shared her number with me, said that he didn’t want his family to know he did it. He blew up his cash to keep up his gambling habits and on an extra-marital affair he had been having. It was something he regretted.

“I confessed because I knew mere paapo ka ghada bhar chuka tha,” he told me. “I knew I wouldn’t stop until the police caught me. And now, as I am telling you all this, it feels lighter. Like I’m being reborn.”

Head constable Vijender Singh was among the cops listening in on our chat. “He’s telling you because he thinks you’d make him famous and they’d make a film on him,” he said once Mohammed was taken away to his detention cell. “Like Bunty aur Babli.”