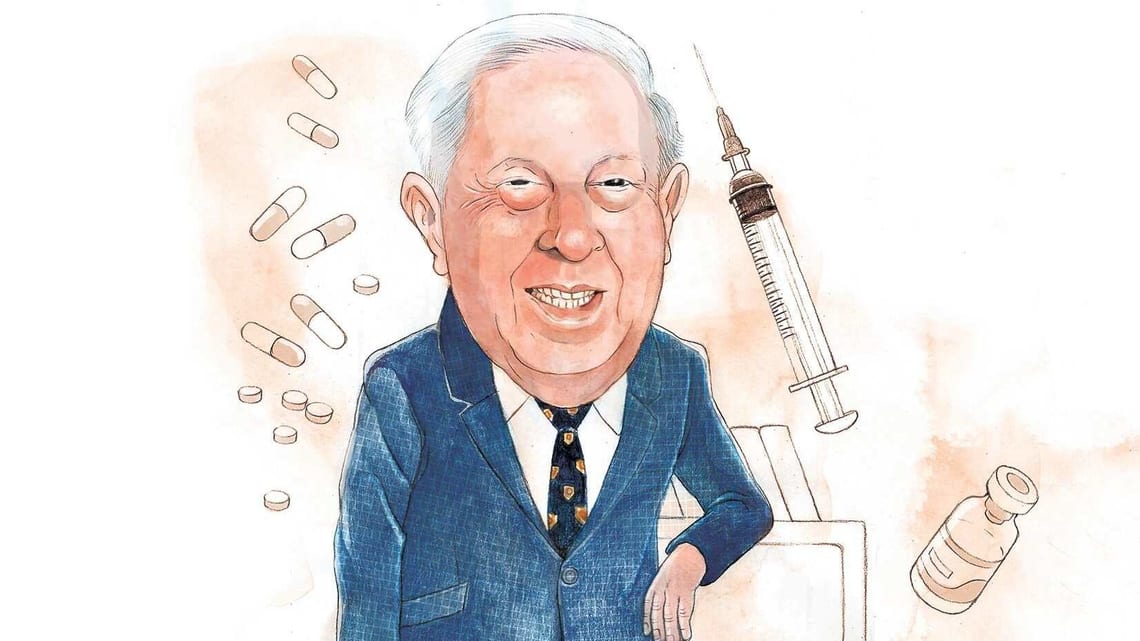 Sitting at his home in Marbella in southern Spain, Yusuf K. Hamied, the 84-year-old chairman of Cipla, one of India’s oldest pharmaceutical companies and a global pharma behemoth, recalls the exact moment when he realised the covid-19 pandemic was serious. “I will go back 20 years, when we had a similar situation with HIV and AIDS. We took up the challenge, but that’s not the story. The story is that there is a journalist called Donald McNeil from The New York Times, and Donald wrote about HIV/AIDS in 2001, after which the whole story erupted. Last year, in the month of February, he wrote an article in The New York Times saying that in his estimation, if covid is not controlled, 20 million people will die. And that really shook me up because I have great faith in what Donald McNeil writes,” says Hamied.

His memory is impeccable—it was indeed in February 2020, when most of the world was oblivious to the threat of the coronavirus, that McNeil warned it could become a global health crisis.

The Cipla chairman is not involved in the day-to-day running of the company: At one point, as we are talking about the drugs Cipla has deployed to treat covid-19, such as Cipremi—a generic version of Gilead Sciences’ remdesivir, manufactured and marketed under a voluntary non-exclusive licence—he says I must “ask Umang or Samina more about this”, referring to Cipla CEO Umang Vohra and executive vice-chairperson Samina Hamied, his niece. But it’s clear that Cipla and medicine remain at the core of his existence.

He doesn’t give too many interviews but this is a special time: The company turned 85 last year, and a book that traces the Cipla journey, from the pre-independence era to the present day, is being published a week from now. Caring For Life: The Cipla Story Since 1935, written by veteran Mumbai-based journalist Tulsi Vatsal, is a comprehensive and meticulously researched history of the company founded by Hamied’s father, Khwaja Abdul Hamied, in 1935, inspired by Mahatma Gandhi’s call for self-reliance and self-sufficiency and a desire to make affordable drugs available to the country’s poorest citizens—core values that continue to define the company, which has a market cap of over ₹680 billion today.

“People have been saying, why don’t you write an autobiography? I have said no, my autobiography is Cipla,” says Hamied. “If you write a story on Cipla, it is virtually the family’s story. So de facto, this book is like that autobiography, though I certainly believe that no one individual can do very much, it has to be a team effort. Actually, the book is the brainchild of my brother and his daughter Rumana, they felt we should have a book that tells the story of Cipla. It just so happens that so much of my own story is also woven into it.”

Hamied as a child (Photo: Cipla)

Having graduated with a bachelor’s in chemistry from Christ’s College, Cambridge, in 1957, followed by a PhD in chemistry, again from Cambridge, Hamied returned to India in the early 1960s and started working at Cipla—as general dogsbody, not a leader-in-waiting. “In the beginning, I remember cleaning the floors in the tablet department also. Actually, it took two years for me to even get employment in Cipla, because I was related to a director. The board of directors was very strict. So for one-and-a-half years, I worked almost as a trainee with no salary, with a PhD degree, cleaning the floors. So what I decided was, I would learn the pharma industry backwards. Nobody will know more about the industry than I do, and that’s exactly what I did. I learnt how to make tablets, I learnt how to make injections...I did just about everything,” he recalls.

When his father died in 1972, Cipla was still “a small baby”, says Hamied, with an yearly turnover of ₹1.6 crore. Between then and the early 2000s, it grew several hundred times as the Indian pharma industry took off and companies like Cipla gained a global reputation as leading manufacturers of generic drugs and active pharmaceutical ingredients (APIs).

But the one thing that brought Cipla and its chairman global fame, recognition, and even a certain amount of notoriety, was the war on AIDS in the early noughties. In September 2000, Hamied jolted the European Commission on AIDS during a meeting that was to change the course of global history by telling them that he could break the monopoly of the big pharmaceutical companies that had put AIDS drugs beyond the reach of the people who most needed them, and supply AIDS treatment at less than $1 per day. Suddenly, Hamied was a hero in the war on AIDS, and the man who had made big pharma shake in its boots. “The assumption that AIDS drugs were not for the poor—that they could not afford them and therefore that there was no point even thinking about ways to get people treated—was blown out of the water,” wrote Sarah Boseley in The Guardian in a 2003 profile of Hamied, calling him “generic drugs boss”. “Now, in the post-Hamied era, the genie will not go back in the bottle. The big drug companies have been forced to drop their prices for these new and powerful drugs and offer them to a market they had no interest in developing—the impoverished African states where a whole generation of parents, teachers and workers are dying.”

Although Western media labelled him as something of a renegade—almost a Robin Hood figure in global pharma—Hamied seems reluctant to accept that image today. “We did not break any laws. How are we bad boys then? We abide by the laws of the land. If we had broken any laws, we would have been prosecuted,” he says. But did he enjoy, at some level, being the nemesis of Big Pharma? “No. No. What I did enjoy is the pioneering work that Cipla did. What the Cipla team did, it’s not me, saved the lives of all the people, the 8,000 people that were dying in Africa per day because they could not afford treatment...and today, by the grace of God, over 20 million in Africa alone are being treated for AIDS. It’s a big change, it’s a very big change.”

At the start of his decades-long career, was there ever a moment of doubt about whether this was what he wanted to do? After all, he had followed in his father’s footsteps. “No, my father never forced his children over what they should do. It just happened that I was proficient in chemistry. It wasn’t pushed down my throat. I think that a person should do what he’s best at. I mean, I can’t be a journalist like you, for example,” says Hamied. “I am a very poor writer. You can’t be a chemist. So I am a great believer that water finds its own level, that a person should do what they are best at.”

When a firm is over 85 years old and successful by all measures, as Cipla is, some of the biggest challenges are not the quotidian ones of revenue and profits; they are the larger ones of constant innovation, the fear of stagnation, the creation of a legacy, of finding leaders to take the company into the future. And Hamied knows this. “There are two words that define the pharma industry,” he says. “One is the word monopoly, and the other is the word obsolescence. New drugs have to be produced because the older drugs die. It is one of the few industries where you have to keep on innovating and Cipla, in that sense, has been quite an innovator in introducing newer drugs, right up to 2005.”

Although he doesn’t elaborate, he is referring to the Indian Patents (Amendment) Act of 2005, which led from India’s accession to the World Trade Organisation and signing the Agreement on Trade Related Aspects of Intellectual Property Rights (TRIPS)—legislation that reintroduced a product patent regime in India and limited the ability of Indian pharma companies to produce drugs through reverse engineering.

Despite this setback, “incremental innovation” remains a buzzword with Hamied. He does not believe in reinventing the wheel, but in using existing technologies smartly to deliver the best outcomes to people in an affordable manner. “The pharma industry is growing by leaps and bounds, and we also have to go that route, but what India also requires is what I call appropriate technology, technology that is suited to our country and our needs, and which is summed up in two words: incremental innovation,” says Hamied. He adds: “How do you repurpose drugs? How do you reposition them? I will give you an example—there is a drug called ivermectin, it was used to treat parasite infections, and now it is being used for treating covid. That’s called repurposing and repositioning, and this is the area in which India could take a lead. I am not saying we halt innovation, but we are better off today with incremental innovation rather than concept innovation.”

As we begin to wrap up the interview, with prods from the public relations team to steer the discussion towards the Cipla book, Hamied says: “People ask me about my success stories, but no one asks me about my failures. Would you like to know? It is family planning. I thought, in 1960, that India should take the lead in family planning. And we started producing family planning drugs, but it was a big failure, I won’t hesitate to say it was a big failure. And even today, I hold that what India requires is population control on an urgent, war footing.”

The PR team is getting restive, we are about to sign off, goodbyes have been said, Hamied has turned towards someone in the house in Marbella to confirm that they are going out for lunch, the view outside the window (he turns the laptop screen towards his balcony) has been admired, and we are about to hit “leave” on the Zoom screen.

And then Hamied says, “Ask me one more question.”