| Logout Log in/Register
Home > How To Lounge> Movies & TV > The #FriendsReunion mess, and The One Reunion That Got It Right
Stream of Stories

The #FriendsReunion mess, and The One Reunion That Got It Right

TV reunions serve empty calories in the guise of comfort food. A worthy reunion demands more—like the 'Seinfeld' reunion on 'Curb Your Enthusiasm' 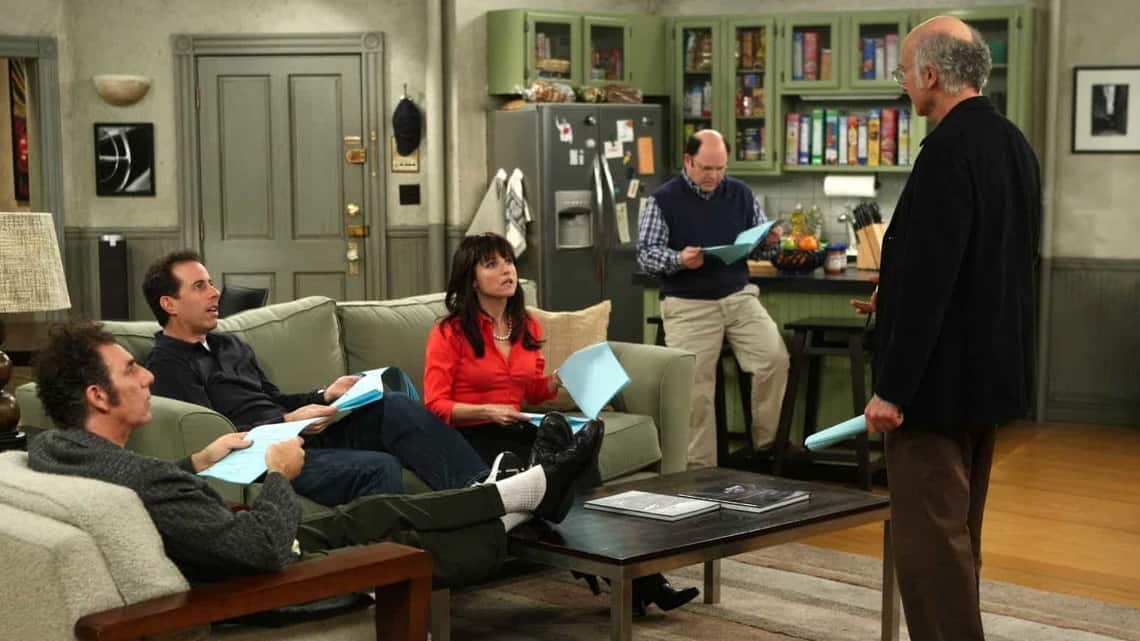 The 'Seinfeld' reunion on 'Curb Your Enthusiasm'

They must like being stuck in second gear. The Friends Reunion that premiered on Zee5 last week was nostalgic, schmaltzy and strikingly unimaginative. I was surprised by the laziness, creators evidently thinking seating six actors on a couch was enough. Going by fan reactions across the globe, it may even have been. Having said that, given this budget and this audience, they wasted a chance to do something cool.

Also read: ‘Friends’ was there for me

Television reunions traditionally serve empty calories in the guise of comfort food. A worthy reunion demands more. Something as ingenious as the original, not reliant on nostalgia to iron out its numerous wrinkles. Something that captures the originality and spirit of the show we loved. Something in character with the characters.

A Seinfeld reunion is unthinkable. The series wrapped up while still the most popular show on television, creators Jerry Seinfeld and Larry David making such obscene amounts of money as to forever avoid any craven cash-grab. However, in the parallel universe inside Larry David’s Curb Your Enthusiasm (streaming in India on Disney+ Hotstar), unthinkable is fair game.

On Curb, David plays a misanthropic version of himself, and the Seinfeld reunion storyline — spread across several episodes of the seventh season — involves David staging a special episode in a desperate bid to win back his estranged wife. His motives couldn’t be less creative, but suddenly the Seinfeld cast and crew (including guest stars, writers and producers) are back in David’s on-screen life.

As Seinfeld character George Costanza (played by Jason Alexander) is based on David’s own personality, David suggests the special be about George getting his ex-wife back. He also recommends that his own wife play George’s wife, because she’s experienced the situations he’s writing about. Seinfeld, eager to cast Meg Ryan instead, is instantly skeptical: “You think Nixon could have been Nixon in Frost/Nixon?” This is gold, dear reader, gold.

“Where Larry on Seinfeld would reshoot a scene if you said ‘but’ when he’d written ‘and,’” said Alexander about the drastic difference in approach, “here’s a show where he hasn’t written a word!” Seinfeld had iron-clad scripts, exceptionally gifted actors and little wiggle-room. Curb has elaborate situations and plot set in stone, but nearly all the dialogue is improvised by actors playing off each other. By making these universes collide, David and his Seinfeld gang can explore their show more freely.

Watching David and Seinfeld spar on screen as they write ‘the reunion episode’ provides actual insight into their collaborative process. It also allows Seinfeld—a notoriously bad actor, who spent nine seasons visibly trying not to laugh while three maestros dazzled around him—some absolution. An unscripted Jerry Seinfeld is looser, cooler, distinctly more natural. Especially when laughing at a filthy joke.

Curb skirts no subject. In 2006, Michael Richards who plays Kramer on Seinfeld, derailed his career with an on-stage rant where he used the n-word, and was captured by audience cellphones. The comedian apologised profusely, stopped performing altogether, and sought professional therapy. In Curb, when Richards, with classic Kramer cluelessness, answers the door to see an unfamiliar black man (Curb regular JB Smoove) he recoils: “Look, I made a mistake! It’s been three years, don’t hurt me! Please!” Smoove then fools Richards in convoluted fashion, and when the hoax is eventually revealed, Richards is irate. He confronts Smoove, and yells—“If only there were a horrible name that I could call you that would make you as angry as I am”—as a crowd gathers to film him.

Julia Louis-Dreyfus is terrific as both ‘Julia’ and Elaine, showing just the right overlap between the two. The actress demonstrates the giant gulf between reading the lines around a table—discovering the words, smirking at them—and delivering them for production, inflections and pauses precisely calibrated, the words elevated by that Elaine-ness we recognise and adore. Curb shows us the same material being shaped: being unearthed around the table, polished during rehearsal, performed for the final episode. We get to see how the soup is made.

The best storyline belongs to George Costanza. Not only does Jason Alexander play David’s alter ego—“he’s so unappealing,” the actor tells a scowling David, “a jerky, schmucky little guy”—but David competitively leans into his own Costanza-ness, and each tries to out-George the other. Alexander, fed up, quits the reunion. “You got no George, you got no show,” says Seinfeld. “It’s a three-legged goat.” Larry, in all solemness, suggests he play George himself. Jerry, Elaine and Kramer burst into the greatest, most uproarious laugh. Larry’s attempt is indescribable.

The genius of this Seinfeld reunion is that the actual ‘episode’ they are creating is entirely unremarkable. The lines are okay and the actors brilliant, but having them go through the motions seems to be David’s way of highlighting the mediocrity of the standard reunion exercise. Merely creating another Seinfeld episode—with the same characters, the same conflicts—could never feel spongeworthy enough.

Also read: How Larry David made the sitcom great again

When Seinfeld began in 1989, the creators swore to uphold a “no hugging, no learning” coda, in stark contrast with existing sitcoms where characters unruffled feathers and evolved by the time the credits rolled. Seinfeld featured four self-centred New Yorkers only acting increasingly unpleasant. There wasn’t a redemption arc in sight, only minutiae. Jerry and George, trying to make a TV series about themselves, pitched it as “a show about nothing.”

True to that spirit, Curb gave us the Seinfeld alumni as we love them: petty, mean, and, despite having left the series behind, people who decidedly do not know better. As they obsess and bicker and snipe at each other, they actually impact plotlines and characters on Curb Your Enthusiasm. Giving consequences to their actions is groundbreaking, making this project much more than a nostalgia trip. It is a reunion… about something.