The deeply daft pleasures of 'Taskmaster'

'Taskmaster' is a British series that gives a diverse gang of comedians daft things to do. It's glorious 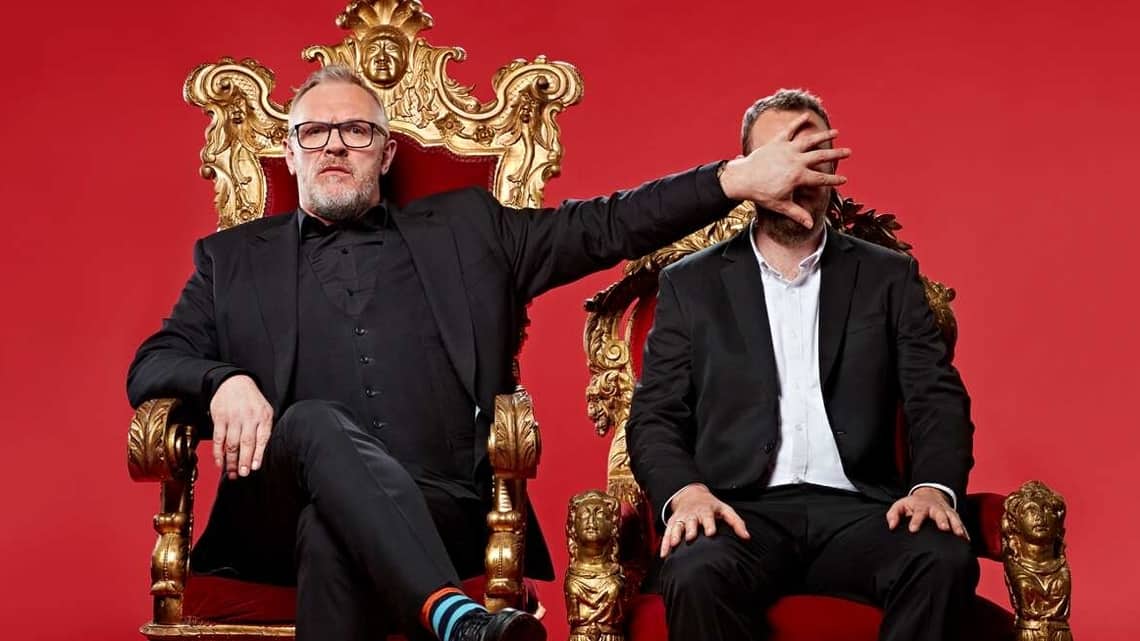 Why do we do what we do? The absolute arbitrariness of our to-do lists—and, indeed, our lives and careers—has been thrown into alarming, existential focus by the pandemic, which has made most activities appear meaningless. Those of us with “non-essential jobs” have been rudely reminded of our own pointlessness, and too many of us are working on things contingent on factors far outside our control.

In this world, a clear objective is a beautiful, elusive thing. Even if it is to “make a coconut look like a businessman”.

Taskmaster is a British series that gives a diverse gang of comedians daft things to do. Greg Davies is the titular Taskmaster, a capricious and all-powerful judge, while Alex Horne—the show’s creator—plays his servile sidekick, and admin guy. Over a few months, competing comedians are filmed taking on the tasks, separately and together. In each weekly episode, they sit on stage with Davies and Horne, and are shown what fools they have made of themselves, before taking on a live task on stage to decide the winner of that episode.

The tasks arrive in stiff paper with a crimson wax seal, but that doesn’t make them less ignominious. One from series 2 asked the participants to make the biggest mess and then clean it up. Comedians predictably splattered and vacuumed their hearts out but the slyest approach was taken by Katherine Ryan, who promptly called up her sister to inform her that her husband was having an affair.

Make the most exotic sandwich, said a series 4 task. Mel Giedroyc, host of The Great British Bake-Off, took this as a cue to throw all kinds of confectionery messily between bread slathered with Nutella. Loony genius Noel Fielding of The Mighty Boosh, however, interpreted “exotic” differently, tying slices of bread to Horne’s head and getting him to strip. This got slipperier once the participants were told they must actually eat the sandwiches they had created.

Pointlessness, more than anything, drives British variety entertainment. In the cleverest panel show, Would I Lie To You?, comedians must make bizarre confessions or pretend outrageous lies are true, and the cross-examined fibbing matters more than the scoreboard. Yet Taskmaster pretends that points matter—even though Davies dictatorially hands them out or withholds them—coaxing out an unlikely but inevitable competitive streak. Comedians love affirmation. They may not care about winning a gold replica of the Taskmaster’s head but because this show rewards wit and lateral thinking more than efficiency, they do find themselves wanting to shine.

Therefore this nutty show, where contestants have to paint a horse while riding a horse, begins to feel, strangely, like sport. Ten seasons of Taskmaster are streaming conveniently on YouTube, and I urge you to dive right in even if you don’t know the comedians participating. Over the last few weeks, I have gotten to know Paul Chowdhry, Tim Key, Jessica Knappett and (perhaps my top contestant of all) Mike Wozniak, while feeling better acquainted than ever with old favourites Bob Mortimer, Romesh Ranganathan and James Acaster. It doesn’t matter who you know. Or what. Nobody knows anything, really. That’s what Taskmaster teaches you.

Davies, a former schoolteacher and an intimidatingly tall man, sits on an oversized throne and pronounces judgement. He mocks feeble efforts, notes down things contestants say—every episode is named after a peculiar utterance: “A Coquettish Fascinator,” “The Lure Of The Treacle Puppies,” “My Eyes Are Circles”—and mercilessly creates running gags that may forever be linked to these award-winning talents.

Horne casts himself as a punching bag, for Davies to humiliate even more condescendingly than he would the contestants, and he gamely plays along whenever the contestants want to involve the task guy in their tasks. This brilliantly creates an official butt of all jokes. Even those contestants who keep messing up and constantly failing eventually stumble into an underdog role: The audience roots for them to win at least one episode. There are no such joys for the doormat character “little Alex Horne”, the creator presumably finding consolation in the show’s massive success and versions now being made in several countries (steer clear of the appalling US version).

Also read: The rise and rise of TV stars

I must confess to loving tasks from the earlier seasons more; they were worded with enough wiggle room for clever participants to find loopholes. But even when the tasks aren’t particularly cryptic or intellectually intriguing, the show is worth it because of the banter. Watching the comedians laugh at themselves and each other is like a casual, genial roast—call it a breakfast barbecue.

During the lockdown, Horne started a YouTube series called Hometasking, inviting fans around the world to perform tasks and send in videos for Davies to critique in his own cruel, warm way. These only prove Taskmaster’s appeal: The results spark joy even when we don’t know the participants.

In a recent series 11 episode, Davies commented on the way Mike Wozniak didn’t appear in the least bit fazed by the task ahead. “I just like to be told what to do,” said Wozniak, who really ought to play Thompson and Thomson in a Tintin movie. “Even if it is 'wrap a balloon saying ‘metronome’ and eat some poppadoms',” he smiles, “for the next five minutes, it’s easy street.” With the world as it stands, I can relate. We are all just chucking potatoes into holes. We are all hoping our tasks count for something, hoping that they make a difference, hoping for some wins, any wins. Hoping that our time starts now.