Vidya Balan plays a forest officer on the hunt for a man-eating tigress in Amit Masurkar's crisp, conscientious film 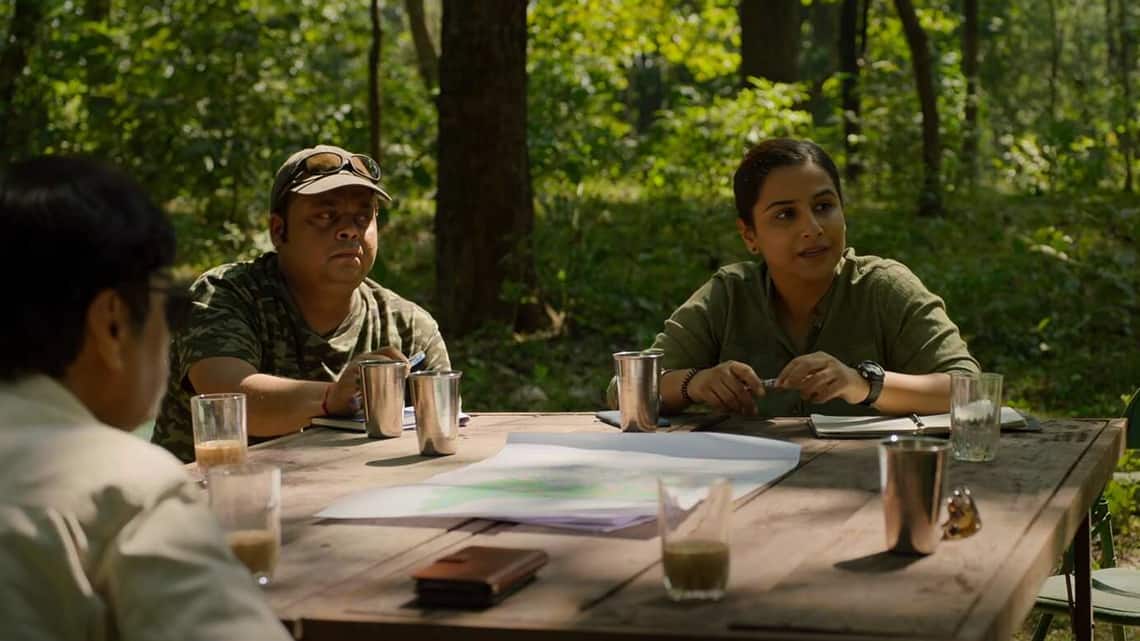 A bit of wordplay sets up Sherni beautifully. Bansal (Brijendra Kala), the head of the forest department in the sleepy outpost of Bijashpur, introduces a local teacher to his new divisional forest officer, Vidya (Vidya Balan), telling her in Hindi that the man is an expert on butterflies. “Moths,” the teacher, Noorani (Vijay Raaz), corrects him in English. “Maut (death)?” asks the confused Bansal. “Lepidoptera, patanga, parwana,” Noorani tries to explain. Bansal latches on to the last word, reciting a poem on parwanas. He and Noorani argue over whether the author is Ahmed Firozabadi or Faridabadi. Vladimir Nabokov, a connoisseur of both butterflies and cross-vernacular punning, would have approved.

This droll scene is Sherni in a nutshell: the fate of Indian wildlife being decided by stakeholders of wildly varying competence, the kind who know what lepidoptera means and ones who don’t distinguish between a moth and a butterfly. Amit Masurkar’s film is dotted with conversations like this, people talking at cross-purposes about the best way to stop a tigress who’s killed a few locals and is evading capture. Vidya and Noorani want it tranquilized and transferred to another jungle. The politicians want it taken care of, and bring in a private hunter, Pintu Bhaiyya (Sharat Saxena), to do the job. Bansal doesn’t care as long as his superiors are happy. The villagers have no good options: they're afraid to venture out, but they also need to earn a livelihood.

Though Bijashpur is a new posting, Vidya is nine years into the job, and tiring of it. She talks to her husband, who works in the private sector, about quitting, but he tells her to keep her head down and keep collecting a stable government salary. Yet it’s clear she isn’t that kind of person—she might complain, but she's incapable of phoning it in (to the extent that when her cook brings a stray kitten in, Vidya initially protests, saying she doesn’t like cats—a funny detail, given the film's built around her pursuing a tiger—but she's soon taking care of it).

The picture that emerges of wildlife departments in India is just as convoluted and compromised as that of Indian elections in Masurkar’s last film, Newton (2017). There's a lot that links the two films, structured as they are around low-ranking, principled civil servants who come to remote outposts and find their work impeded by corruption and government interference. Both films are alive to the intricacies and politics of the settings they inhabit, though both also have the outsider-saviour as protagonist (while Newton had a local viewpoint in the teacher Malko, Sampa Mandal’s villager here feels more like an afterthought).

One difference between Masurkar's second and third films is that, unlike election officer Newton, who’s schooled by Malko and strung along by the CRPF commander, Vidya is entirely competent and needs no lessons. She isn’t sanctimonious or a killjoy like Newton, yet the part of the journey where the audience grows in awareness along with the protagonist is missing. The gulf between capable (Vidya, Noorani) and incapable (Bansal, Pintu) is emphasized to the detriment of the film, most blatantly in a scene where the men get drunk by a campfire and start making animal noises.

Vidya is even-tempered and measured of speech, serious but not forbidding. Balan plays within herself, something she’s always done well. She’s deft in the small human moments: when her mother-in-law suggests she start a family, Vidya bats this away with practiced firmness. Still, a little boldness in casting might have been welcome. Balan as a smart, determined achiever, Neeraj Kabi as a smooth-talking morally compromised sort, Saxena as an angry pile of testosterone—these aren't bad choices, but they are unadventurous.

Sherni is at its best when trying to entangle the knots of Indian bureaucracy. Early on, Vidya tells Bansal that the land where villagers used to graze their cattle now has a teak plantation on it, which is forcing them to venture into the jungle. He tells her they have to plant one lakh trees every year by government decree, and this is the only fertile land. Cattle-grazing simply isn’t their problem, he explains. Aastha Tiku’s screenplay brings in a lot of detail—from environmental impact assessment studies to the intricacies of tiger tracking—but Masurkar and cinematographer Rakesh Haridas also find telling visual hints, like when Bansal is hiding from local politicians in a room filled with dusty, cobwebbed files, ordered by generations of babus just like him.

Sherni ends on a sombre note, as is only fitting. It’s always an uphill battle for those who seek to protect India’s natural heritage given the wavering commitment—and, often, direct interference—of its political masters. As the end credits roll, there are a series of closeups—exhibits of wild animals in a natural history museum. The import is clear: if we don’t change our ways, tigers will soon exist only in memories and rooms such as these.

Sherni is streaming on Amazon Prime.