Mumbai Film Festival: Set aside a week for cinema

The Mumbai Film Festival is back with its 19th edition. Here’s our guide to the big-hitters, the directors to watch, and why this year’s documentary crop looks especially strong

The 19th edition at a glance

Even in this age of unprecedented access to global cinema, there’s a difficult-to-replicate joy in watching films both obscure and celebrated on the big screen in the company of like-minded people. From 12-18 October, the JIO Mami Mumbai Film Festival With Star will bring world cinema to Mumbai’s cinephiles (and the faithful who’ve journeyed from out of town).

This year’s edition will have 220 films across a variety of sections. There are two competitive sections—India Gold and International Competition—with top prizes of Rs25 lakh each. The non-competitive sections include World Cinema, India Story (films from across India), Restored Classics, The New Medium (experimental films) and After Dark (“genre-defying" films), among others.

“It would be hard to put a finger on an overarching theme," says Smriti Kiran, creative director of the festival. “But if you were to zoom into different sections, probably you will find themes that run through each collective. Isolation and loneliness are a motif in International Competition, which hearteningly features six women film-makers this year. Across the board, the films are about people on the fringes of society instead of the ones who come from privilege."

Most of the line-up has been announced—it includes the 2017 Palme d’Or winner The Square. The day-wise schedule should be out soon. Those who aren’t attending would do well to examine what they can source on their own and stream in the coming months (several films from last year’s festival—The Salesman, Autohead, Aquarius, Elle—are on Amazon or Netflix).

Visit Mumbaifilmfestival.com for details and updates

What we’ll be queuing up for

The winner of the biggest honour in world cinema—the Palme d’Or at Cannes—this year was Ruben Östlund’s The Square. Expect queues from well before the start time for this acid satire.

Darren Aronofsky’s film has been setting the film world on fire, with reactions ranging from ecstatic to infuriated. The controversy, and the star wattage of Jennifer Lawrence and Javier Bardem, should see crowds fighting to watch a film some of them seem destined to hate.

Call Me By Your Name

This coming-of-age drama, written by James Ivory, looks as woozily sensual as Luca Guadagnino’s last film (A Bigger Splash, which played at Mami in 2015). It has been gathering ecstatic reviews and, even assuming it will release in theatres later, many will be keen to see an uncensored version on the big screen.

The Song Of Scorpions

There’s no trailer out yet, but the prospect of Irrfan Khan opposite Iranian actor Golshifteh Farahani should be enough to bring the crowds in for Anup Singh’s sophomore film.

The best director you probably haven’t heard of

South Korea is known for turning out directors who deal in brilliant, transgressive genre cinema. Hong Sang-soo is the exception to this rule. His films are talky affairs, with no genre affiliations (unless Éric Rohmer counts). Unlike other South Korean films, which are generally stunning to look at, Hong’s have an unadorned, documentary feel to them. Nearly all of them are concerned with tangled relationships, and many feature male characters who are directors, writers or students. His long, unhurried takes are deceptively casual, giving the impression that not much is going on even as his characters hand us the keys to their psyche.

He may not be as well known as his countrymen Park Chan-wook or Bong Joon-ho, but Hong is one of the major directors on the world stage. He has been nominated for the top prize at Cannes four times, three times at Berlin, and won both best film and best director at the Locarno Festival in Switzerland. If you’ve never watched a Hong film before, you’ll have three chances to do so at this year’s festival. The World Cinema section has a trifecta of titles by the prolific director. On The Beach At Night Alone, which won his frequent collaborator Kim Min-hee (The Handmaiden) best actress at the Berlin Film Festival this year, is the first. There’s the fascinating Claire’s Camera, shot during the 2016 Cannes festival, with Isabelle Huppert. And there’s The Day After, shot in black and white, nominated for the Palme d’Or at Cannes 2017.

A still from from ‘Quest’ .

Getting the Mumbai Film Festival programme together is a year-round job. Anu Rangachar, head, international programme, says one edition of the festival is barely over when scouting for the next edition starts. “We start researching and watching right after it’s done," she says over the phone. “The year technically starts with Rotterdam and Sundance (film festivals), but it’s an addiction for us."

This is Rangachar’s ninth year with Mami (Mumbai Academy of the Moving Image). She was part of a core team doing a bit of everything, from operations to establishing relationships with sales agents, but since 2014 she has been exclusively watching and selecting films. She and the other Mami programmers travel to top festivals to watch films and find out about forthcoming titles in the trade markets. They are also sent titles, either by the festivals or directly by the film-makers.

International Competition is a medium-risk, high-reward section for festival attendees: Since it’s only open to first-time film-makers, the titles aren’t always known to the public (the World Cinema section has the big names). But this also offers the possibility of a small film out of nowhere dazzling viewers and gathering word-of-mouth buzz. Rangachar says she keeps a look out for striking new voices. “I like political cinema—not literally political but films that take a stand," she says. She offers a few tips regarding this year’s line-up: “I Am Not A Witch is wonderful. Most Beautiful Island will surprise you. Bad Lucky Goat is a whacky comedy, lots of music. Quest is amazing—we started putting documentaries in competition from 2014. And The Wound touched me a lot."

Nothing’s better than the real thing

Fiction features may draw the crowds, but the Mumbai film festival has also given us superb home-grown documentaries in the last couple of years. Amit Madheshiya and Shirley Abraham’s The Cinema Travellers was one of the highlights of the 2016 festival, and a year before that, Shaunak Sen’s Cities Of Sleep and Abhay Kumar’s Placebo pushed the boundaries of the form. 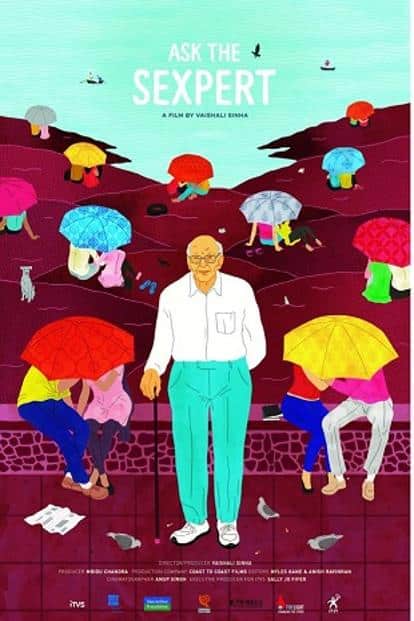 This year’s crop looks especially promising. Rahul Jain’s Machines won the cinematography award in the World Cinema-Documentary section at the Sundance Film Festival, and was nominated for the Grand Jury Prize; it will be having its India premiere next week. Vaishali Sinha’s Ask The Sexpert, a film on sexologist Mahinder Watsa, is a wry, funny look at a wry, funny man. If its trailer is anything to go by, Pushkar Puran (about the annual Rajasthani fair) looks as immersive and surreal as anything Kamal Swaroop (Om-Dar-B-Dar) has done. Anushka Meenakshi and Iswar Srikumar’s Up Down & Sideways, a musical documentary that looks at work songs in Nagaland, promises to be intriguing as well.

Apart from Indian non-fiction, there are also some fascinating-looking international documentaries at this year’s festival. Michael Glawogger and Monika Willi’s Untitled has the look of Kirsten Johnson’s acclaimed Cameraperson from last year. In Devil’s Freedom, Everardo González’s film about Mexico’s cartels, perpetrators of violence and victims alike wear masks with holes for the eyes and nose, forcing the viewer to examine each testimony without being able to put a face to it. Quest is just as formally ambitious, an intimate vérité look at a family in Philadelphia, US, shot by Jonathan Olshefski over a decade.