A couple in Kozhikode runs a special home for young girls, where they are loved, educated and taught art

“We are Fcommunal histories, communal books," wrote Michael Ondaatje in The English Patient. “We are not owned or monogamous in our taste or experience." Weera Kulppi, who studies the social sciences in Helsinki, realized that soon after arriving at the Sukritham Girls Home as a volunteer earlier this year—the home is a half-hour drive from Kozhikode, in the foothills of the Western Ghats. Kulppi learnt about Sukritham from a blog written by a former volunteer and decided that she wanted to experience it for herself.

Just how different Sukritham is becomes apparent when you get there. Perched atop a 2-acre area, it has plenty of space for the girls (aged 5-19) to cycle around and help tend the vegetables and fruits grown there. Most of the girls come from broken homes and abusive backgrounds, and have seen things no child should have to.

Inside the main building are dormitories, with bunk beds for the smaller children, and wall-to-wall bookshelves featuring both Malayalam and English titles. There is a fully equipped computer room, paid for by the classmates of Mahadev Prasad, who established Sukritham in 2006, and a huge auditorium on the roof where the girls are introduced to movies, music and public-speaking.

After arriving in May, Kulppi introduced art as an exercise to free the imagination and allow the girls to explore a boundary-free world. She gave them sheets of paper and colours, and asked them to depict happiness. “Three mountains, a palm tree and some birds," she says with a laugh. “That’s what almost all the girls drew. I noticed that some of them were quite stressed about it, as if afraid of failing a test. One of the girls, considered the most talented, drew trees for the others, while another helped place the birds. One girl asked her big sister to paint hers for her."

A painting titled ‘Breaking Free’, made by the girls.

A few months later those paintings became the centrepiece of an exhibition organized at a café in Kozhikode. Those who came to view the 40-odd pictures were invited to bid for them. The minimum amount was Rs800, but the frames—which showed everything from simple pastoral scenes to ambitious themes like Breaking Free—ended up fetching a six-figure sum for the home.

Prasad believes the paintings are a way for the girls to confront their inner demons and the trauma they have lived through.

He tells me of a seven-year-old whose siblings also live at the home. “She wants to be a police officer," he says. “And she wants that so that she can arrest the mother who abandoned her and her sisters." That little girl’s story is not unique. Several of the girls still maintain contact with their biological families, visiting them during the holidays, but the recurring theme is of single mothers without resources to educate their children, struggling to stay afloat in a society that judges them harshly.

Prasad runs the home with the help of his wife Prathyusha, and a handful of staff. The idea germinated in his college years. It was in 1991 that Kerala declared 100% literacy, but that number meant little when so many children had to drop out of the education system because there was no support structure at home.

“My friends and I used to go to slums and government-run homes to take classes for kids," he says. “You quickly realized that there were so many gifted children who simply couldn’t study because there was no atmosphere of learning at home. Most of the girls would stop studying after class VIII or so. The parents would say that if they were more educated, no one would come to marry them." 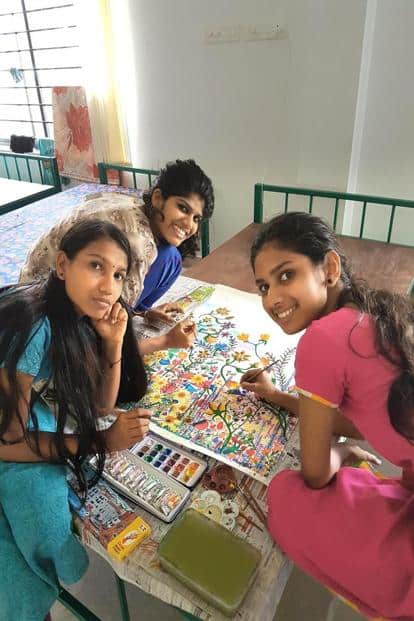 Working on a painting titled ‘Flowers For You, A Bird For Me’

Many of these girls, who were at the forefront of community activities like medical camps, also lived in fear, with mothers working odd hours and fathers often coming home drunk. Their families saw them as burdens, and any government-run homes that took them in mainly offered only food and a place to stay. “There is no emphasis on education as such," says Prasad. “It’s like they’re just kids who live off charity. Their hopes and dreams are secondary."

Prasad spoke to various organizations and wondered why more was not being done. The response was invariably the same. Girls were high-risk, and your reputation could be ruined if something untoward happened. His friends, however, told Prasad that if he started something, he would have their support.

Prasad runs the home with the help of his wife Prathyusha, and a handful of staff. The idea germinated in his college years-

One friend had an ancestral property lying vacant near the town of Naduvannur. It was there that Sukritham started off, with one girl. She was from the tribal community in Wayanad; her mother had remarried after her father died. A police officer, whom Prasad knew, arranged for her to come to Sukritham once they learnt that she was just staying home looking after the children from her mother’s second marriage.

More than a decade on, as much as the cost of running the home, it’s the prevailing mindsets that Prasad and his friends have to battle. “Most of the calls we get, three or four a day, are regarding marriage proposals," he says. “We try to encourage the girls to think beyond that, to think of what they would like to be as individuals. They know that in some cases, their mothers had to leave them here not because of a lack of affection, but because they didn’t have the wherewithal to run a family. Once they learn a skill and work a little, they’ll understand what life is. Marriage, if they choose it, can come after that." Girls working on a painting at the home.

The first girl he took in is now 19, and studying law in Thrissur. “In their community, girls are often married by the time they’re 13 or 14," says Prasad. “She’s the first law graduate they’ll have. Just seeing her there is a big motivation for other girls. She wants to become an advocate, and work in government service."

The evening the exhibition closed, the girls were taken to the beachside café in a bus. The idea that their art was so prized was a revelation for most of them. The younger ones fussed over Ekku, Kulppi’s four-year-old son, while the older ones sang along with a couple of young men strumming their guitars. For many of them, the mental scars will take years to heal, but the paintings on the wall were proof of just how far they had come.

As for Kulppi, who went back to her studies earlier this month, the girls became her family 4,000 miles from home. And what started off as a simple assignment ended with young minds breaking free.