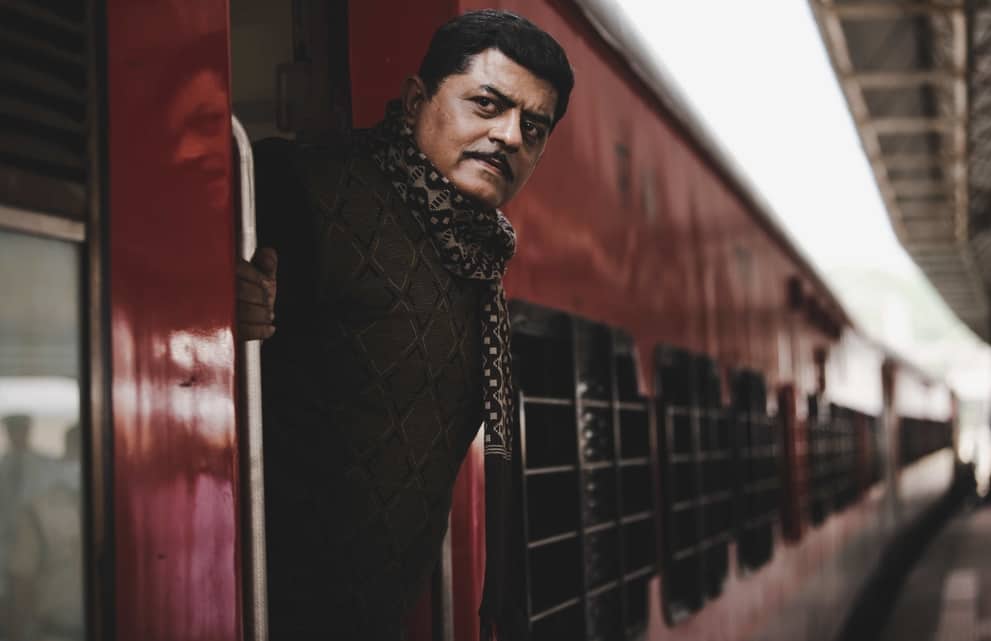 If Gajraj Rao had his way, he would have never left Delhi. “Whether it was my theatre group, Nathu Sweets, the lawns at India Gate, the street food outside Regal, or evenings in Mandi House, I was really happy in Delhi,” Rao says. The actor, who recently appeared in Abhishek Chaubey’s Hungama Hai Kyon Barpa—a segment in the Netflix anthology Ray—shows a zest for life’s finer things, just like his character, Aslam Baig. Rao’s character prefers pieces of dried lime in his tea, and even sings about how roads that lead him to a drink make him happy.

Rao’s role as Aslam Baig a.k.a Jenga Pehalwan is inspiring hand-drawn caricatures on Twitter, something Rao claims is happening for the first time in his career of over 25 years. A film where Rao’s mischievous screen presence takes centre-stage has been a long time coming. Set in a train carriage for a majority of its run-time, Hungama unfolds like a battle of wits between two strangers who can’t seem to place each other. What lends itself perfectly to the suspense is Rao’s hard-to-read face, one that effortlessly goes from a passive-aggressive smile to genuine rage in a matter of seconds. “One of the best compliments I got from a friend was that it reminded him of Shatranj Ke Khiladi. That film too had a similar jugalbandi between Sanjeev Kumar and Saeed Jaffrey,” says Rao.

Chaubey says he could watch a film only because Rao is in it. “There’s something classical about him, I can imagine him in a movie with Sanjeev Kumar or Utpal Dutt. His performances never look laboured,” says Chaubey. While Rao admitted the character of Baig was challenging for how “straight” he is (at least on the surface), Chaubey goes on to add, “He played Baig with wit and innocence, which really helped the character.”

Rao’s family moved from Rajasthan to Delhi when he was around five years old. “For some reason, they (my parents) thought that I would become a diligent student once we moved to Delhi,” says Rao . Asked how he chose the path of acting, he replies: “after a lot of drifting.” Rao spent his years as a late teen working in stationery shops, as a freelance journalist, even mulling over the idea of pursuing chartered accountancy. He interviewed Yash Chopra once, when he was in Delhi. “Me and my photographer friends used to meet at Nathu Sweets and discuss which celebrity was in town, and we would cold-call them. Most of them were nice about it,” says Rao.

Then one evening in Delhi’s Mandi House, everything changed. “I remember being mesmerised by this play called Jeevan Sandhya where two 20-something actors played the part of an elderly couple, where they talked to each other for two hours on stage without any visible prompting,” Rao says. It sparked in him the fire to be a theatre actor. After some deliberation he found his way to N.K Sharma’s now-famous theatre group, Act One, where he met the likes of Manoj Bajpayee, Piyush Mishra, Shefali Bhushan, Ashish Vidyarthi, among others.

It was during his time as a part of Act One that Rao was introduced to some of the world’s finest literature. “These were all padhne waale log, so they would tell me about books, and even where to find the best Hindi translation for it. We discussed poetry, regional literature, it was almost like a club rather than a theatre group,” he says.

Rao began working with Siddhartha Basu’s Synergy Communication, where he would ‘warm up’ the audience with mock quizzes. He went on to work for TV18 channel, where he would translate non-fiction English shows into Hindi.

He still remembers the excitement of filming Shekhar Kapur’s Bandit Queen (1994)—“I wasn’t able to sleep the night before. This was the first time I had signed a contract for an acting job.” Like any other debutant, Rao felt overwhelmed on set. Then he felt a hand on his shoulder. It was Kapur. “He almost slowed things down for me, with the chaos of 200 people around us. In a few minutes, I felt like I had a personal stake in the film. It changed my life,” says Rao.

It was when he began working as Pradeep Sarkar’s assistant, in the late 1990s, that Rao dabbled in advertising for the first time. Initially hesitant about an industry where everyone seemed to be wearing expensive clothes and perfumes, Rao realised this was his calling a mere two months later.

He moved to Mumbai in 2000, starting his own ad film production house', Code Red Films. “I had seen many of my friends get completely demoralised by the ‘struggle’ in Mumbai. I knew that was something I wasn’t going to do,” says Rao.

It was probably his ability to think like a copywriter that enabled Rao to deliver his most memorable moment on screen in Anurag Kashyap’s Black Friday (2007). Playing the role of Dawood Phanse (with a screen-time of under 10 minutes), Rao delivers the film’s funniest scene when his character is about to meet Dawood Ibrahim, and he keeps rehearsing his “greeting” in front of a shut door. When Ibrahim and Tiger Memon suddenly open the door, Phanse blurts out his greeting, confounding everyone. “I asked Anurag (Kashyap) if I could improvise in the scene by mumbling nervously, and his eyes lit up. He gave me the go ahead, and I just came up with it on the spot. Vijay (Maurya) and Pavan (Malhotra) had no idea what I was going to say. To Anurag’s credit, he didn’t say ‘cut’,” recounts Rao.

After small but significant roles in films like Talvar, Love Per Square Foot and Blackmail, Rao found popularity on the web in The Viral Fever (TVF) shows like Tech Conversations With My Dad, F.A.T.H.E.R.S and Tripling. This fame coincided with the gargantuan success of Amit Sharma’s Badhaai Ho, where he plays a middle-aged man trying to come to terms with an unplanned pregnancy with his wife (Neena Gupta). The film grossed more than ₹200 crore (worldwide) at the box office. “I was outside a bookstore and this 13-year-old came up and asked, ‘Are you the same guy from the Twitter video?’ I got nervous and said ‘yes’, that kid turned around to his group and screamed, ‘He’s the same dude!’ I was really surprised,” Rao says. He still hasn’t gotten used to compliments from strangers, or to giving interviews.

And that’s why he doesn’t bother with ‘silly’ questions about whether he’s getting typecast in the role of a ‘father’. “If the ‘father’ role has a profession that gives them more texture. Like my role in Shubh Mangal Zyada Saavdhan, I’m playing this senile man who is also an Allahabad-based horticulturist, something I’ve never played before. I have to choose the best from what’s offered. Mind you, Aslam Baig is one of them,” says Rao. The last 18-24 months have seen the most scripts Rao has ever seen in his career. “This respect that writers and directors are thinking about you while writing their scripts, khoon badh jaata hai yaar.”