Every jazz lover has a favourite version of A Night In Tunisia, the tune that trumpeter Dizzy Gillespie wrote in the early 1940s and one that became a jazz standard. Those were the early years of bebop, a style of jazz marked by solo instrumental virtuosity, improvization and frequent deviations from the basic melody. In his memoirs, Gillespie—who died in 1993 at 75—recounts how it began as a tune with a Latin or Oriental feel to which he added a bebop rhythm. Many, many musicians have their versions of the tune, including those by Ella Fitzgerald and Sarah Vaughan, which have lyrics sung by them.

My own all-time favourite version of A Night In Tunisia is on the 1953 album Jazz At Massey Hall. That album is a live recording of a gig that is often referred to as the “greatest jazz concert ever". Held in Toronto, the quintet playing the gig was star-studded and comprised Gillespie on trumpet, Charles Mingus on bass, Charlie Parker on alto sax, Bud Powell on piano, and Max Roach on drums. Each one of the seven tracks on the original album is excellent and every lover of jazz probably has a copy of it in his or her collection. But last week I heard a version of A Night In Tunisia that I instantly loved. Gillespie doesn’t feature on it; neither do any of bebop’s early giants, such as the ones in the quintet that played Massey Hall. In fact, it is a very recent version, recorded last year by Tony Allen on his album A Tribute To Art Blakey And The Jazz Messengers.

Allen, now 77, was the drummer in legendary Nigerian musician Fela Kuti’s band and co-founder (along with Kuti) of the genre known as Afrobeat, the vigorous and vibrant style that is a hybrid of African highlife music and Western jazz and funk. Last year’s tribute to the late jazz drummer, who was a sort of hero to him, has four popular tunes that Art Blakey and Jazz Messengers used to play: Moanin’, A Night In Tunisia, Politely and Drum Thunder Suite. As I mentioned, the list of musicians who have their versions of A Night In Tunisia is long, and includes, besides Blakey (who made it a regular part of his set-list), legends such as Miles Davis and saxophonists Dexter Gordon, Stan Getz and Sonny Rollins. Even Chaka Khan has sung a funk version of it.

But Allen’s reinterpretation stands out. He starts with a drum solo that lays down an Afrobeat rhythm before the bass kicks in, followed by the horns and piano. On the album, Allen’s band has eight musicians, including a trombonist, a trumpeter, three sax players, a pianist and a bassist. Now based in Paris, Allen (like his former bandleader, Kuti) was hugely influenced by American jazz in his early days in Nigeria. And iconic jazz drummers such as Blakey and Max Roach were his idols. It was, in a sense, a two-way street really, because Blakey too spent time visiting Africa and exploring the music and beats; their influence is evident in several of his albums. Many consider Blakey to be one of jazz’s greatest drummers and there’s a nearly 15-minute video on YouTube that features solo trade-offs between him and rock’s famous drummer Ginger Baker. The video is grainy and the sound quality could have been better but if you check it out you’ll see just how stunning Blakey was. 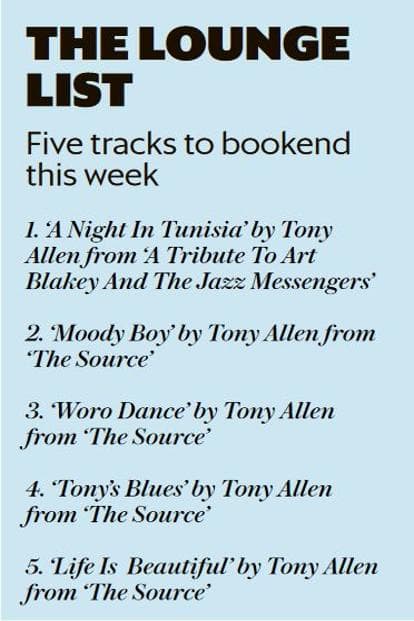 Allen is equally astonishing. The tribute album is just 25 minutes long but his pulsating, polyrhythmic style of drumming makes it an extraordinary listening session that can leave you yearning for more. That’s when you should reach out for another of Allen’s albums, The Source, which also came out last year. Clocking in at 65 minutes, The Source is satisfyingly long and features 11 tunes. Allen’s band for the album is also big—it has 11 members, and, besides the drums, multiple horns and piano, there’s an organ and a guitar. It’s Allen’s first full-length record to be released on the famous Blue Note label and it is captivating. Unlike the tribute album, The Source only has original compositions, and from the first bars of the opening track, Moody Boy, it takes the listener on a trip to musical bliss. With 11 musicians playing instruments, including a tuba, several saxophones and trumpets, the sound is dense but remarkably elegantly crafted.

On an album as good as The Source, it is difficult to select standout tracks but by the time you reach Tony’s Blues, roughly in the middle of the record, you start wondering how massively talented Allen, who is closing in on 80, is. The funky high energy of The Source recalls the highlife sound of Kuti’s band; and yet, woven in with that are the idioms of Western jazz and funk. Allen’s drum solos are so fluid that they sound like he has magic in his sticks and his exceptionally good band, notably Yann Jankielewicz, who plays the alto, tenor and baritone sax, and is co-composer of most of the tunes, creates a sweepingly wide soundscape that is also incredibly delicate.

The Source has been surfacing repeatedly on my playlist but Allen has many more albums to explore, including 2006’s Lagos No Shaking, 2014’s Film Of Life, and, of course, Kuti’s formidable discography when Allen was playing with him. He himself, however, considers The Source his best album till date. In my view, it is also indispensable for music lovers.

Respond to this column at firstbeat@livemint.com.