In spite of widespread closure of bookshops across the world, Bengaluru's Church Street remains a haven for booklovers

Running roughly for a kilometre, Church Street is a busy thoroughfare in the heart of Bengaluru’s business district. But for bibliophiles, from the city and beyond, it is a pilgrimage trail—one that involves stopping by half a dozen bookstores and ends with a cup of coffee at the legendary Koshy’s café on nearby St Mark’s Road.

Church Street may not have the upmarket elegance of Mumbai’s Kala Ghoda, the hipster swag of Delhi’s Hauz Khas Village, or the old-world dreaminess of Kolkata’s Park Street, but it has books. Tourists and visitors to the city seek it out the way they do Mumbai’s Flora Fountain, Kolkata’s College Street, or Delhi’s Daryaganj. But this Bengaluru book trail remains unique for its proper brick-and-mortar stores, rather than makeshift roadside stalls.

On any day of the week, these shops are buzzing with buyers and sellers of used books—a heartening sight at a time when the death knell for physical stores is being sounded all over the world. Call it an oasis for bibliophiles if you will, but the Church Street book stores are also up against an unromantic reality: behemoths like Amazon and chain book stores offering jaw-dropping discounts and delivery services.

In spite of the competition from external forces and each other, these book stores retain a starkly traditional character. Be it Bookworm, the two Blossom Book Houses, Gangaram’s Book Bureau, Goobe’s Book Republic, or Bookhive (the newest entrant to Church Street), these shops are filled with books—from wall to wall, floor to ceiling, used, new, first editions, antiquated, or procured on request. Not for them the frill of merchandise or counters dedicated to selling e-readers.

A survey conducted by Amazon India for the year 2017 placed Bengaluru ahead of Mumbai and Delhi as India’s most well-read city. Although the report was based on online sales trends, Bengaluru’s eminence in the list is convincing.

Chain retailers in the city like Sapna Book House and Higginbothams (a refurbished outlet opened last year on MG Road, a stone’s throw from Church Street) mostly cater to a mixed market for popular titles, utilitarian textbooks, stationary and e-readers. The Church Street booksellers, in contrast, provide unadulterated indulgence: literary fiction and non-fiction, across a range of subjects, spanning decades. Apart from the front-list of major publishers, these include titles passed through many hands, their pages musty with age, scribbled over with marginalia, with forgotten flowers, the odd love letter or a crumpled laundry bill keeping time. It’s an alternate universe for seasoned booklovers.

Krishna Gowda, who owns Bookworm, says he was always obsessed with books. “In 1997, I started selling on the pavement on MG Road," says the man who comes from a small village near Mysuru. “In 2000, I opened a shop there, before we moved to Church Street in 2007." About 75% of Bookworm’s stock is used books, he adds, with history, literature and biography forming the store’s backbone. Like all the shops in the locality, Bookworm offers 15-20% discount on new titles, and 50% “store credit" for returning old books.

Further down the road is the new Blossom Book House, which opened in 2016, says its proprietor Mayi Gowda, to complement the old store, with its empire of books spread over three storeys. “We used to have such crowds during the weekends that it was impossible to move around," Mayi Gowda says, sitting on the first floor of the old shop. “So we decided to open another space."

Like Krishna, Mayi began with selling books on the streets. “I worked at a day job for 10-15 days, but my mind was on books," he says. In 2002, he opened the first Blossom store in Brigade Gardens, an office complex, before moving across the street to the building it currently occupies since 2004.

Blossom, too, boasts of an eclectic collection, including a dedicated section on comic books and graphic novels. Collectors’ editions of Charles Schulz’s Peanuts, Bill Waterson’s Calvin And Hobbes and priceless copies of Marvel Comics jostle for space alongside stashes of crime and literary fiction. Airy and more spacious, the new store is primarily focused on current titles, and is often able to source books from the US or the UK on demand. 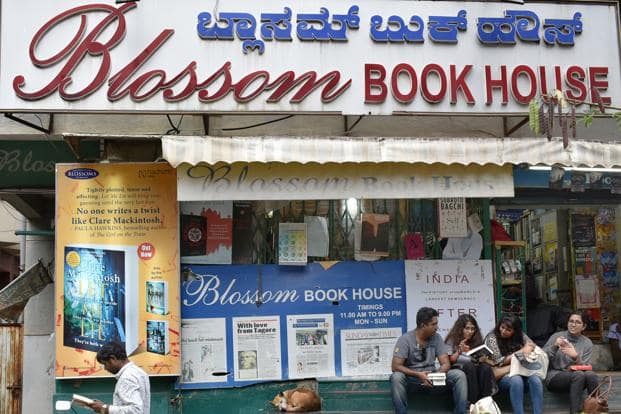 Behind the steady success of Bookworm and Blossom looms the shadow of one towering Bengaluru institution: the Premier Book Shop, once the star of Church Street, now forever alive in the hearts of its patrons, especially the intelligentsia.

The most affecting eulogy for T.S. Shanbhag’s establishment comes from writer Ramachandra Guha in an anthology entitled, Multiple City: Writings On Bangalore. Writing shortly before the iconic bookshop shut down in 2009, Guha weaves a tapestry of personal memories. Shanbhag, nephew of T.N. Shanbhag of Mumbai’s (now-closed) famous Strand Book Stall, was not only an astute businessman but above all an inveterate bibliophile. “He excelled at matching his customers to books," says Guha.

In the essay, he writes about his then girlfriend (now wife Sujata Keshavan) taking him there to buy a parting gift before he left for Kolkata to pursue a Ph.D. After getting him a copy of Isaiah Berlin’s “intellectual biography" of Karl Marx, she gave him a peck on the cheek, which, “by the social norms then prevailing" was “outrageously provocative." “Unfortunately, she was caught in the act by the bookshop’s owner, who turned a deep shade of red in consequence," Guha recounts. Years later, he would find a rare edition of D.G. Tendulkar’s eight-volume biography of M.K. Gandhi, first published in the 1950s, at the same book store, complete with rare photos and printed in handmade paper. An asset for any booklover, it stood out for Guha, the newest biographer of Gandhi, with a special significance.

Scholar and translator Arshia Sattar also remembers her attachment to Premier and “Mr Shanbhag"—the name he was universally known by. “When my translation of the Valmiki Ramayana was published in 1996, for years, it had a slow start," she says on email. “Every now and then, I would go in to (Premier’s) to buy a copy, and Mr Shanbhag would laugh and say, ‘Only you are buying your own book, come tomorrow, I have to get it from the godown.’" When Sattar went back the next day, he always had more than one copy. “Maybe someone else will also buy, so I brought one more copy," he’d say.

Younger booksellers like Ravi Menezes, who runs Goobe’s, mention Mr Shanbhag with a touch of reverence. “We opened a week after Premier’s shut down in 2009, in the middle of the economic recession, defying all good sense," he says. “So we decided to call ourselves Goobe, which means owl in Kannada, but is also used as a pejorative for a foolish person."

Goobe’s is tucked away in a basement. You could almost miss it, were it not for the signage and a board that says “Books This Way". “It’s an indie bookshop in the classic sense," says Mathew Idiculla, a Bengaluru-based lawyer who abjures buying books online to support physical book stores. “The collection at Goobe’s is curated by its owner’s taste." Menezes also deals in new and used books, but is known to have an extensive collection of sci-fi and fantasy fiction. His shop also gives front display to several quirky zines.

Goobe’s accepts books from private collections and offers discounts like the others in the neighbourhood. “We take books from raddiwallahs," Menezes says. “People die, relocate, children grow up and go off to college, couples fall out or divorce," he says, enumerating the channels via which books come into his hands.

If the pleasure these booksellers take in their work is palpable, their apprehension for the future of their profession is no less obvious. A few minutes walk away, in an alley off Brigade Road, is the Select Book Shop, started in 1945 by K.B.K. Rao, now a hole in the wall with hundreds of books and magazines lying in disarray, run by his son K.K.S. Murthy and grandson K. Sanjay. Still sought out by regular patrons for old editions, it now depends on word of mouth for business, says Sanjay.

Gangaram’s Book Bureau, occupying one floor of a building on Church Street, dates back to 1977, when it opened a multi-storey store on MG Road. “We were badly hit around 2011, as e-commerce took off," says Prakash Gangaram, the owner. As real estate prices soared, the shop moved to a smaller space on Church Street. Gangaram wants to buy a larger property on MG Road at some point, rather than deal with the whims of landlords.

Although it doesn’t trade in used books, Gangaram has a stock of about 50,000 titles, trade and academic, and is happy to source from abroad on demand. “We have only one door for entry and exit even though the store is divided into trade and educational sections," says Gangaram. “I wanted to ensure we remain a personalized bookshop, where a customer can walk in and speak to me directly in case they need any advice."

In spite of the rough weather in the industry, bookselling continues to exert its pull on the younger generation. Keshav R., Krishna Gowda’s brother-in-law, is the latest entrant in the biblioverse of Church Street. Having worked at Bookworm for seven years, Keshav opened Book Hive on the first floor of a rented property a few yards away from his former employer a couple of weeks ago.

Although he’s based his business on the same model as Bookworm’s, Keshav says he doesn’t feel anxious about competition. Bookshops like his, and the others around, have always depended on word of mouth and the delight of discovering a book out of the blue. “You can spend hours in shops browsing physical titles. For some readers that pleasure is still paramount," he says.