Suresh Raina on his enduring friendship with MS Dhoni

In an exclusive extract from Raina's soon-to-be-published memoir, he opens up on his long and close friendship with Dhoni 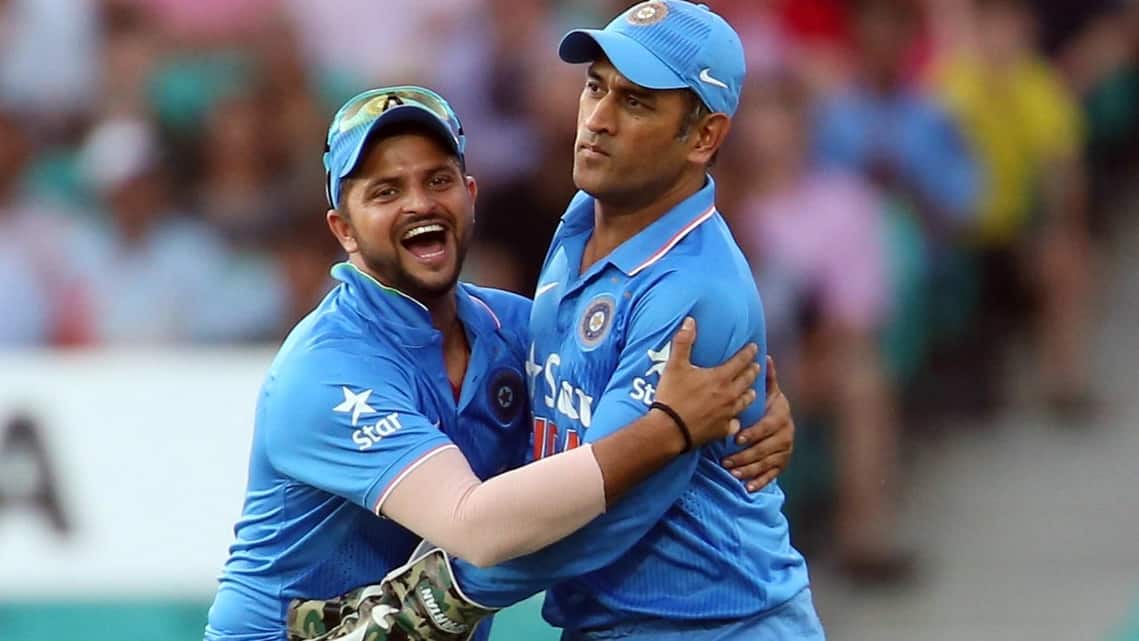 Suresh Raina and MS Dhoni at a T20 match against Australia in 2016. (Getty Images)

I really can’t pinpoint the exact moment when Mahi Bhai and I hit it off. Neither of us can recall a fixed date. It just happened. It was organic. I know people out there often say that our names are uttered in the same breath in Indian cricketing circles. For us, though, things just clicked the moment we met.

I remember when that was. I came across M.S. Dhoni for the first time during a Duleep Trophy match in Gwalior. It was February 2005, and I was representing Central Zone against East Zone, with Mahi Bhai as their wicketkeeper. He was quite a sight to behold. The long hair, the confident attitude, the self-belief and his hard hitting. He had already made his international debut at that point, having played three ODIs in Bangladesh. But he had not made much of an impact. Neither of us scored too many runs in the game at Gwalior, but he did take my catch behind the wickets in the first innings.

We had both come into the limelight the previous year. His rise to stardom came through his exploits for India A in that famous series in Nairobi. That was around the time I was in Australia for the Border–Gavaskar scholarship. We didn’t get to interact much during that Duleep Trophy match. But in him, I saw someone very similar to me, someone I could relate with. He was shy and reserved when not on the field, just like me.

We met next at a senior Indian team camp in Bangalore. It was my first time being anywhere near the names I had grown up idolizing. Mahi Bhai was there too. And we bonded immediately. There were a few others as well, like J.P. Yadav, L. Balaji, Irfan (whom I knew from my under-19 days) and Niraj Patel. We become a tight-knit group.

Mahi was the closest to me, though. We both came from small towns, we had similar family backgrounds and we were both sons of the soil. We liked desi things. And when you’re away from home, it’s natural to look for someone with whom you can share dil ki baatein. Mahi Bhai was that person for me. From very early on, I could talk to him about anything. He’s not a man of too many words, but he’s a great listener and that helped strengthen our bond. We connected as cricketers and, more importantly, as friends.

We even started sharing rooms and would always be together for, say, embassy dinners or those social team events in the early days. We also were both terrified of fine dining back then. We always preferred going to food courts when overseas or to dhabas when in India. We felt a lot more comfortable there. The thing with fine dining is to know exactly how to use the spoon and fork, not to forget the different variety of knives. It was all too stressful. We would stick together and try and learn by looking at others. It’s part of being an international sportsperson and representing your country. There are things expected of you not just on the field but off it too. Being presentable and following certain etiquette is all-important. Things like wearing a coat and going for embassy dinners. You can’t just say that you know how to play all the shots and score runs for your country. How you handle yourself when not playing is equally important.

With time, you start getting more exposure, and your society and lifestyle changes. But at his heart, Mahi Bhai is still very desi. Whether it’s the food or the breeds of dogs he likes, or the music he listens to, he prefers Indian things. I am the same. We are also not much into dikhava (showing off ). It’s always more about keeping it simple and real.

I was heartbroken about missing the 2007 World Cup and the World T20 that followed. That event in South Africa, as we know, was the beginning of the M.S. Dhoni era in Indian cricket. We stayed in touch throughout that period, even as I continued to recover from a surgery. Rahul Bhai, Sachin Paaji and Mahi Bhai were the ones who were constantly in touch with me during that tough phase.

Also Read: How local is your IPL team?

Even though Mahi Bhai was a superstar by the time we were back to sharing the dressing room again, our relationship stayed the same. His stock grew even more a few months later, when he led India to the CB Series triumph in Australia. I was part of the Indian squad for the CB Series. It was my comeback from the long layoff caused by the knee injury and surgery.

Subsequently, the IPL auctions happened, and like every other cricketer in the country, I was waiting eagerly to know which team I would be playing for. I was elated to go to the Chennai Super Kings. It meant Mahi Bhai and I would be playing for the same team. I heard from him almost immediately after I was bought in the auction. He said, ‘Maza aayega dekh.’ There was a lot of attention on him, of course. And looking at some of the other figures whom Chennai had bought—Matthew Hayden, Muttiah Muralitharan and Stephen Fleming—I was just delighted to be in the same team as them. The IPL strengthened my bond with Mahi Bhai even further.

Initially, we spent a lot of time with each other in and around the hotel in Chennai. Then, once we became familiar with everything that the city had to offer, we started exploring Chennai in our own ways. I had my yellow sports car, and he had his bikes. Hayden used to go surfing. We became one big family. In Chennai, Mahi Bhai and I are actually referred to as ‘Thala’ (Tamil for ‘Chief’) and ‘Chinna Thala’ (‘Deputy Chief’), and it means a lot to me.

Through it all, Mahi Bhai has always been there for me. He has also been around for all the major moments of my career, right from the start…

Also Read: The innings that inspired India to greatness against West Indies in 1971

There’s always a lot of talk about Mahi Bhai being Captain Cool. But I can tell you that is not his greatest strength as captain. He will never compromise on the game. That’s what I like about him the most. That’s what I think makes him such a legendary captain and a fantastic leader.

You could not take any game lightly and nobody could have fun at the expense of the game. He was emotional about playing for the country. ‘You are playing for your country. There can be no excuses,’ he would tell us.

Masti only after the match was done. That was a standout feature about him. From the moment the national anthem was sung, you were representing the tricolour. This was serious business. There was no room for relaxing, even if he might look like the most relaxed cricketer in the world. For him, it didn’t matter which player was winning the game for the country, till the time India won. That was why he kept out of the limelight after we won, even after the World Cup.

I don’t think he ever changed as a cricketer. His attitude towards cricket has never changed. His priorities have always stayed the same. He has stayed a simple person, and that’s why God has been so kind to him.

Extracted from Believe: What Life And Cricket Taught Me by Suresh Raina with Bharat Sundaresan. The book will be out on 14 June.