Set in a council estate in north London, spanning 48 hours, exploring the inner conflicts of three teenagers—Selvon, Ardan, and Yusuf—Guy Gunaratne’s electrifying debut, In Our Mad And Furious City, is not your average Bildungsroman. Football, infatuation and fiery music are punctuated with riots, the resistance to Islamic radicalization, and the author’s playful, poetic prose.

A film-maker and video journalist covering post-conflict zones, the London-based Gunaratne’s urban debut was welcomed with early praise by writers Gautam Malkani and Kit de Waal and compared with Zadie Smith’s NW and Kate Tempest’s The Bricks That Built The Houses. Shortly after its publication earlier this year, Gunaratne wrote a personal essay in The Guardian, where he poignantly spoke about his family history, inheriting a story, and identity—about how his Sri Lankan father learnt English by reading books in the same London bookshop that now sells his book.

In an email interview, Gunaratne elaborates on his literary influences, love for language, and lays down the “soundtrack" for his novel. Edited excerpts:

The 2013 murder of (British army soldier) Lee Rigby is a springboard for the prologue and the plot of the novel. Would you say that this was your immediate prompt to write it?

Yes, a definite prompt. I write about what animates me, mostly. There was a recording that emerged in which Lee Rigby’s killer Michael Adebolajo spoke to a passer-by about his motivations. The initial—and entirely reasonable—response to an event such as an attack is collective paralysis, to disassociate ourselves from the attacker and paint them as entirely inhuman monsters. We tend not to dwell on the fact that many of these young men were home-grown local lads before they became radicalized. My own response to Michael Adebolajo, however, was one of identification rather than repulsion. The language he used, the road dialect he spoke with, reminded me of the young men I grew up with. I wanted to interrogate that. I wanted to ask what it is about our proximity to violence in a culture so saturated with extremism that has made us increasingly susceptible to our own extremes, our own “small furies", as it is termed in the book.

One of your characters, Selvon, is named in a nod to Sam Selvon, writer of ‘The Lonely Londoners’. Does his novel hold a special spot in your bookshelf?

I’ve always been drawn to uncompromising interpretations of language. Yes, Samuel Selvon, but also James Kelman, who wrote in the Scots dialect. Junot Diaz is another example. Even (William) Faulkner, who wrote in the dialect of the American Deep South. All these writers encouraged me with their work to try and approach voice with rhythms and energy in mind.

Your book is very much a city novel, and while London is described as “bone-cold", “mad and monstrous", “lunatic", it’s also a city you come to love. Is your book, then, a love letter to London, a celebration, a prayer, maybe even a eulogy?

Possibly all of the above. There is a line that describes the city and its people as being “made of many". To write about London is to write about what that “many" means for those who live there. It compelled me to write about the friction, the many fractures, but also the beautiful within its margins.

Critics have mentioned the benefits of reading ‘Mad And Furious’ out loud, as spoken word poetry. The London slang and several Englishes, the polyphonic style, and the suffusion of grime, allow for histories and stories that are cyclical (in chapters) and ultimately come to a head. It creates an interesting reading tempo. Could you share some thoughts on your writing process?

This is one of those odd, mysterious things I can’t fully articulate. The closest thing I can describe to the process of writing this book is that it was like the act of focused listening. Writing five voices is difficult. The process was really just writing each character consecutively, in full, and then threading them together against a thematic arc. I wrote each in full because I was mindful of consistency. I wanted to be listening to only one voice at any one time during the writing. Blending them together afterward...was more a case of making sure the peaks of the narratives aligned. Reading the book after that involved yet another listening method—at that point I’d be listening out for the echoes between each voice and how each story interacted.

One sentence from your essay in ‘The Guardian’ stayed with me, in particular: “It’s a quirk, I think, of having both an immigrant and a Londoner for a father; I share his sense of being a resident alien in my country while also being a native son." Can you speak about this in the context of the phrase, “For those of us who had an elsewhere in our blood" from your novel?

I think in both cases I was trying to articulate the feeling of dissonance between place and relationship to the past through previous generations. That inheritance can either offer richness or act as a constraint. Each voice in the novel seems to examine that inner conflict.

You were among Ali Smith’s best debut fiction writers of 2018 at the Cambridge Literary Festival. Can you recommend some debuts you’ve read recently?

I’m not very good at keeping up with contemporary fiction, although I thought Édouard Louis’ The End Of Eddy was fearless. The short story collection, Attrib. (And Other Stories), by Eley Williams, also felt fresh.

If you were to provide a soundtrack for reading ‘Mad And Furious’, what would it be?

I think anything by Young Fathers. Their music appears to have found the sound of a mad, crashing, globalized city. To this, add all the music referenced by Ardan in the novel, Kano’s most recent album Made In The Manor, for example, or anything by Akala. 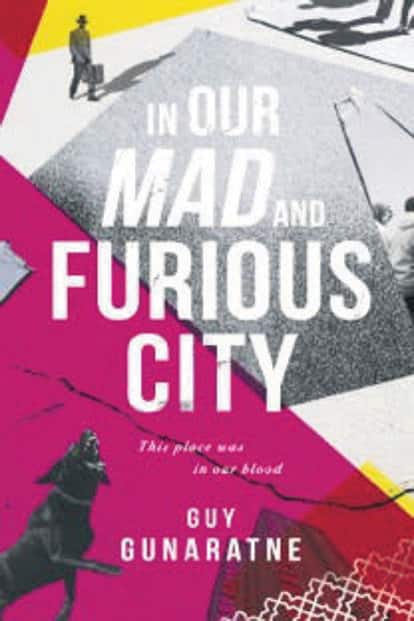