Fear and triumph on Mount Everest

Mountaineer Jim Davidson nearly lost his life in the 2015 avalanche on Mount Everest. Two years later, he returned to attempt the summit 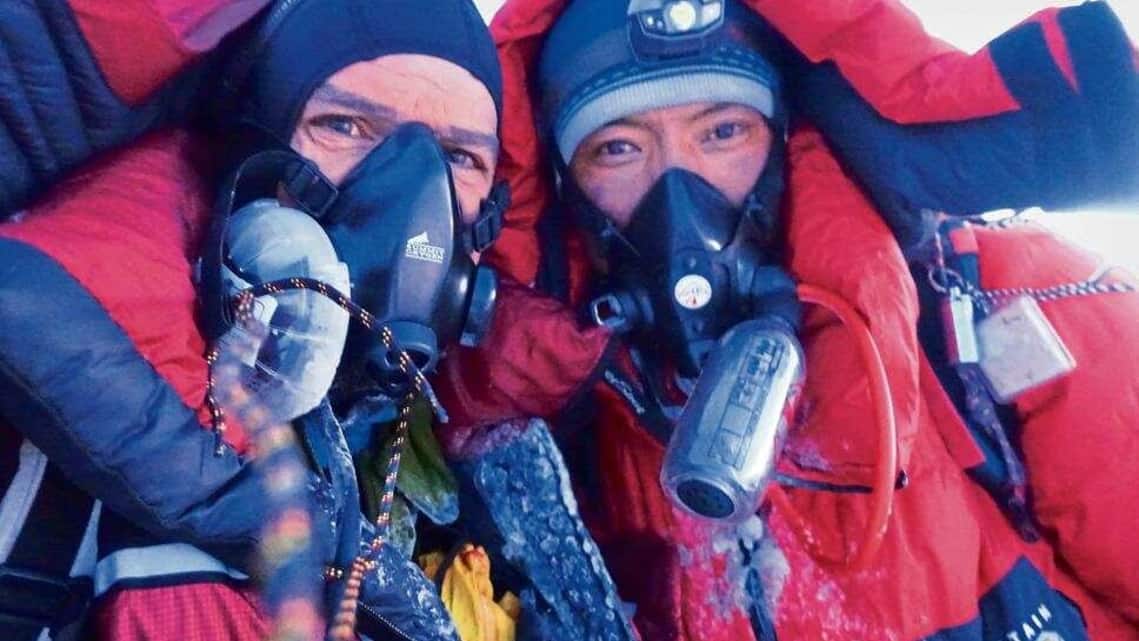 Jim Davidson (left) and P.K. Sherpa on the Everest summit on 22 May 2017. (Courtesy Jim Davidson)

Four decades after he had first spotted Mount Everest in a book, American mountaineer Jim Davidson, now 58, landed at the base of the mountain.

On 25 April 2015, he set off for the summit in the dead of night with his guide, Pasang Kami Sherpa, and soon entered the Khumbu Icefall. As the first rays lit up the world of ice and snow, they reached the site where 16 workers had been killed a year earlier. Davidson kept calm as he negotiated the terrain of gaping crevasses and towering seracs. Five hours after starting from base camp, they reached Camp 1. It was time to catch some rest.

Davidson had just about settled into his tent when he heard a rumble, getting louder by the second. Avalanches tumbled from the slopes. Before the trained geologist could gather his bearings, his tent had been tossed in the air, a momentary hang time, before dropping back to the ground. Then it struck him—he had just experienced an earthquake at 19,700ft.

“When my tentmate and I scrambled outside, we couldn’t actually see the avalanches due to midday clouds. It made the situation even scarier. I thought we may be dead in another minute when the debris overran our camp. Images of my wife and children flashed through my mind but I tried to focus on doing everything I could to increase my chances of survival,” Davidson says.

The 7.8-magnitude quake that wreaked havoc across Nepal in 2015 had made its presence felt on Everest. His dream was over in a flash. The experience tormented him even when he was back in the US. It took a massive effort to return to the mountain two years later and finally climb it. It’s a journey that he painstakingly reveals in the book The Next Everest.

“A small part of me was disappointed but it was not hard to brush that aside quickly. During the disaster, survival was paramount. And helping Nepal was far more important than any recreational climb,” he says.

It was what life had taught him. Even before he approached his first mountain in 1982, Davidson had taken to heights while assisting his father with outdoor painting jobs. During one climb up the side of a church, he was handed his first important piece of advice: “Focus on the climb, not the drop.” Another time, he was left gasping for breath while cleaning a sewage treatment chamber. He experienced his first tragedy as a graduate student, losing his climbing partner, Mike Price, in a crevasse fall on Mount Rainier. Survivor’s guilt gnawed at him but he eventually got back to climbing.

“Over time, I came to understand that I could honour him by living a full life—helping others when I could and striving to be a good teammate, both on and off the mountain. These commitments let me reshape the trauma into post-traumatic growth to fuel climbing and my life in good ways,” he says.

It took him to the Khumbu valley in Nepal, the home of Everest, for the first time in 1992. The climbs continued and in 2009, he scaled Cho Oyu, the sixth highest mountain in the world, and the highest he had climbed till then.

By 2014, the plan to attempt Everest had taken shape. But there he was, a year later, his plans wrecked. He knew there would be aftershocks and that the immediate need was to get off the mountain. “My two degrees in geology helped me have a realistic assessment of the dangers and after-effects. Once the tremors stopped, I had a good idea about the size and frequency of the aftershocks we could expect. Though the insights were quite scary, I was able to share the information with our expedition leaders, which helped them make critical decisions. In every emergency, it is important to be realistic as well as optimistic.”

A helicopter evacuated them to base camp a couple of days later. Every moment thereon was dedicated to lending a hand. He helped dig through debris to recover supplies, carried dead climbers in a tarp and got together with his team to rebuild homes in a village.

Once back in Kathmandu, Davidson had a good look at himself. The many weeks in the mountains, and the trauma, had given him a deep sunken look. It had taken a toll on his psyche.

But there was still work to be done. Once home, he appeared in interviews to raise awareness about the tragedy and showed up at fundraisers for Nepal. “It was difficult to repeatedly narrate the terrifying story, recreating it in the book was even more emotionally trying. But I want people to know what the deadliest day on Everest was like. From every situation, good or bad, we can distil some knowledge or wisdom to carry with us for the next challenge or opportunity ahead. We must always seek to become more resilient for the next Everest in life,” he says.

A year later, Davidson heard that his teammates had climbed Everest. There was a burning desire to chase his own dream one last time. He spoke to family and friends. “Although they worried about me returning to climb the mountain, they understood how I see challenges as a way to refine myself into a better version of me. So they supported me even if it entailed some risk,” he says. “I take family photographs and messages with me on every major climb to remind myself to be careful, to endure whatever happens, and to return home.”

Besides his own story, Davidson has also worked to dispel misinformation about Everest, issues such as crowding, trash and human waste. He continues to climb, though most times away from big mountains and big expeditions. He has made his peace with death, choosing to live in the moment instead.

In today’s world of commercial expeditions, climbing Everest has often been trivialised. Those who have been there are well aware of what’s it like to spend weeks at base camp, getting the mind and body ready for the job. And a few like Davidson know that feeling of being caught smack in the middle of a natural disaster, bracing for the worst and embracing the good fortune of walking away with life.