This summer, there’s probably going to be an unusual addition to all those thrillers, crime novels and celebrity biographies that you usually see on summer reading lists and, consequently, on the beach. Or wherever it is that people in your city read when the sun is out and the days are long. And that book is called The Mixer.

This week, I’ve been reading Michael Cox’s engrossing book on the history of tactics in the Premier League. For football fans who have read and reread Jonathan Wilson’s football tactics best-seller Inverting The Pyramid, Cox’s book is very welcome news. Wilson’s book is, and will always be, a landmark in the history of football writing. All good books on sports tactics are, above all, good histories. Football tactics, like military strategies, have a past, a present and a future. They are not so much artefact as articles of faith. They emerge in response to past experience and in anticipation of future challenges. They are, thus, historical.

And Wilson’s book is built on a foundation of fine historical scholarship of the sport. Indeed, on his website Zonalmarking.net, Cox himself attributes his interest in tactics to both Wilson’s book and the abominable state of affairs in British football punditry. Cox’s book adds to the excellent work he already does on both fronts: His tactical writing on football matches is always enjoyable, and his appearances on footballing podcasts are never without new illumination and new perspectives.

Three things shine through in Cox’s work. First, he has an unwavering focus on the tactical content of football and football matches. Consider, for example, Cox’s tactical review of the Champions League final on his website. There isn’t a single unnecessary line to be found. What this obsession with tactics enables Cox to do is make counter-intuitive observations and take unique perspectives on the unfolding, dynamic choreography that is a football match. Second, Cox has no time at all to waste on footballing clichés, transfer-market buzz or dressing-room gossip—the stuff that is the life force powering banal TV punditry. And third, Cox, like all proper experts, has no problem admitting that he doesn’t understand everything.

All of which might make Cox sound like a somewhat curmudgeonly tactical analyst (and he is very capable of brutal Twitter put-downs). But his writing is, in fact, very enjoyable. And this is particularly the case in a book like The Mixer, which gives Cox a wider canvas than usual to work with. In describing the zeitgeist of the year 1996, Cox refers to the debut of the “loud, extroverted Spice Girls". Ain’t no droll like a deadpan droll. 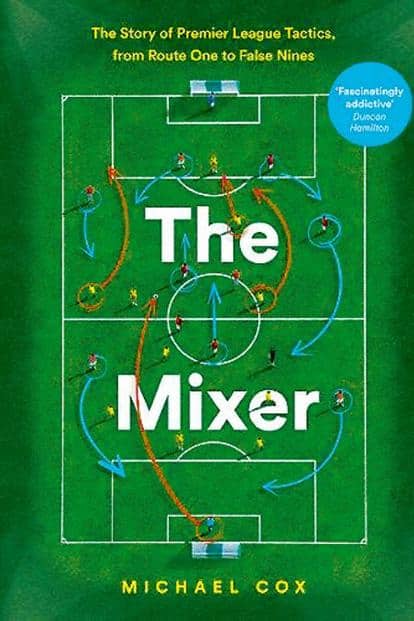 ‘The Mixer’ starts with the launching of the Premier League in 1992.

The book starts, of course, with the launching of the Premier League in 1992. The restructuring of top-flight English football came at a time when the sport had hit something of a low watermark. Cox quotes a 1985 Sunday Times article which called football “a slum sport played in slum stadiums, increasingly watched by slum people".

Things have, as they say, changed a little. In 2016, Sky Sports paid £11 million (around Rs90 crore), on a pro-rata basis, for the rights to broadcast each Premier League match live.

But how did tactics transform along with the finances, profile and profitability of English football itself? That is the story that Cox tells in The Mixer. In typical Cox fashion the story starts, somewhat unexpectedly, with Peter Schmeichel, the goalkeeper, Eric Cantona, the philosopher, and Newcastle United, the entertainers. The first phase of the tactical transformation of English football in the Premier League is told through these three stories.

This is a book, it must be said, that football fans of a certain level of obsession will enjoy most. The names, scores and dates come at you with alacrity. Consider this passage: “Ahead of a mid-April meeting with Aston Villa, Keegan realised Brian Little was using three centre-forwards—Dwight Yorke, Savo Milosevic and Tommy Johnson—and therefore instructed left-back Beresford to defend narrower, helping Newcastle’s two central defenders. Beresford, however, complained that Keegan was ignoring the knock-on effect; Villa’s right-back Gary Charles would…"

And so it goes on. Think of this detail as the price you pay for the enjoyable experience that it all adds up to. The Mixer is the kind of book that will have you sitting up late at night alternating between text on a page and football clips on YouTube. In other words, it is the best kind of book.