Book review: Friend Of My Youth

Amit Chaudhuri's new novel is about friendship, boyhood and Bombay

For a book that heaves with nostalgia, Friend Of My Youth is a study in restraint. And perfectly sculpted sentences, which are deployed to revisit a boyhood, observe a city, mock the conventions of a genre, demolish sentimentalism.

Amit Chaudhuri’s new novel is ostensibly about a novelist called “Amit Chaudhuri" on a book tour in Bombay (now Mumbai)—the city of his childhood. He expects to meet Ramu Reddy, the novelist and narrator’s “…oldest surviving friend in Bombay", whom the narrator contextualizes immediately, to establish the tenor of their relationship: “We argue a lot: it’s not unequivocal affection. He’s irritating. I have delusions of grandeur. But we’re both reliable." Ramu, an off-and-on junkie, has voluntarily gone into rehab in Alibag, and the author-narrator finds himself alone with that other friend of his youth, Bombay.

In an essay titled “The View From Malabar Hill", from his collection Clearing A Space: Reflections On India, Literature And Culture (2008), Chaudhuri mentions an urgency to return to what he describes as the “city proper", or the south Bombay of his childhood. Chaudhuri’s parents have moved from this “city proper" to suburban Bandra in 1984, and Chaudhuri has left to study in England. And while Chaudhuri, on his visits to India, discovers “…Bandra, with its churches, its low houses built on Portuguese lines, its lanes named after Christian saints…", it is the buzzing southern parts of Bombay that Chaudhuri, and his parents, crave. “An obscure set of motives and compulsions drives people towards the hub of Bombay, or toward some place from which that hub is reachable; one of the compulsions, and a pretty basic one, is to breathe its air." The air, which Chaudhuri describes as “…bracing with the odour of dried fish…" in some places, and in others “odourless with chemical pollutants", is nonetheless addictive. “What we’re speaking of, then, is an addiction, such as the twentieth century was to Amis’s John Self; something corrosive but indispensable to the addict." 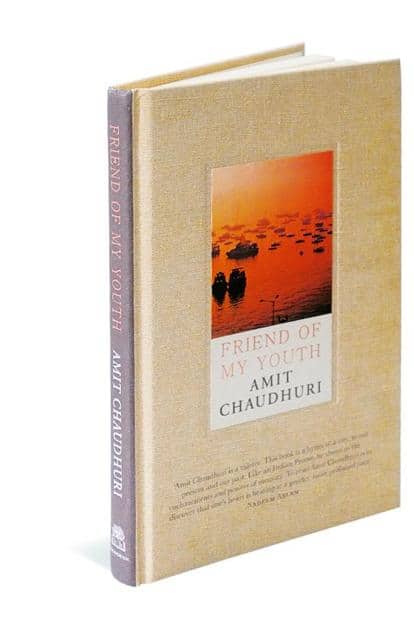 Friend Of My Youth, then, is also the narrative of an addict, who slips chronically into Bombay and overdoses on its parks, its bazaars, its buildings, colleges and clubs. “With nothing to do, with Ramu absent, I go out for a walk," says the author-narrator, as a prelude to seeking his particular fix. A provisions store triggers the memory of biting into slim bars of Cadbury’s milk chocolate; he crosses the road and is confronted with a building that “…came up out of nowhere in the late seventies and partially blocked our view". The building, like the narrator’s boyhood, is “…an interloper—a tenant on the landscape…", encroaching upon the city as it exists now, Mumbai, where everything is altered but is somehow still the same. Like Joy Shoes at the Taj Mahal Palace hotel in Apollo Bunder, where the author-narrator arrives to exchange pairs of shoes for his mother and his wife. Or the hotel itself. “There’s a great bustle outside the Taj. Once it had to do with chauffeurs arrayed there, waiting for the sahebs. Now it’s the new security regime." In a sentence, the reader is made to reconsider the author-narrator’s motives—is he here to exchange pairs of shoes, or is he here to reconstruct the Taj a few years after the 2008 terrorist attacks?

The Taj is a scrapbook of memorabilia for the author-narrator: The Harbour Bar is where the owner of Strand Book Stall took him and his wife, for lobster chilli pepper in 1993; Golden Dragon was where he first held a pair of chopsticks, “…but never learnt to use them". Another cryptic sentence tells of the hotel under attack by a group of men armed with AK-47s, ammunition and grenades: “A few people were killed here." Terror, and the politics that underlies it, is acknowledged fleetingly; the real tribute is offered to survival, and to continuity. Staring at the photographs of celebrities, the author-narrator observes: “They’ve returned, affirming continuity: of what was, and will be. The attacks, for them, are just a blink of the eye. In fact they’ve been through much more than the attacks. Bill Clinton, John Lennon, V.S. Naipaul, Nehru. Even Shobhaa De, larger than the rest, Cleopatra-like on a sankheda chair. They are the true survivors. They’ve known the fickleness of fortune, the travesty of renown—and are still with us."

Chaudhuri has excavated his memory in his earlier fiction as well. His first, A Strange And Sublime Address, published in 1991, is 10-year-old Sandeep’s memory of a summer vacation spent in Chhotomama’s house in Calcutta. Afternoon Raag, out in 1993, is a disjointed memoir—like a slide show of images painstakingly crafted with sensory details. The Immortals, published in 2009, recalls young Nirmalya, who abhors the trappings of wealth and privilege that he is born into, and can’t seem to understand why his music teacher Shyam Lal aspires to it.

The Immortals is also the book that journalist Nilanjan is keen to discuss with the author-narrator of Friend Of My Youth. Nilanjan has arrived at the Bombay Gymkhana, where the author-narrator is staying, from Malad, armed with a recording device, which he switches on before asking his first question: “It’s nine years since you published your last novel. Why the gap?"

The conversation that ensues, in which the author-narrator lays out Frank O’Connor’s guidelines about a novel’s duration and the arc of a character’s life, is perhaps a distillation of Chaudhuri’s essay, “Huge Baggy Monster: Mimetic Theories Of The Indian Novel After Rushdie", from Clearing A Space. The essay demolishes certain assumptions about Indian novels, in an era after the publication of Midnight’s Children. “The first is the tautological idea that since India is a huge baggy monster, the novels that accommodate it have to be baggy monsters as well."

Friend Of My Youth has 135 pages (137 if you include the Acknowledgements page). But it is a lovingly inscribed arc of the life of a friend, who disappears, only to resurface, so that the business of strolling through the city of one’s boyhood is no longer a lonesome one.