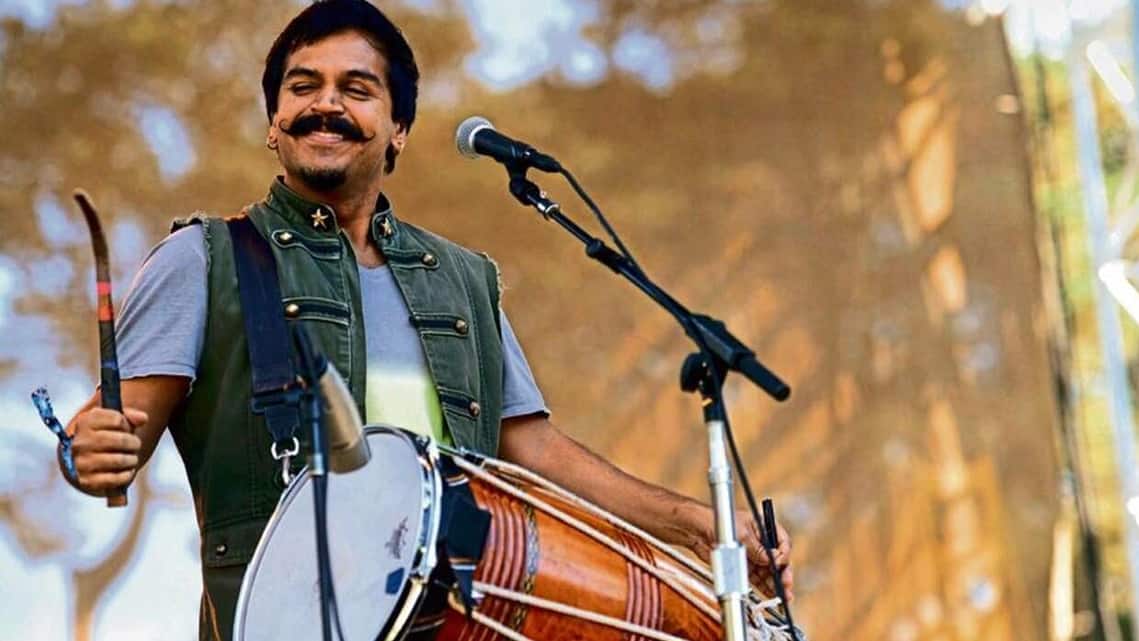 My first encounter with the music of Sunny Jain, the Brooklyn-based Indian-American dhol player and band leader, was via Red Baraat, a project he began in 2008. Red Baraat, as the name would suggest to South Asian readers, has at its core the sort of music you would expect to hear during Indian weddings, particularly in the northern part of the country. Red Baraat’s music was an upbeat melange of sounds: bhangra, funk, pop, brass band jazz…just about everything.

On one of their earliest albums, Chaal Baby, the tracks were improvised riffs on tunes that would be familiar to anyone who has been acquainted with the lavish loudness of a Punjabi wedding. The opening track’s title, Punjabi Wedding Song (Balle Balle), left nothing to the imagination. And among the rest were titles such as Tunak Tunak Tun, Mehndi Laga Ke Rakhna, Aaj Mere Yaar Ki Shaadi Hai and Dum Maro Dum. And while all of these got more than just a bit of jazz and funk treatment with deep upright bass lines, saxes and trumpets, and so on, their origins, based on familiar compositions by Indian composers and musicians such as Rahul Dev Burman, Anand Bakshi, Daler Mehndi and Anu Malik, were unmistakable.

Also Read: Why Vijay Iyer is precious to contemporary jazz

Red Baraat may have had an exotic allure for Western audiences but I must admit that their music left me cold. My appetite for wedding music of the sort that they played is, let’s say, not huge. Then, several years later, I stumbled across an earlier project of Jain’s. This one was from the early 2000s, called the Sunny Jain Collective (SJC), and it included, at various points in time, jazz musicians such as the pianist Vijay Iyer, the saxophonist Rudresh Mahanthappa and the guitarist Rez Abbasi—all of whom would go on to become famous in their own right. On Mango Festival, a 2004 album by the SJC, Jain, who grew up as the son of Indian immigrant workers in Rochester, New York, creates a fusion that is an amalgam of Punjabi folk music, post-bop and avant-garde jazz. It is groovy, melodic and laid-back—all the characteristics that make for good jazz.

Jain, who is in his mid-40s, is a versatile collaborator. He has played as a sideman with musicians as diverse as Peter Gabriel, Norah Jones, Heems (the rapper from Das Racist) and Martha Wainwright. He has also been the drummer for the Pakistani Sufi rock ensemble Junoon. But none of his projects or collaborations has been as ambitious or creative as his latest release. Late this May, he released Phoenix Rise, a project that combines art, music, photography and food. The 10-track album, created during the pandemic-triggered lockdown, features as many as 50 musicians. The pianist Iyer is there; the drummer and jam band virtuoso Joe Russo is on it; so are Black Pumas’ Adrian Quesada, Snarky Puppy’s Michael League and many, many more.

The album comes with a 72-page vegan cookbook (with 22 recipe contributions from some of the musicians, paired with photographs) and the proceeds from the entire project will be going to the Center for Constitutional Rights, a US-based non-profit legal advocacy organisation that focuses on activism related to civil liberties and human rights. The 10 tracks on the album span a breathtakingly wide range of genres. There is classical Hindustani music; soul, rock and hip hop; Kathak dance music and Punjabi tunes; and African folk music. That kind of diversity of genres can be fraught with risks. Fusing all those very disparate types of music can easily lead to one big disaster.

Phoenix Rise isn’t one. In fact, it is a well-crafted feat. Take, for instance, the track titled Pride In Rhythm, written in solidarity with the LGBTQ+ community, in which Jain’s dhol, Rajna Swaminathan’s mridangam and Vijay Iyer’s keyboards interact and entwine like an intimate trio. Or in the title track, Phoenix Rise, where Jain’s dhol and Marc Cary’s piano lay down a beat while Lauren Sevian’s saxophone plays free jazz phrases. Or in Ja Ja Re Apne Mandirwa, which features the jazz guitarist Jonathan Goldberger and the Guyanese-American Indian classical singer Ben Parag.

Some of the tracks in Phoenix Rise have a backstory. The New York-based Indian singer Shilpa Ananth is believed to have written Where Is Home while stranded in Dubai, on her way back to the US, during the pandemic last year. She sings it to the accompaniment of Jain’s dhol and an mbira (a traditional Zimbabwean instrument) played by John Falsetto.

Brought up by Punjabi parents, Jain’s musical influences in his formative years ranged from old Hindi film songs and bhajans to the jazz of John Coltrane and Max Roach. In his own music, he attempts to bring those disparate sounds and genres together. And quite often, he is able to do that with rare elan.

Five tracks to bookend your week

2. ‘Pride In Rhythm’ by Sunny Jain from ‘Phoenix Rise’

3. ‘Where Is Home’ by Sunny Jain from ‘Phoenix Rise’