The artist’s work, inspired by this Portuguese word for longing and melancholia, has won the Vogue Hong Kong Women’s Art Prize 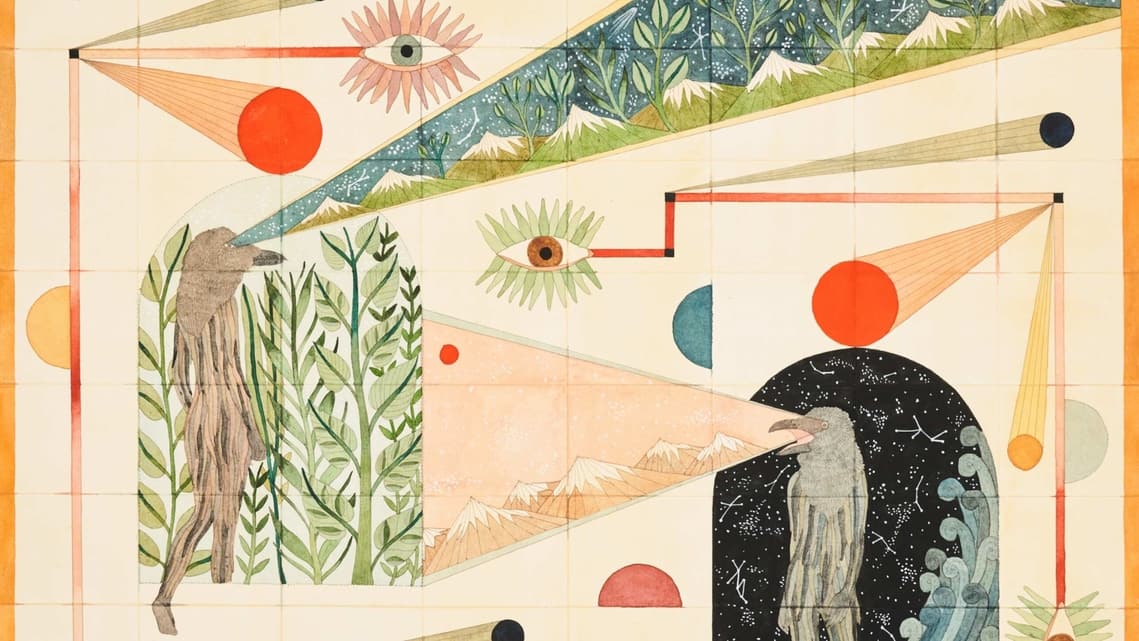 In late 2019, artist Rithika Merchant began work on a new series themed on climate change. The idea was to explore how Earth changed after the advent of humans, and how this process has sped up in recent years. “The series looked at what we will be left with after the anthropocene/holocene, and what we can learn from the simpler times before,” says Merchant. Through 2020, the pandemic added another layer of meaning to the series, which was exhibited at TARQ, Mumbai, earlier this year.

It got embedded with a certain longing for a not-so-distant past when life was “normal”. “I was in Mumbai when the nationwide lockdown was announced in March last year,” says the artist, who shuttles between Barcelona, Spain, and Mumbai. “I was staying with my parents and living in the bedroom in which I grew up. So one ended up ruminating over memories, and there was a yearning to be one with nature again.” This is when she created Saudade, a work inspired by the Portuguese word for deep longing and melancholia, as part of the series.

In her signature style, she drew on iconography from myths and legends, interpreting them in a contemporary context to create a sensitive and reflective piece in which a figure looks out at natural vistas and landscapes. The motif of the eye makes an appearance across the work—as if the figure is contemplating nature from different perspectives and vantage points.

Last week, Saudade won the Vogue Hong Kong Women’s Art Prize as part of the 17th edition of the Sovereign Asian Art Prize, one of Asia’s oldest and most prestigious awards for contemporary art. In a note, the Sovereign Art Foundation says the work “uses symbolism to form a personal visual vocabulary and reflect on a more primordial time, searching for answers in nature”.

Merchant’s works are like jigsaw puzzles, allowing viewers to construct their own narratives while navigating the motifs and symbols. “I am keen to explore the common thread that runs through different cultures and religions. Similar myths, stories and ideas are shared by cultures all around the world. My paintings explore this concept while also featuring creatures and symbolism that are part of my personal visual vocabulary,” reads the artist’s statement. For her, each piece can be seen as a totem that invites the viewer to stitch together their own narrative, drawing on collective memories and signifiers to generate meanings. “I further explore how objects can be markers of identity and how these may be reworked in contemporary contexts as meanings and interpretations change,” she writes.

She has always drawn on experiences and interactions from her extensive travels. The pandemic has brought all this to a halt. “However, even though I am not physically travelling, technology has made it possible to get access to the finest research and reading material,” says Merchant. “For instance, right now I am reading about why it is that only women have been portrayed as winged creatures through history.”

Merchant’s work—including Saudade—emerges from a deep personal response to the events and issues of the time. In a way, there is always an undercurrent of the “political” in her series. “I am not trying to put out a statement but am responding to all that is happening around me,” she says.

Climate change, for one, impacts each of us—a universal idea everyone can relate to. The mass displacement of people in the Mediterranean manifested itself in the 2017 series Where The Water Takes Us. One of her older works was a response to the 2012 Delhi gang rape that came to be known as the Nirbhaya case. “I am a very socially engaged person. Creating these works is a part of how I process these events. The act of painting becomes a way to self-soothe,” she says.

Also read: Those invisible women who labour over kantha quilts

Merchant has always been fascinated with botanical drawings, celestial charts and maps—not just in the way they are created but also the way they are folded. Each crease in the paper carries a meaning for her. It is, perhaps, for this reason, that there is a certain vintage quality in her paintings, even in the way she treats colour—giving it a faded, translucent feel. “In my own work, I usually fold the paper before I begin drawing; then, after I finish the painting, I double it back up along the same creases to store it. Often, I am able to fold it into a smaller geometric shape, so the painting turns into an object. In this way, the paper itself becomes part of the narrative or journey,” Merchant explained in an August 2020-interview to the India Art Fair team.

“I love paper,” she says. “It is such a democratic medium and is available everywhere. It is the same with watercolours. I can carry these along wherever I go,” she says. When she folds the painting, turning it into an object, the architecture of the work becomes an integral part of the narrative. “Maybe, someday, someone will come across these folded paintings in a drawer or a book and wonder about messages from another time,” says Merchant.