Journalist Priyanka Dubey speaks about her book on gender-based violence in India, and the power of a good report.

For over six years, journalist Priyanka Dubey travelled to some of the most remote corners of the country to report on stories of women who have faced rape, assault, mutilation and gruesome deaths. Documenting the inhuman violence in the rural hinterland, where the “national media" (especially English-language platforms) seldom make inroads, she pieced together narratives that amplify the appalling record of gender justice in India. From “corrective rapes" in Bundelkhand to custodial rape and sexism in the police force, her stories paint a bleak picture of procedural breakdown, failure of the legal justice system and, most of all, of the mounting apathy of patriarchal structures towards the lives of women.

No Nation For Women, Dubey’s first book, bears witness to the lives (and afterlives) of the women, young girls and children who suffered terribly, as did their families. Some fought back, others were crushed by the system that was supposed to protect them. A few of them made national headlines—such as the rape and murder of the two Badaun sisters who were left hanging from a mango tree in their village. Others remain relatively less known (such as the rape of three girls in Bhagana village, in Hisar, Haryana). But whatever the trigger (caste, class, socio-economic causes or personal reasons), the broad contours of the crimes remain strikingly similar, as do the cover-ups and the workings of the sluggish judicial machinery that derail many cases or focus solely on punitive retribution, instead of dealing with the rehabilitation of victims.

In an interview, Dubey speaks about the writing of the book, the current scenario of gender justice, and the way ahead for a country, where, as data points out, a woman faces sexual violence every 15 minutes. Edited excerpts:

What propelled you into reporting on gender?

It was the most natural thing for me. I was born in a reasonably conservative north Indian family with zero background in literature, journalism or even reading. It was a controlled, restricted and discriminatory environment and I was curious to know why things are the way they are in my life and in the lives of women around me. My reporting became a tool for me to understand my world.

You have ventured deep into patriarchal spaces to investigate and report. Can you talk about your personal experience as a woman and journalist over these years?

It was devastating and empowering at the same time. During the initial years of my reporting, I would get very angry on field. And I would sob inconsolably while filing. More than the violence, the denial of justice that follows bruises your soul as a human. I still get angry every single time I go out to report a disturbing story, but my training as a reporter has taught me patience. And while strong public interest journalism can sure hasten the process, but law is going to take its time. More than anything else, the resilience of hundreds of people—both men and women—that I spoke to over the years helped me heal.

Delhi, as the locus of power and privilege, is invoked repeatedly by the characters you write about. What does it mean to be perceived as “Delhi media", especially in the areas you go to report?

I don’t feel that I belong to the Delhi media because after six years of working from this city, I still feel very much an outsider here. But yes, I do believe that Indians living in the geographical corners of this country feel that the issues affecting their lives are not reported on properly by “mainstream" Indian media, which essentially means “Delhi media" because most of the national media houses are headquartered there.

Are gender-related crimes substantially differentiated by the urban-rural divide in India? Or are there slippages, and the causes, on both sides of the divide, remain more or less the same?

In my limited experience, I feel the slippages and causes on both sides of the divide remain somewhat the same except for the fact that the close-knit patriarchal fabric of rural Indian life makes the challenge of speaking out and sustaining the long, arduous legal process of seeking justice just manifold tougher for women at every step. I know many survivors from rural backgrounds who wish to move to cities, seeking refuge in urban anonymity.

The Nirbhaya incident is seen as a watershed moment for gender justice in India. As a journalist, what is your view of its effect on ground realities since the legal changes that came in its aftermath?

I think the biggest difference is that the long-pending conversation on violence against women is finally happening. Stories about violence against women are finally making to front pages and the subject has got its long-due acknowledgement of being an urgent crisis of our times. But this is just the starting point. We have a very long way to go before women are not blamed for the crimes happening to them.

With the MeToo movement taking off on the internet, is there a trickle-down effect via social media channels (such as WhatsApp) among a section of the vulnerable rural population you write about?

By the time MeToo hit the headlines in India, the reporting and writing of this book was over. I have not reported on MeToo but I have been following the movement as a journalist. MeToo is still a very urban and English phenomenon but that does not make it any less important. I cannot see the trickle-down effect happening yet. It might take time but I suppose it should happen eventually. 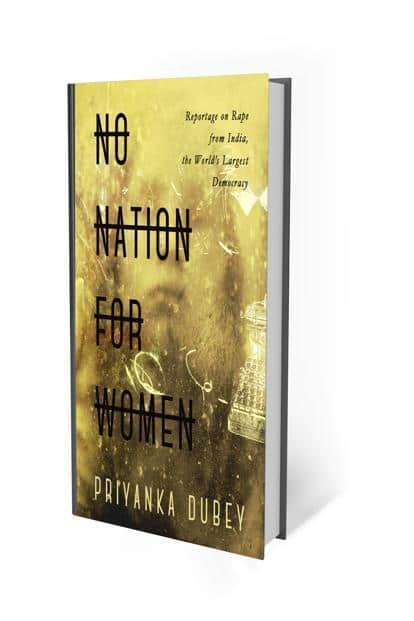 What does solidarity building and creating circuits of empathy mean in the context of the work that you have done, especially with regard to the lives of some of the most disenfranchised people?

Honestly speaking, I never thought of this book in terms of building solidarity. As a reporter, I stick to my brief of investigating till the last thread and presenting a true, comprehensive, and uncompromised picture to the reader. I have deep faith in the power of a good report. If done properly, it will automatically do the job of speaking for the most disenfranchised and building circuits of empathy among people. This is where the importance of reportage-based non-fiction comes in.

What is the toughest part of bearing witness? How do you deal with the rage and frustration that accrues as a result of immersing yourself in such situations?

I do feel that the book took a toll on my emotional health, especially because I had to listen and re-listen to lots of tape recordings and keep going back to spot photographs while writing. It is traumatic and affects your everyday functioning, including your personal relationships. Looking back, I don’t think I recognize the person that I was when I started out. I feel I have gone through a sort of mutation process in just one life. More than reporting, the process of writing was lonely. My training as a reporter helped. But there were times when I thought I would never be able finish this book. And when I finally did, I neither felt happy nor sad. I was just numb, dried up and absolutely exhausted. So tired that on the day my publishers made the first public announcement of the book’s release, I simply went to a café in my pyjamas and read Nirmal Verma, my favourite author.